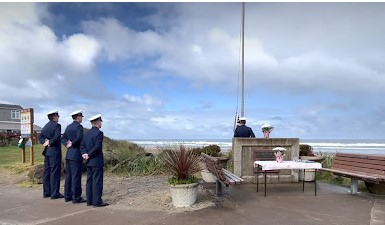 With blue sky on the horizon, volunteers anxiously waited for the rain to pass so they could set up the memorial for our Fallen Veterans. Flowers and table setting were placed around the Veterans Memorial at Ocean Edge wayside in downtown Rockaway Beach.
At 9:30am, Master of Ceremonies Rick Cheek, broadcast the Star-Spangled Banner as the USCG Color Guard Tillamook Bay Station, raised the Flag. Mayor Sue Wilson welcomed everyone with a heartfelt remembrance to our Veterans that made the ultimate sacrifice for our country. Heads bowed as Pastor Justin McMahan from Living Water Fellowship, delivered the opening prayer.

Mr. Cheek then introduced Nicholas Torres, Veterans Service Officer for Tillamook County. Mr. Torres is an Afghanistan Campaign Veteran. He informed us that 2,500, approximately 10 percent of Tillamook County, consists of veterans. He gave a history of Memorial Day, formerly known as Decoration Day. He then read the names of Tillamook County Veterans who died in the past year (see list of Veterans below). The list was long for such a small county.


Mike Kingsbury was then introduced. Mr. Kingsbury is a Vietnam Veteran, 1st Infantry Division Recon Platoon. He reminded everyone that over one million Americans have died for our country and freedom. “One million is a number. It’s real easy to say wow and move on. But every one of those numbers has a name. It’s important to remember that”. Mr. Kingsbury went on to mention the names of four of his friends that did not make it home. He then read part of a poem, “We Remember Them” by Sylvan Kamens and Rabbi Jack Riemer.

Pastor McMahon led the closing prayer for those who gave the ultimate and the families they left behind. He concluded with a verse from Issai:61 followed by a moment of silence. TAPS sounded over The Oceans Edge for those who are gone but not forgotten.

Here is a video of the presentation:


List of Tillamook County Veterans deceased from May, 2021 until May of 2022