Editor’s Note: The story continues, through the decades of the Rockaway Beach Train Depot – the ’30s and ’40s are rough years. Missed the introduction, Chapters 1 and 2 – see below for links.

By Virgina Carrell Prowell
The Thirty’s were crucial years for the town as well as the nation. In the winter of 1931-32, bitter cold from the north swooped down on the town and made life miserable for everyone except the children who took advantage of the frozen Lake Lytle. Marion Hulse’s (Drollinger) dad put a pole in the lake which froze into the ice, then tied a rope to it and skated around it pulling all the kids on a sled. They called it their “Merry-go-round.”

Lumber mills were closing everywhere putting more men out of work; the depression was really beginning to affect this part of the country. If those problems were not enough facing the people, in 1933 the news of the big forest fire came over the wires. Although the fire was miles from the beach area, it wasn’t long before we began feeling the effects. The sky turned black with smoke and ashes fell all over the beaches. In places, it was 2 feet deep and ashes were even being reported by ships 500 miles out at sea. It was so dark, even the chickens went to roost in the middle of the day.
Many of the unemployed men went over the mountain to fight this terrible blaze that lasted 11 days. The opportunity to find employment was a shallow blessing and a tragic loss of over $100,000,000 to the State of Oregon. Tillamook County was the hardest hit with 82% of the burned timber. It was reported that 10 billion board feet of merchandise able timber went up in smoke. There were 90,560 acres of dead timber and 13,360 acres of green timber left. 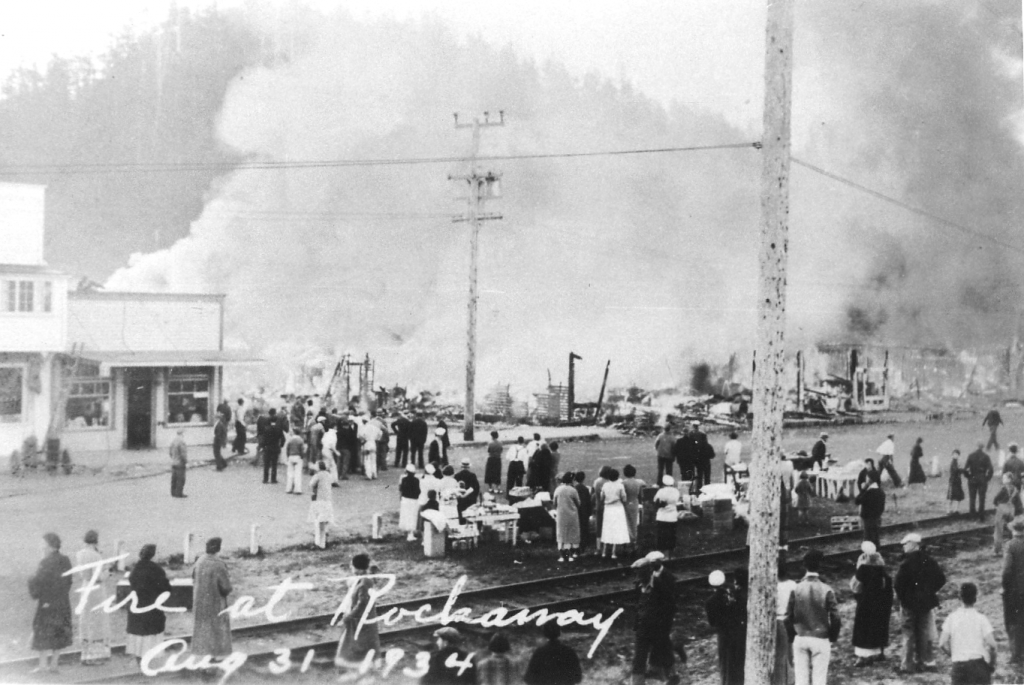 It was just a year later that another fire, this one in our own town, struck havoc and fear that the entire town would go up in smoke. Early on the morning of August 31, 1934, fire erupted apparently from the bakery and spread southward and engulfed nine businesses. The entire town, awakened at an early hour, came to try to put it out. It was to no avail, however, because without a fire department, the bucket brigade was just not fast enough to contain the blaze of the all wooden structures. I’ll tell you, every splinter of my timbers was shaking in fear the winds would shift and the fire would set my wooden structure ablaze too. This was one of the worst Labor Day weekends ever for this city. The townsfolk were a sturdy lot and soon were all working together to clear away the burned debris and get on with life in general.
Mr. Monk, who had the grocery and dry good store, started rebuilding right away. Newell Olson, the barber, had his shop in Monk’s building too. He moved his barber shop into the Wood’s photography building until Monk got his building up. Part of Monk’s building was brick, so Newell and some of the other men around town helped Bill Monk scrape the bricks for the new structure.
It was the fall of the year when Bill started his building and of course with fall comes the stormy weather. He had just got pretty well under construction when one of those infamous southwest winds came along and blew over his new building; but like I said before, these were stout-hearted individuals. He started all over and finally got a good building erected before winter set in.
The people who had the bakery, Jack and Jean Treblehorn, moved back in 1935 and rented the old bootleggers building and set up another Rockaway Bakery. Of course, the building was just across the street from me and the fresh baked pastries filled the air with delicious aromas that beckoned the station master and baggage man nearly every morning.
This talk about the highway over the Wilson River has really taken on serious dialogue. H.T. Botts has been the main one to spearhead this highway. He seems to think the automobile is a better mode of travel. Some-times it’s hard to figure out what these smart people are thinking.
President Roosevelt is trying hard to get the nation back on its feet and is sanctioning a great many projects throughout the country. He has just signed a bill to appropriate money for the building of the Wilson and Wolf Creek Highways.
Here it is 1937, passenger train travel has certainly slackened off in the past few years. It is really concerning me and I can’t figure out if it is because of the auto-mobile or if it is the depression. Whatever the reason, there is definite talk of closing down the station. It seems only yesterday throngs of people were tramping over my platforms. The last 25 years have been good for the town and I’ve been proud to be a part of it. I hear the train coming. They say this will be the last passenger train to pass through here. It really saddens me and I wonder what will become of me. Certainly after a summer with-out the train, the Railroad people will come to their senses and put the train back.
It is 1938, still no trains except a few freight trains, but no one is stopping here. They must really be serious about keeping my doors closed.
Today they have come in to take away the benches, the old pot belly stove is going out the door too. They’ve been in the office all day sorting through things and packing up everything into wooden boxes. It looks pretty grim for me … OH NO! Not that! They have boarded up my windows!
The laughter and chatter I had become accustomed to have silenced and I only hear the splashing waves and the sound of the infernal cars and trucks. Once in a while a fellow down on his luck will take refuge under my structure for the night, but he is gone too soon and I’m left alone again.
Another year has passed. The cold winds beat against me all winter. There is no old potbelly stove to stoke up and keep my timbers dry. The paint on the out-side is fading and pealing. I’ll be glad when the warm spring and summer sun comes out to warm me up. Surely this year they will re-open the doors and put the passenger trains back. Maybe a fresh coat of paint inside and out would help me out of my depression. I know all my timbers are sound; I’m not ready for the torch or the wrecking ball yet.