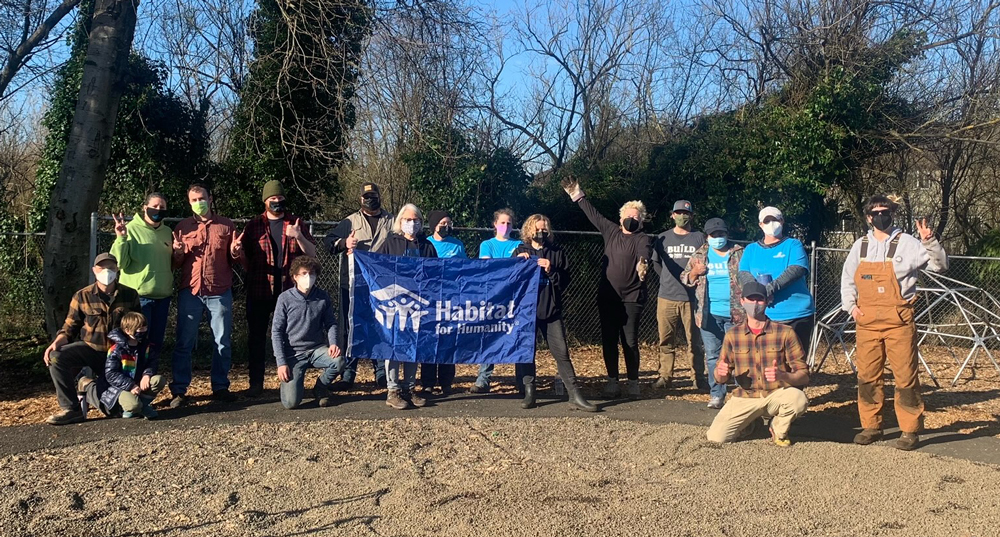 By Don Backman
On January 17, 2022, it all came together at Tillamook Early Learning Center. Volunteers from numerous parts of the community: Tillamook Early Learning Center (TELC), Tillamook Bay Community College (TBCC), Habitat for Humanity, the Community Action Team, Head Start, and Tillamook County Search and Rescue met for a day of service and to clean up and renovate the grounds at the TELC building at 110 Miller Avenue in Tillamook, perhaps better known as the Corner of 12th and Miller by the high school. 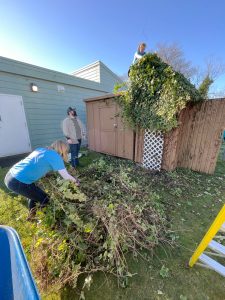 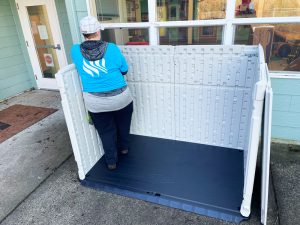 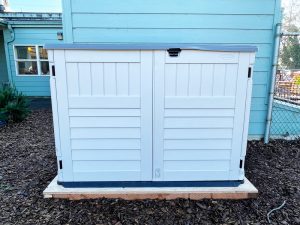 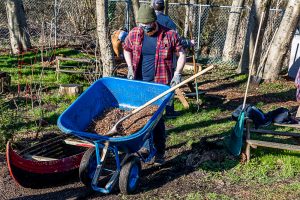 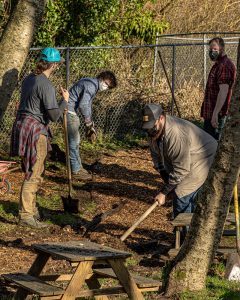 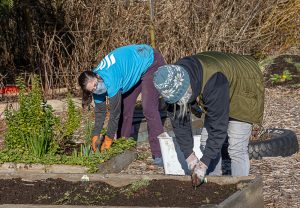 Volunteers JoAnn Critelli and Clare Sobotka, from TBCC, were out front, crouching and kneeling and digging out blackberries and other roots in the raised bed gardens. A large contingent of TBCC volunteers attended, some wearing their blue TBCC T-shirts. In the back, other volunteers were loading wheelbarrows with bark dust and wheeling it over to the fenced-in play area, where another group of volunteers who had been digging out and packing pea gravel to rebuild the trail, were now spreading it out. Thomas Adams, a volunteer from the Forestry Class at TBCC, was busy using a grub hoe, a wildland fire fighting tool. “I’ve removed six or seven stumps,” he reported. He was now working to pull out sections of rebar that were sticking out of the ground where landscaping boards had rotted out. A small pile lay at his feet. 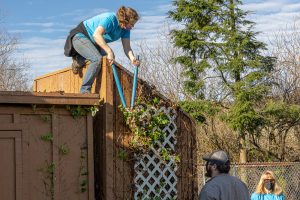 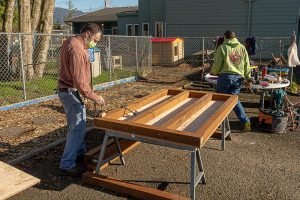 Dawn Crawford, Associate Director of the Child and Family Development Programs of the Community Action Team, explained the many projects which were going on. “They’ve pruned the trees back,” she reported, pointing out of the freshly cut limb bases on the trees. “The forestry class at TBCC researched to determine how to put the bark dust down and protect the trees. Especially the Hemlock. They found out that bark dust shouldn’t touch the tree.”

Julia Giles, from Habitat for Humanity, took time from working to talk about how the different groups have found that by working together they can cover many different community needs. “Habitat can maybe build one or two houses in a year,” she said. “We completed 24 ramps and rails projects on 24 houses, and repaired leaky roofs.” She explained that Habitat can’t afford to repair roofs, for example, but they “… Can work with other groups such as the Community Action Team which may be able to find grants, and then roofing contractors can be hired to oversee the work.” It is easy to see that these projects help keep many more people housed in the community, especially senior citizens who can continue living in their homes.

The grounds around the Tillamook Early Learning Center look much better and are more functional for the children, and Head Start has new storage sheds thanks to this hard working crew.