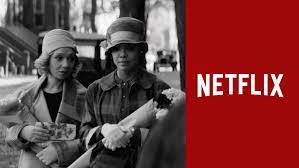 By Karen Keltz
I watched the film “Passing” on Netflix several days ago. It is not the typical, formulaic American movie. From the beginning, with legs walking from the calves down, first in the mist and then coming into view, the way it was shot felt familiar, and then I realized why. Director Rebecca Hall had chosen to film Passing in the same way as Jean Cocteau had his film “Orphée” in 1950, the way Federico Fellini did his film “La Dolce Vita” in 1960, and the way Ingmar Bergman filmed “The Seventh Seal” in 1957. The film is about black and white issues and is shot in black and white, dark and light, and often, as the lives of these characters, somewhere shady in between.

The viewer never knows exactly, precisely, what the director, through the actors, is trying to say. The main character, Irene, is often in a dreamlike or drugged state. More of that shade. It is difficult to tell exactly what characters are thinking because there is no dialogue to inform the viewer. Instead, there is a plethora of close-up shots that are evidently supposed to inform us.

Scenes are disconnected, episodic, cloudy, nebulous, as in other films of an existential nature. The characters do not find peace in easy answers.

Irene, played by Tessa Thompson, passes as white on a trip into town, as the film begins, and the contra-character, Clare, played by Ruth Negga, passes for white in her marriage to a man who declares he hates Blacks. You see that Irene was having fun and will go back to her Black life in Harlem, but that Clare is a daredevil who enjoys living on the edge as a white woman.

Black and white is not the only issue of passing in this story, however. Without being direct about it, Hall lets the viewer know that Irene is also passing as a wife, that she is intrigued by her relationship with Clare and flirts with danger in the same sex arena.

For that matter, Irene’s husband, Brian, is also passing as a loving, caring doctor, when he would much rather not be a doctor for those he serves. Clare’s husband passes for someone genteel, when he is, instead, something quite sinister.

If a viewer were introspective, then the question to ask oneself might be, “How am I passing?” The film stands as a moral tale to say stop trying to be something you are not, because (spoiler alert) all does not end well when you try to pass. But what if you have not explored all the possibilities of who you are? One might also see that how to live one’s life is never as clear as black and white.