EDITOR’S NOTE: We have included a couple photos from the accident scene. The Pioneer’s policy is usually to not include accident photos due to the trauma it can cause the accident victims, their families and others that have experienced an accident. We are including images from this accident as the cause appears to be an intoxicated driver (alcohol/drugs) and as a stark reminder that drinking/drugs and driving DO NOT MIX. Everyone was fortunate here – PLEASE, PLEASE DON’T DRINK/DO DRUGS AND DRIVE – the life you save might be your own. 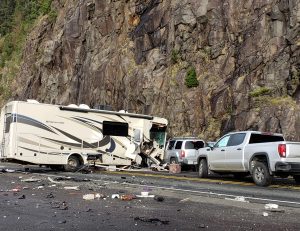 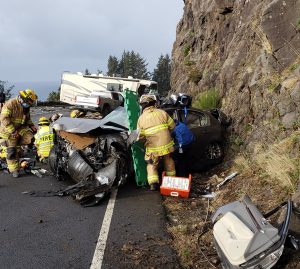 The highway was closed for approximately 4.3 hours. OSP was assisted by Tillamook County Sherriff’s Office, Manzanita Police Department and Nehalem Bay Fire and Rescue. A collision reconstructionist was called to the scene. Multiple empty alcohol containers were found in the Infinity and the driver of that car admitted to drinking and using cocaine that day. Exigent blood was taken from the driver of the Infinity on scene.
The investigation is ongoing.