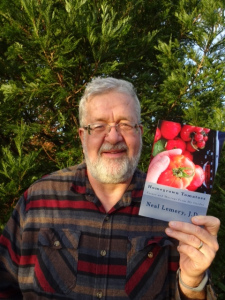 EDITOR’S NOTE: Books – so many books, so little time to read – always a dilemma, and I find myself relying on the advice of other readers. Neal Lemery’s wide-ranging reading provides insight for books to add to gift-giving lists or your own bedside table. Thanks Neal!

by Neal Lemery
Braiding Sweetgrass: Indigenous Wisdom, Scientific Knowledge and the Teachings of Plants by Robin Wall Kimmerer
“As a botanist, Robin Wall Kimmerer has been trained to ask questions of nature with the tools of science. As a member of the Citizen Potawatomi Nation, she embraces the notion that plants and animals are our oldest teachers. In Braiding Sweetgrass, Kimmerer brings these lenses of knowledge together to show that the awakening of a wider ecological consciousness requires the acknowledgment and celebration of our reciprocal relationship with the rest of the living world. For only when we can hear the languages of other beings are we capable of understanding the generosity of the earth, and learning to give our own gifts in return.” (Goodreads)
This is a delightful blend of experiences, viewpoints, and meditations. I found this to be engaging, provocative, and simply fun to read.

The Secret Wisdom of Nature: Trees, Animals, and the Extraordinary Balance of All Living Things — Stories from Science and Observation, by Peter Wohlleben. I loved his The Secret Life of Trees. This is an equally enjoyable book about nature and how living things interact and communicate with each other.
Prisoners of Geography: Ten Maps That Tell You Everything You Need to Know About Global Politics by Tim Marshall. This is a great exploration of world history and current affairs, from the perspective of geography, and how regional and local geography has profound influences on human activities, politics, and culture. Much of today’s geopolitics makes more sense after reading this.

Edge of Awe: Experiences of the Malheur-Steens Country. Alan Contreras, ed. This delightful book of essays, poetry, and photography takes you into the soul of southeastern Oregon. Ursula LeGuin and other contributors are showcased. Great writing and deep thinking highlight this treasure.

The Map of Knowledge: How Classical Ideas Were Lost and Found: A History in Seven Cities, by Violet Moller.
“In The Map of Knowledge Violet Moller traces the journey taken by the ideas of three of the greatest scientists of antiquity – Euclid, Galen and Ptolemy – through seven cities and over a thousand years. In it, we follow them from sixth-century Alexandria to ninth-century Baghdad, from Muslim Cordoba to Catholic Toledo, from Salerno’s medieval medical school to Palermo, capital of Sicily’s vibrant mix of cultures and – finally – to Venice, where that great merchant city’s printing presses would enable Euclid’s geometry, Ptolemy’s system of the stars and Galen’s vast body of writings on medicine to spread even more widely.
“In tracing these fragile strands of knowledge from century to century, from east to west and north to south, Moller also reveals the web of connections between the Islamic world and Christendom, connections that would both preserve and transform astronomy, mathematics and medicine from the early Middle Ages to the Renaissance.
“Vividly told and with a dazzling cast of characters, The Map of Knowledge is an evocative, nuanced and vibrant account of our common intellectual heritage.” Goodreads

An enjoyable and insightful look at history and its teachings and preservation. Very interesting and provocative.
The Moment of Lift: How Empowering Women Changes the World by Melinda Gates. Inspiring, fresh, and provocative; ideas and projects that are changing the world. This is a book of hope and progressive thought. The writing is excellent and I found myself captivated by the seemingly simple ideas and her determination to listen to people on what they really needed to change their lives.

The Path Made Clear: Discovering Your Life’s Direction and Purpose by Oprah Winfrey. Oprah dares us to be hopeful and open to our full potential. There are lots of ideas and inspiration in this, and I found it worthwhile and optimistic.

Leadership in Turbulent Times, by Doris Kearns Goodwin. This examination of challenging events and circumstances of four U.S. presidents gives some much-needed historical insight and perspective on what is great and courageous leadership, and the willingness to be daring and put country ahead of politics.

The Heartbeat of Wounded Knee: Native America from 1890 to the Present, by David Treuer. This is a much needed and appreciated perspective of Native America, a part of our history and culture that is neglected by historians and political scientists. Somewhat akin to Howard Zinn’s examination of under-reported American history, and it belongs on the same shelf of important and timely writings about our past and today.

Sapiens: A Brief History of Humankind by Yuval Noah Harari. Wow. So much I didn’t know and hadn’t thought about. 100,000 years ago, there were six species of humans, and only one has survived. This is the story of how humans came to be, and broadens one’s concept of humanity and cultural development.

Artemis by Andy Weir. The author of The Martian explores the large lunar colony of the future, with an engaging plot and ideas that stimulate one’s thinking about the future and how space travel and colonization may change our thinking. Well done science fiction.

Becoming by Michelle Obama. The best memoir and autobiography of the year. This well written story of her life is engaging, thoughtful, and insightful, no matter what your politics may be. I grew to admire her courage and insight, and drive to improve her life. I found this to be inspiring.

Art Matters by Neil Gaiman. One of America’s finest novelists, Gaiman shares his ideas on how art inspires and changes lives. This is a short but important read.

Some Less Memorable Books
Talking to Strangers: What We Should Know About the People We Don’t Know, by Malcolm Gladwell. His hypothesis is somewhat interesting, but not terribly daring or insightful: we are often deceived by strangers who seek to manipulate and lie to us. I found it repetitive and tedious. But then, maybe I’ve been deceived.
The Pioneers: The Heroic Story of the Settlers Who Brought the American Ideal West, by David McCollough. He’s a thorough historical storyteller, but these tales of adventurers and entrepreneurs who settled Ohio is less than exciting and I think I missed his point of telling this story. Well and thoroughly researched, but this is not a page turner and I ended up not caring about the characters.
On Fire: The Case for the New Green Deal, by Naomi Klein. I was disappointed, as I wanted particulars on what projects and ideas that are “shovel ready” for this political and ecological movement. Instead, this appears to be a collection of blog posts, some quite dated, about general concepts. I wanted actual implemented ideas and stories of success.
The Second Mountain, by David Brooks. Brooks is a thoughtful writer, who is famed for challenging traditional thinking. He begins by challenging Boomers to be innovative and involved. Yet, he seems to lose steam halfway through the book and never gets to the heart of his ideas and show how his premises can work. I was left hanging and unsatisfied.