F-16 Fighting Falcons from the 56th Fighter Wing, Luke Air Force Base, Arizona, will be conducting Dissimilar Air Combat Training (DACT) with the 142nd Wing today through Friday (29 March through 1 April) and again from 5 April to 9 April. This training gives pilots a chance to perform battle flight maneuvers with aircraft that they don’t typically get to train with. Training hours will not vary from normal operating hours and should fall between 8 a.m. and 4 p.m. 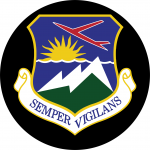 About the 142nd Wing:
The Portland Air National Guard Base employs around 1,500 Airmen who provide an economic impact of nearly $500 million to the region. The 142nd Wing defends our homeland with F-15 Eagle fighter jets, guarding the Pacific Northwest skies from Northern California to the Canadian border, as part of Air Combat Command and the North American Aerospace Defense Command (NORAD). Their mission is to provide unequalled, mission-ready units to sustain combat aerospace superiority and peacetime tasking any time, any place in service to our nation, state and community.