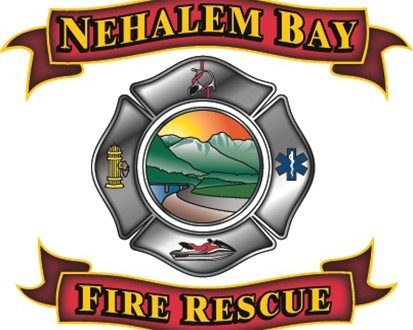 Shortly after its formation in 2009, Nehalem Bay Fire & Rescue District issued a 25-year, $2.6 million bond to fund the construction of two fire stations. Fire chief Chris Beswick is happy to announce that the bond has been completely paid off.
According to Chief Beswick, “Due to the foresight and planning of the Board of Directors and former fire chief Perry Sherbaugh, the district was already on the path to save over $766,000 in interest. Through the hard work and financial acuity of Executive Assistant Kristen Coyle, we were able to increase that savings to over $863,000.”

Chief Beswick cautions that, although the bond is paid that does not yet mean that residents will see a reduction in the fire tax. Paying off the bond required the depletion of the financial reserves, and the future needs of the district need to be considered. For example, plans need to be made for the replacement of fire apparatus, and with the average cost of a new apparatus topping $500,000 it is necessary to place funds in reserve for these inevitable expenses. In addition, decreasing volunteerism and increased calls for service in the community may require the eventual addition of more paid staff.

Chief Beswick closed by stating, “When this district was formed, a promise was made to our community that the district would be managed in a fiscally sound manner, and that the tax rate would be reduced when possible. Although the time to reduce the fire tax is not yet here, we have not forgotten that promise as we continue to ensure the financial stability of the district.”