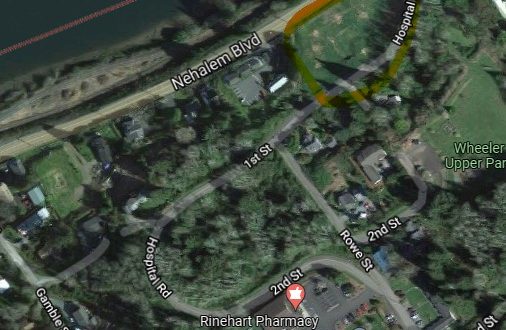 The district has completed acquisition of a 1.3-acre property in Wheeler, Oregon. The property is located across the street from Wheeler City Hall and directly adjacent to Highway 101.
Acquisition of the property furthers the district’s overarching strategy to address a variety of community needs, focused on primary health care delivery, food security and workforce housing for both employees of the district’s facilities and the larger community.
The district looks forward to consulting with the city of Wheeler on the potential uses of the new property, including the possibilities of a new health care clinic and a relocation of the North County Food Bank. Next steps will include close coordination and alignment of objectives with the district’s closest partners, including the Food Bank and the Rinehart Clinic.
The Nehalem Bay Health District is committed to a process that will invite citizen and local government participation so as to consider the diverse needs of the community and to explore equitable solutions while planning for new facilities.

The Nehalem Bay Health District board has a new member. At its regularly scheduled August board meeting, the district board unanimously elected Neahkahnie resident Jacki Hinton to fill the vacancy created by the recent resignation of Barbara Edwardson of Nehalem. Hinton will officially join the board at its September 8, 2021 meeting.

Hinton is a retired attorney who practiced in the areas of regulatory law and commercial litigation. She is a law graduate of the University of Chicago and has a chemistry degree from Purdue University. Hinton has been a full-time resident of the community since 2015 and has been a volunteer with the Emergency Volunteer Corps of Nehalem Bay where she was treasurer, served on the executive committee and helped develop the organization’s strategic plan. Hinton has also served on the board of CARTM and is currently president of the Neahkahnie Community Club.

Edwardson resigned in June due to the increased demands of her work with Portland Metro. She has graciously offered her volunteer services to the district.

“Barbara was a tremendous contributor to the district’s work,” said board president Marc C. Johnson, “and on behalf of the members of our board I want to thank her for her commitment to our mission, and particularly for the extensive work she did to help facilitate the district’s recent purchase of property in Wheeler.”

About the Nehalem Bay Health District:
The district owns and operates the Nehalem Valley Care Center in Wheeler, a 48-bed skilled nursing facility. The Care Center is the only facility of its type on the Oregon coast between Astoria and Newport. The Care Center typically employs more than 40 persons engaged in a variety of health care occupations.
The district also owns the building occupied by the non-profit Rinehart Clinic, a federally qualified health care facility that accepts all patients regardless of ability to pay. The non-profit clinic leases the clinic building from the district.
The North County Food Bank is currently housed in the basement of the old Wheeler Hospital, and the district board has pledged to help the non-profit food bank with a strategy to relocate to a new and more functional facility.
In addition to new board member Hinton, the district’s board includes Lynda Chick of Nehalem and Debbie Moberly of Nehalem and Tom Mock and Marc C. Johnson of Neahkahnie.