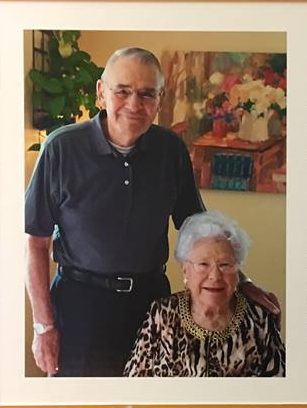 By Dan Haag
On Friday, December 28, Manzanita resident Owen Nicholson and his late wife Ann were honored with an exhibit dedication by the Nehalem Valley Historical Society (NVHS).
The ceremony, held at NVHS, drew over 20 local supporters, friends and family members to witness the unveiling. Among those in attendance were former Manzanita mayor Garry Bullard, current Manzanita mayor Mike Scott, and Nicholson’s son and daughter-in-law.
“Everyone in this room remembers you and Ann and everything you did to make the Nehalem Valley Historical Society something special,” said current NVHS board president Tom Campbell.

Campbell unwrapped a large package that contained a framed picture of Ann and Owen Nicholson along with text thanking the couple for years of dedication and stewardship on behalf of NVHS.


Recognizing the importance of preserving local history, the Nicholsons allowed their home to be used as storage for vital historical records and archives. They also devoted countless hours advocating with Pine Grove Community House and Tillamook County Commission to locate and finance a permanent, public location. Their efforts eventually led to the opening of the current NVHS site in 2006.

The picture will be placed prominently and serve as a highlight of NVHS’ recent efforts to upgrade their exhibits.
“We’re clearing out a whole wall for you,” Campbell said to a long round of applause. “Thank you so much, Owen.”
Attendees took time to share memories on how NVHS turned from dream to reality.

Nicholson reflected on the many years spent pushing for a public site.
“There was a little blood, sweat and tears to get this going,” he said.
NVHS volunteer Lyla Hendrickson reminisced on the hours of work she and Ann Nicholson put in sorting through various documents and archival materials.
“We had an awful lot of fun looking through all the different archives we had,” she said. “Ann would have to stop and tell me about each one for at least half-an-hour.”
Former Manzanita city councilor Leila Salmon recalled the first time Nicholson came to the Pine Grove Board about the possibility of using part of the building.
“It was Owen’s vision,” she said. “He came to the board and said ‘I’ll take your basement and make it great.’”
It was a monumental undertaking, with myriad maintenance issues to address, including fixing various leaks, painting and adding a heat pump.
“Nobody thought it could be done except Owen and Ann,” Salmon said.
Nicholson remains proud of the process and was quick to recognize the variety of help he and his wife received in getting the project done.
“We had an awful lot of people who kept coming back year after year,” he said.