The historic Nehalem American Legion Cemetery, located on Necarney City Road between Nehalem and Manzanita, is a memorial to area residents born in the 1800s, as well as for their descendants. It is the resting place for many veterans of wars, including the Civil War, Spanish- American War, World Wars I and II, and Korean, Vietnam, and Iraq and Afghanistan.
However, it’s not the only final resting place for veterans. Pioneer families buried their loved ones on their property, close to the homestead. That’s where we found gravesites for two Civil War veterans of the Alley family.

John Marshall Alley and his brother, Thomas Jefferson Alley, both sons of an Indiana family, were drafted into the U.S. Union Army to serve during the Civil War, John in 1861, and Thomas in 1863. John was assigned to the 99th Regiment, Indiana Infantry, and his brother Thomas to the 156th Regiment, also Indiana Infantry. They both survived the war, and were discharged in 1865, John as a First Lieutenant, and Thomas as a Corporal.

After being discharged, John and his wife Martha migrated from Indiana to the west coast via New York on a ship that took them all the long way to Panama. From there, they traveled by boat and land across the Isthmus of Panama to the Pacific Ocean. They first stopped in San Francisco, then on to Grass Valley, California, where they lived from 1866 to 1882. During that time, they had two children, Herbert and Olive.

On October 22, 1882 they headed to Oregon where they settled on their new homestead on the North Fork of the Nehalem River, arriving here on October 31. Thomas, five years older than John and a teacher in Indiana, eventually followed his brother to Nehalem.

They built a home and farm, which is still standing and remains in the family, now owned by descendant Helen Knight. John and Thomas might be surprised to learn that 140 years after they arrived here, Nehalem would still be home to 100 of their descendants.

John died in 1911 at the age of 75, and Thomas in 1920 at age of 89. Considering their history in the Civil War, and long, arduous treks getting to Oregon, they lived full and adventurous lives. They are both buried in the family’s private cemetery on the farm where they spent the majority of their lives. 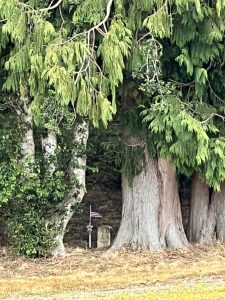 Family plot on the original Nehalem Valley homestead.
Locating and identifying pioneer gravesites is a mission of the Nehalem Valley Historical Society and in particular, board member Eileen Nordquist, who has made it her promise to recognize the many veterans of wars, both historic and modern, who have final resting places in the Nehelam Valley.