Netarts Bay provides an impressive backdrop for memories for those who recreate on this beautifully unique body of water. However, Netarts Bay has  also been the location of many tragedies. On February 11, 2021, two people lost their life after their small boat capsized in the bay and was swept out into crashing waves.
Today, Tillamook County Sheriff Joshua Brown and Undersheriff Matt Kelly, along with Marine Deputies Kelly Awe and Dennis Greiner, attended a brainstorming meeting with other stakeholders to identify some of the issues that contribute to the drownings and water rescues in Netarts Bay.
The hope was to identify solutions that might help lessen, mitigate, or even prevent these emergencies in the future.
The event was hosted by Netarts-Oceanside Fire-Rescue and it began at the county boat ramp on Netarts Bay and ended at the fire station. Fire Chief Tim Carpenter recounted how their personal watercraft (PWC) based water rescue team was formed more than 20 years ago. “Since that time, it
has been a stable rescue force,” said Chief Carpenter.

The Netarts-Oceanside water rescue team primarily responds to calls in Netarts Bay and the Pacific Ocean adjacent to Oceanside and Cape Lookout State Park. They have had some remarkable rescues throughout those two decades. They have also had more than a few body recoveries. “We are seeing a huge increase in water sports, but the real issues are with novice boaters, often with undersized boats and undersized motors that go crabbing on outgoing tides,” said Chief Carpenter.
Our local Oregon State Police (OSP) Fish and Wildlife Division partners were represented by Sgt. Greg Plummer, and Troopers Chuck Reeder and Aaron Miller. Trooper Chuck Reeder is a lifelong resident of Tillamook County and spent nearly two decades as a TCSO Marine Deputy before joining
OSP. Trooper Reeder has been decorated with several life-saving awards, and has been involved in hundreds of rescue operations. Yet, he was still emotional when discussing his frustration over the fact that people continue to die in Netarts Bay – often right in front of first responders.
Trooper Reeder gave the group a quick debrief of the recent double fatal drowning in Netarts. On that day, despite the quick response of first responders to the beach, they could only watch as two people clung to the side of a 12 foot boat as it was being rapidly sucked out toward the ocean. “It was heart-wrenching.”
Reeder and other responders began thinking of other possible ways to help before the arrival of rescue PWC’s, but without a watercraft, they would have certainly perished as well. “All we had were throw bags, so I was trying to think if I had enough rope to tie around me and then try swimming out to them. Aaron (Miller) was putting on a drysuit and also trying to think of a way to reach them. But we couldn’t do anything,” recalled Reeder. “There weren’t huge waves (at the mouth), but it was tumultuous and erratic.” 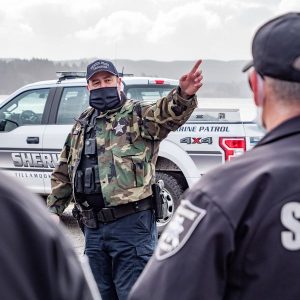 Responders and public bystanders witnessed the small capsized boat being consumed by the waves at the mouth, and watched in horror as it – and the two people holding onto the sides – quickly disappeared under water.
“In all of the water rescues I have been a part of out here, and there have been a lot, there is always something floating near where the boat capsizes: a gas tank, a life jacket, a pop can…something.
This time, there was nothing. They were just gone,” said Reeder.
The two victims were recovered by the Netarts-Oceanside FIre-Rescue’s water rescue team, but they could not be resuscitated. Neither of the two drowning victims were wearing personal floatation devices (PFD’s), commonly known as life jackets, and no PFD’s were recovered at the scene. The 12 foot boat was recovered recently near Astoria’s south jetty, more than fifty miles away.
The group of stakeholders at the meeting also included representatives from the Oregon State Marine Board (OSMB), Tillamook County Parks, the United States Coast Guard (USCG) and board members of Netarts-Oceanside Fire-Rescue. Randy Henry, Boating Safety Manager from the OSMB,
lead the discussion as the group identified the contributing causes of these emergencies in Netarts Bay.
Increased use, inexperienced boaters, inappropriate vessels for conditions, unfamiliarity with the severity and timing of the tides and the lack of PFD’s were identified as some of the major contributing factors.
The group also discussed ideas to help reduce the water rescue emergencies on Netarts Bay. This might include improved boater education, signage, social media messaging, reader boards with dangers and tidal conditions, free-loaner PFD kiosks and increased investment in water rescue responses from the combined agencies. Future meetings are planned and ongoing discussions will continue.
“These type of discussions with our partner agencies, where we can collaborate on solutions, are key to solving these issues,” said Sheriff Joshua Brown.