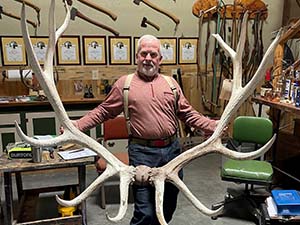 LA GRANDE, Ore.—The antlers of a Union County bull elk have been officially scored at 406 6/8 which would make it the second place record for a typical Rocky Mountain elk in Oregon.

The bull’s skull and antlers were found by a cone collecting crew on private timberland in the Catherine Creek Unit during the summer and turned in to ODFW.

Mark Penninger, a certified scorer for Northwest Big Game Records Inc, officially scored the elk in early November after waiting the required 60 days. (An animal must undergo a minimum of 60-day drying period before it is officially scored as skulls and antlers will shrink some after their first “green” score immediately after harvest or pick-up.)

“Bull elk of this caliber are incredibly rare in Oregon but it’s great to see that they are still around,” said Penninger, who described the antlers as “jawdropping.”

“This bull is testament that age, good genetics, and high-quality habitat can produce truly world class elk,” he said.

ODFW does not track trophy records but will be submitting the score to Northwest Big Game Records for official placement. Northwest Big Game Records is one organization that keeps records of game animals including both those that are harvested by hunters and those that are found dead. (In Oregon, due to poaching concerns, it is unlawful to possess or transport found dead game mammals or their parts, except for naturally shed antlers or certain parts when salvaging roadkill.)

The last time an elk with typical antlers scoring higher than 400 was found or harvested was 1984 by Randy Ryerse in Crook County, an elk now bumped to the #4 record with a 400 0/8 score.

Until now, the second largest was a bull taken in Grant County by Jim Sproul with antlers measuring 401 1/8. This bull was displayed in the John Day Elks Lodge until it was lost in a fire when the building burned down, according to Penninger. The bull had the longest main beam of any bull anywhere for a long time, he says.

With this Catherine Creek elk, the top four Rocky Mountain elk will all score higher than 400. After that, antler scores drop into the high 300s.

“In fairly rare cases, an animal meets minimum qualifications for both typical and non-typical categories for the species,” said Penninger. “Typical scores subtract non-typical points.” (Learn more about how elk and other big game are scored by listening to this week’s Beaver State Podcast with Penninger.)

According to David Morris of Northwest Big Game, this record setting bull is often mixed up with another one of the same name (both are named after William H Taft who served as U.S. President 1909-1913). But there were actually two different Rocky Mountain elk that came to be called “Taft” in northeast Oregon in the early 20th century.

While historic records indicate elk were abundant in the Wallowa Mountains and Blue Mountain Plateau, market hunting had reduced numbers to a few small herds by the late 1800s/early 20th century, so elk were transplanted into the state to restore the population. (The Oregon Legislature provided protection for elk in 1899 by making it illegal to sell meat from wild animals and by closing elk season from 1909 through 1932, and the Rocky Mountain elk population has since rebounded to more than 70,000 today.)

The first “Taft” was one of the original elk relocated from the Jackson Hole area to Oregon in the early 20th century. In 1912, 15 elk from Wyoming were released at Billy Meadows in Wallowa County followed by another 15 in 1913, and one of those was the first “Taft.”

The first Taft’s shed antlers are still displayed at the Enterprise Elks Lodge. Sheds from the second Taft (the 1930 record-setting bull) were displayed at La Grande’s Elks Lodge and are now at the Baker City Elks Lodge, according to Morris. Their antlers look different.

Morris spent several years researching the two Tafts and the story about what he found is in his book (The Record Book for Oregon’s Big Game Animals, 6th Edition). Based on his research, Morris says the second Taft was likely one of a handful of elk born in one of the enclosures at Billy Meadows where the transplanted elk lived for several years; the fences were taken down in 1922.

ODFW hopes to eventually display the Catherine Creek bull’s record antlers in one of our offices and thanks taxidermist Brody Turner for working with us to get them ready for display.