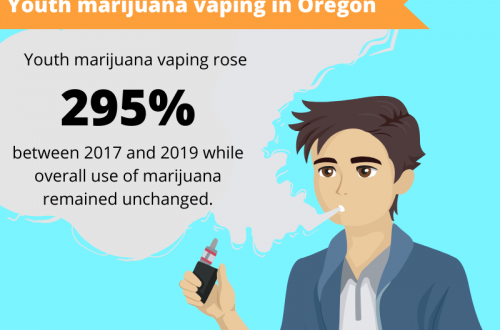 While overall use of marijuana among Oregon youth has remained flat, the primary way they’re using the substance — vaping — has dramatically increased, an Oregon Health Authority analysis has found.
This finding adds to evidence that vaping is subjecting many more youth to addiction. New data show one in four Oregon 11th-graders reporting vaping a nicotine product, with youth use of e-cigarettes like Juul increasing nearly 80 percent between 2017 and 2019. Marijuana use changed dramatically as well, according to the data, with youth shifting from smoking marijuana to vaping. 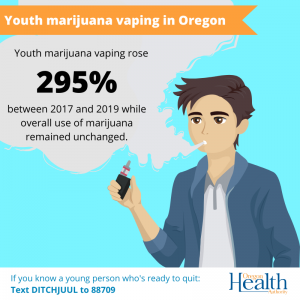 Youth vaping of marijuana increased 295 percent — from 11 percent to 44 percent among 11th-graders using marijuana — between 2017 and 2019, even as 11th-grade overall marijuana use stayed constant at 20 percent. The data come from Oregon Healthy Teens (OHT), a survey of middle- and high-school students that OHA administers every two years.
“This is alarming,” said Dean Sidelinger, MD, MSEd, health officer and state epidemiologist, OHA Public Health Division. “It confirms what we’ve long known: Vaping is putting a new generation at risk for addiction. These products can get young people started on using nicotine and marijuana, and it is easy to get hooked.” 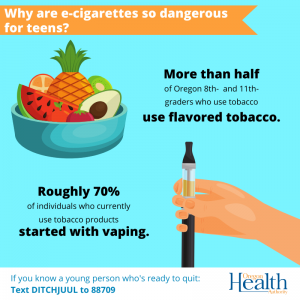 OHT and the Behavioral Risk Factor Surveillance System (BRFSS), a survey the Centers for Disease Control and Prevention annually administers in partnership with states, both found that nicotine vaping products are most popular among children and young adults: 23 percent of 11th-grade students and 13 percent of young adults, ages 18 to 24, use nicotine e-cigarettes versus just 3 percent of adults age 25 and older.
About half of Oregon high school students who currently use e-cigarettes report they never smoked conventional cigarettes — not even one time.
In Oregon, youth vaping overlaps with use of conventional tobacco and flavored tobacco products, the OHT analysis showed. More than half of Oregon eighth- and 11th-graders who use tobacco use flavored tobacco. Roughly half of all youth who currently use conventional tobacco products started with vape products. Nearly two in five Oregon 11th-grade vape users also currently smoke conventional cigarettes.
A February 2019 study in the journal JAMA Network Open, one of the first studies to track youth e-cigarette users over time, found that young people who vape e-cigarettes are nearly three times as likely to start smoking cigarettes as peers who don’t vape.
A fact sheet on OHA’s analysis of youth vaping data is available on the agency’s tobacco prevention website.
OHA continues to participate in the investigation of a nationwide outbreak of respiratory injuries associated with use of vaping devices. It is working with local public health and health care partners to track related illnesses in Oregon, which now has 12 cases, including two deaths. 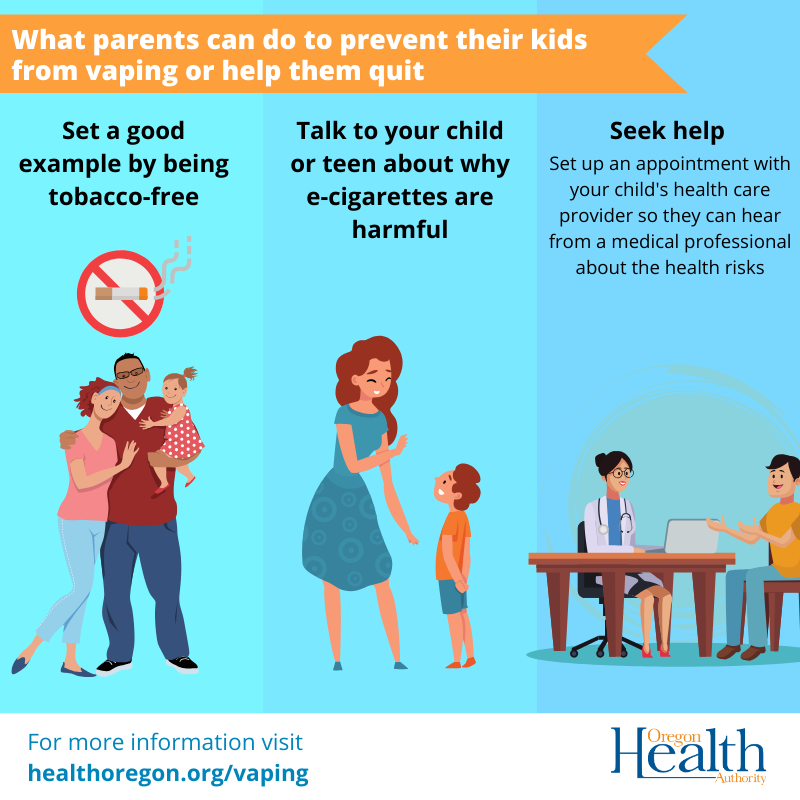 OHA advises the public not to use e-cigarettes or vape products. Those who want to quit are urged to take advantage of free cessation resources, including:
800-QUIT-NOW (800-784-8669), http://www.quitnow.net/Oregon.
Español: 855-DÉJELO-YA (855-335-35692), www.quitnow.net/oregonsp.
Youth quit resource for vaping – http://www.thisisquitting.com/
Truth Initiative: Text DITCHJUUL to 88709 or visit https://truthinitiative.org/research-resources/quitting-smoking-vaping/quitting-e-cigarettes.
For help quitting marijuana or other substance use: 800-662-HELP.
Oregon’s Alcohol and Drug Helpline: 800-923-4357 or text RecoveryNow to 839863.