Beeswax, used as ballast, becomes “good as gold” when washed ashore on the coast

April 2, 2022. Manzanita Oregon. The north coast of Oregon is often referred to as the graveyard of the Pacific, and with good reason. Many ships in past centuries were often unable to withstand its rugged, rocky shores and strong waves and storms. But what washed ashore from the shipwrecks was often found useful for those living on the land.

The newest exhibit at the Nehalem Valley Historical Society graphically portrays the historical routes from 1565 to 1815 of a typical Spanish galleon ship, a route that sailed from Manila in the Philippines to Mexico, via the Pacific Coast along what is now Oregon and California. The coast brought strong winds, storms and rocky shores, often resulting in shipwrecks. Beeswax, often used for ballast, would land on the beach, and became valuable to locals, used for boat and canoe sealant, skin salve and candles. 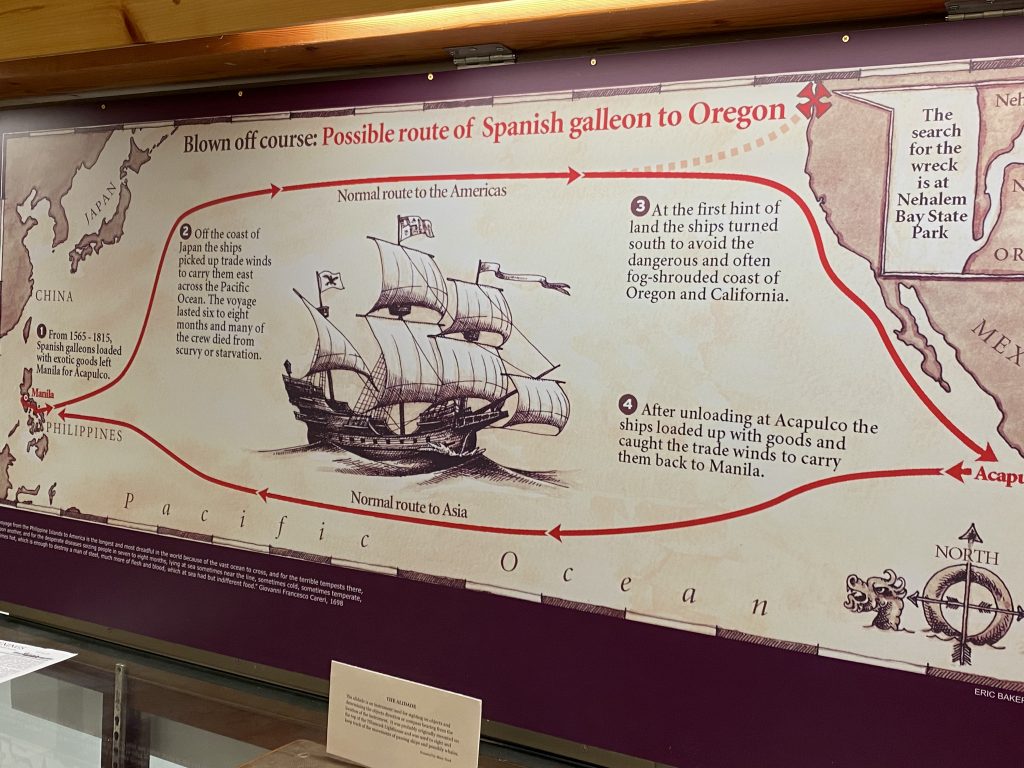 The new exhibit tracks the historic shipping route, describes the types of ships and exotic goods carried, and “mining” and uses of lost cargo.

Nehalem Valley Historical Society is a 501c3 nonprofit organization dedicated to preserving history and educating the public about the Nehalem Valley. It is located at 225 Laneda Avenue in Manzanita. For more information go to nehalemvalleyhistory.org. If you are interested in becoming involved as a member, volunteer or board member, please send an email to info@nehalemvalleyhistory.org.

The new exhibit tracks the historic shipping route, describes the types of ships and exotic goods carried, and “mining” and uses of lost cargo.

The historical society is open Saturdays from 1pm to 4pm, and is located at 225 Laneda Avenue in Manzanita.