In a previous newsletter, I reported that about 4000 bills were introduced this session. I wanted to tell you this week about one of them. While it won’t make headlines, it will insure small but significant changes. Moreover, it is an excellent example of how one Oregonian can make a difference.

Several months ago, an Oregon student here on the coast experienced something no child should have to endure. They were confronted in school with symbols of racial hate. But remarkably, they responded with constructive courage. They went to the school board, then the Department of Education, and ultimately the legislature. HB 2697 prohibits specific symbols from being displayed in our schools except as part of an educational curriculum.

Some of us experienced and many of us observed bias, bigotry, and bullying in school. HB 2697, which I co-sponsored, makes our schools a little safer and a lot more welcoming. Please take a moment and watch my floor comments as the measure passed unanimously. 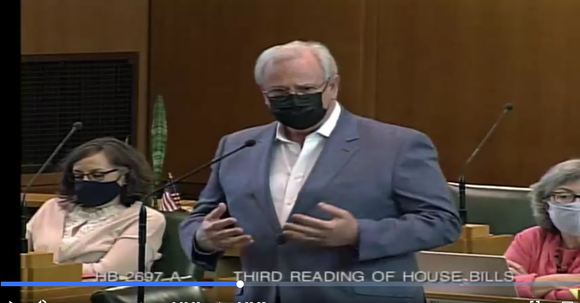 Commenting on HB 2697 and speaking to “Student A”.

The American Rescue Plan Act (ARPA) passed by Congress and signed into law by the President last month will be sending money to Oregonians and to Oregon in the next few weeks. 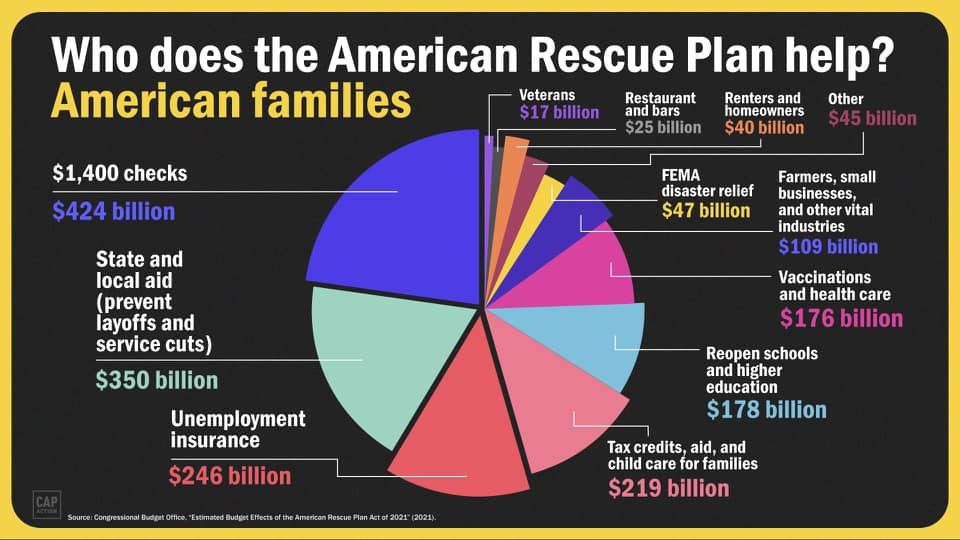 This is a busy graphic, but I think it’s important to point out that two huge pieces of the pie, blue and pink, are direct payments to Oregonians.

Another big pie piece, the green wedge, goes to state and local governments to prevent layoffs and service cuts. Oregon stands to get $4.3 billion (with a “b”), which will be divided among state, county, and city governments. Cities, counties, and schools will receive direct payments. State Government will receive $2.6 billion. Of that;

Two weeks ago, I wrote that I had been asked to provide suggestions on spending these one-time dollars to help our district. I narrowed nearly fifty proposals to just 12 with a total price tag of about $30 million. Half of that was for critical support for the failing Newport dams. Each legislator submitted a similar list.

I will admit that when I first received news of all the suggestions from 90 legislators, it took my breath away – over a thousand suggestions with a price tag of over $30 billion! That’s $30 billion in asks for less than $1 billion in funds!

Many of my colleagues suggested direct, one-time support for people: frontline worker stimulus, child care, stable housing, worker relief, renter and landlord relief, or support for specified small business sectors. These are compelling suggestions but are big-ticket asks where a single proposal sometimes exceeded all of the $780 million available.

I think we have to acknowledge that much of this kind of spending is already occurring. Oregonians have received stimulus payments, increases in unemployment benefits, child care, rent and housing relief. Similarly, we have sent PPE money to small business, grants to entertainment venues, and dollars for unpaid commercial rent. All are good and worthy investments. But we have done them. If we are serious about recovering better, I submit we need to do something new.

Looking over the list, over and over I see shovel-ready local projects in the $2-10 million range. I’m also reminded that 30 capital construction projects across Oregon were delayed last year when lottery bond sales were cancelled and the promised checks failed to arrive. They still need and deserve our help.

Across Oregon we have water systems that are failing, wastewater plants that are rusting, port docks rotting, and dams at risk of catastrophic collapse. Too often, the multi-million-dollar cost of replacement exceeds the ability of small communities to finance. But without those core systems, those communities will fade.

At the same time, too much of Oregon does not have reliable, affordable, accessible broadband. Education suffers, small business suffers, and progress suffers. And finally, there are proposals for projects that improve the economy, livability, and resiliency of our communities. Investing now in job creation and quality of life will pay dividends for years to come.

We need housing but that housing requires available and affordable water and sewer. We need to help workers but we help them best with better jobs. Similarly, broadening broadband, like a rising tide, lifts all ships.

To that end, I have argued that at least half of the ARPA dollars be invested in shovel-ready infrastructure initiatives and improvements. I estimate that would benefit roughly 100 projects across the state. If more funds become available from Washington D.C. later, we’ll have started already on the most pressing needs and be able to move to more expensive concerns.

Ninety years ago, Franklin Roosevelt and the New Deal brought us the WPA, CCC, and the PWA. The infrastructure he created ended the Great Depression. It transformed America. But that infrastructure is now worn out and in need of help. We have the means to transform Oregon once again. Let’s do just that!

I hope this newsletter has de-mystified the American Rescue Plan a bit and the choices that cities, counties and the state will be making to best utilize this funding. I firmly believe that this federal rescue plan can help us rebuild Oregon to be healthier, safer and more equitable than ever before.

Please remember that the budget-writing Ways and Means Committee is holding public hearings asking your opinion on spending priorities. Five “zoom” meetings are scheduled for different parts of the state and our turn is Saturday, April 24, from 1-3 pm.

You can appear live to testify by phone or video or submit written testimony. Meeting details are posted on the Oregon Legislative Information Site.

The first two remote hearings attracted over 100 people each. With about two-and-a-half hours available, and time limited to two minutes per person, we still only heard from about half those with ideas to share. If you want to testify and I can help, please let me know. And remember that whether you speak or not, written testimony will allow you more space to focus and detail your concerns and priorities.

Federal and state tax filings are due May 17th. Normally, of course, they would’ve been due April 15th, but due to the pandemic, the IRS and the Oregon Department of Revenue have both extended the filing deadline by a month.

Even with the extra time, it’s advisable to file your taxes promptly. Waiting until the deadline can unnecessarily complicate the filing process for you if there’s an error in your filing or if you realize that you don’t have all of the documents you’ll need to file on time.

If you need assistance filing your taxes, there are many resources that can help you. The IRS and the Oregon Department of Revenue offer free filing support, including free tax assistance, although some of the options have income-based eligibility restrictions.

In the best news from Salem in months, an agreement was reached Wednesday evening after a weeks-long standoff that had brought legislative action to a trickle. This fundamentally shifts the dynamics of the 2021 session.

House Democrats have agreed to add another Republican to the committee working to redraw political districts so that it now has equal numbers from both parties. In return, House Republicans agreed to stop using parliamentary rules to slow the legislative process.

For weeks, partisan friction and obstructionism has been delaying bills to help lower health care costs, address the housing crisis, combat climate change, and make progress toward a more truly equitable future. It’s important to note that 90% of bills coming to the floor had bipartisan, unanimous support coming out of their committees. I’m pleased with this compromise. Some of you have heard me say that, after 30 years of marriage, I’ve learned that compromising isn’t losing…

And to be clear, I’m pleased with a redistricting committee that has equal numbers of Republicans and Democrats. If the legislature cannot come to an equitable agreement, the redistricting task falls to Secretary of State Shemia Fagan.

We are still scheduled for long hours on the floor this week as we work to get caught up. But we are now moving ahead. No matter what, I’ll continue to fight each day for your priorities and to improve the lives of every Oregonian.