Up and down the Coast, we are seeing help wanted signs. Businesses can’t find workers. And the result is that some fast-food outlets are closed, service levels are strained in restaurants, shops are limiting hours, you can’t find a contractor, products become scarce or more expensive, and waits are longer everywhere from your doctor’s office to the pharmacy to getting your car serviced. All of us are being affected!

Finding employees in the summer has always been a problem here. But the traditional challenges have now been exacerbated by the pandemic and our response.

Our most obvious problem is housing. Simply put, many people who want to work here can’t find a place to live here. A third of Newport’s workers commute from out-of-town. Our vacancy rate is under one-half of one percent. And a modest studio apartment is well over $1,000 per month which is more than half what you can earn at minimum wage.

In some of our communities, only a third of the houses are available for people to live in with the majority owned as second homes or being used for short term vacation rentals. Increased regulation from the state has encouraged some smaller landlords to consider alternatives to providing workforce housing.

A second, more subtle challenge is upward mobility. The average minimum wage earner here is a single parent in their late 20s. That means after working for ten years, they are still at the bottom of the economy. Entry-level jobs become careers as there are too few opportunities to find better paying work. And when that happens, workers looking for better jobs move somewhere else.

And now to make matters worse, we are finding a new problem which I describe as benefit disruption.

A new report from the Oregon Office of Economic Analysis says that during recessions and the early stages of recoveries, hiring employers typically have more workers to choose from when it comes to filling job openings. Unemployed workers greatly outnumber job vacancies. But the pandemic recession is different. In fact, a majority of Oregon employers (54%) are now citing difficulty hiring workers.

This recovery looks different because several simultaneous factors are constraining the supply of labor for job openings. These include a reduced or altered labor force due to COVID-related issues, transfer payments and benefits supporting households more during the pandemic, and rapid hiring during the re-opening period creating more intense competition for qualified workers.

Federal Pandemic Unemployment Compensation (FPUC) adds $300 onto weekly unemployment insurance benefits through September 4, 2021. In the first quarter of 2021, the weekly regular unemployment (UI) benefit has averaged $370 per week. With the additional $300 FPUC payment, that adds up to an average payment of $670 per week — roughly the same as earning $16.75 per hour for someone working full time. Non-working parents will also save the cost of childcare. Increasingly I’m hearing that increased benefits discourage workers from returning to work. 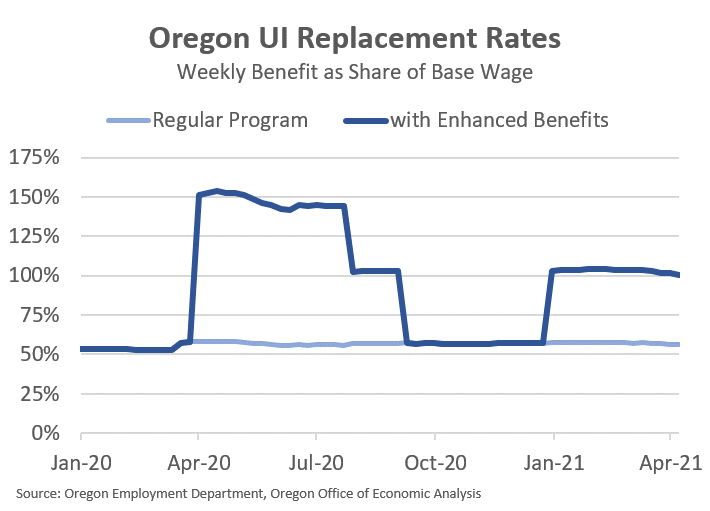 To offer some perspective, earning $670 per week, working year round would total $34,840 in gross earnings. By comparison, the median earnings for full-time workers in Oregon in 2019 was $50,712. With “Now Hiring” signs in many business windows and stronger wage offerings as employers compete for available workers, the report says it’s unlikely that benefits alone are keeping a vast number of workers on the sidelines.

But that is a statewide assessment and not all parts of Oregon are the same. In our part of Oregon, most wages are below $670 per week. More than 60% of Oregon’s lost jobs in the spring of 2020 were in bars, hotels, nail salons, restaurants, and schools. Not surprisingly, coastal counties have consistently reported the highest unemployment in the state. This interesting OPB interview provides some special insights to the hospitality economy and what recovery looks like here.

So what does a legislator do in the face of all this?

On the housing front, I’ve consistently worked to allocate funds for affordable housing. I was named a “Housing Champion” for leadership funding affordable housing and homelessness solutions by the Oregon Housing Alliance. I’ve voted against new regulations on small landlords. And I’ve introduced legislation to help small cities and counties get and use the money the state provides.

To help provide better jobs, I’ve worked with our Small Business Development Centers and Community Colleges to create opportunity and educate students for better jobs. I was named a “Small Business Ally” by Mainstreet Alliance. I have worked to broaden our economy supporting our ports, improving our infrastructure, helping build an enhanced ocean studies center, and looking at new initiatives like the “blue economy”.

I am a state legislator and many benefits and payments flowing to Oregon come from the federal government. But I have worked to help our Oregon Employment Division get back on track, clear backlogs, answer the phones, get people to work and help employers.

Recently, large rebounds have been notable in leisure and hospitality, which has been adding more jobs per month than the overall economy did pre-COVID. As these businesses compete to hire scarce workers with similar skills, they may need to increase wages or perks to get workers in the door and on the job. Already we see entry-level jobs offered at $15-$17 per hour.  The question is whether firms will raise prices due to higher wages and other cost increases.

Total personal income in Oregon today is about 15% more than before the pandemic. That’s a remarkable statistic. In our own communities, a third of the residents are retired and continuing to receive income unaffected by the pandemic. Many businesses are doing fine and have more work than they can fulfill. “Gig” and tech workers are thriving. And the summer hospitality economy is not as uncertain as it was a year ago. But the fact remains that there are still uncertainties and associated challenges.

You can be part of the solution by spending locally and supporting our local businesses and working families.

Are we cutting too much? If you’ve followed recent coverage, or if you’ve happened to drive through any of the forests ravaged by the 2020 wildfires, you might know there are growing questions whether ongoing “hazard tree removal” by ODOT, FEMA, the Forest Service and the Power Utilities has gone beyond its intended purpose.

I serve on the House Wildfire Recovery Committee and was also invited to sit-in with the Senate Natural Resources Committee for fact-finding hearings last week that raised eyebrows. The Oregonian’s coverage of it is here, and video of the Senate meeting is here. (The serious drama begins about 53:00 in.) The House Committee meeting is here.  (You can hear Lincoln County specific testimony starting at 1:26:00)

We want trees that are hazardous to be properly and promptly removed. But we also don’t want to overmark and cut trees that may recover. Watching these hearings will leave you with wildly different versions of what’s happening. We need to find out which is closest to the truth. I will continue to do what I can to make that happen.

Is the state holding property that you have lost or an inheritance you unknowingly are owed?

Unclaimed property includes abandoned financial assets such as checking and savings accounts, unpaid wages, securities, life insurance payouts, uncashed checks, and the safe deposit box contents that are without activity for a certain period of time.

The organization holding unclaimed property is obligated to make an effort to contact the owner. If these attempts don’t work, the asset is reported to the state.

Unclaimed property laws began in the United States as a consumer protection program and they have evolved to protect not only the owners, but their heirs and estates as well. Once the state has custody of the asset, outreach efforts are made to locate the owners. Those efforts may include mailings, press releases, advertisements and the use of social media. The state will maintain custody of the asset until the rightful owner or heirs come forward.

Oregon is holding millions of dollars in unclaimed assets. The Unclaimed Property Program keeps those funds safe for their rightful owners to claim.

To quickly determine if funds are owed you, go to the Search for Unclaimed Property webpage. For more information on the program, you can click here. To search for military medals and insignia reported as found and unclaimed go to https://www.oregon.gov/dsl/Money/Pages/MilitaryMedals.aspx.

I recently had the honor of recognizing two remarkable Oregonians on the House floor.

Michael Gibbons was one of Oregon’s premier artists. He was also a dear friend. When Governor Brown was first elected, she invited members of the legislature to the Governor’s Mansion for a welcoming reception. As I was standing with her in the dining room I said, “Governor, this painting in your dining room was made by one of my constituents,” and her face lit up. She said, “Oh Representative Gomberg, let me take you to the second floor landing and show you my other Michael Gibbons!”

Oregon Senator Mark Hatfield said, referring to Mr. Gibbons, “this man has painted land that we all know and love, giving it back to us in a form we can understand.” I encourage you to google him for a rare insight to Oregon. A copy of the resolution is online here. And you can see my floor speech here.

In May of 1975 OSP Lieutenant Harold Berg was lost in a sneaker wave as he volunteered in a search and rescue operation for two missing boy scouts. OSP Superintendent Holly Holcomb wrote a letter to the family saying, “I have known of no finer person or a more respected police officer within our department. His children can be very proud of their father, for even in his last act, he was unselfishly attempting to assist others.” Not long after, the OSP established the Harold R. Berg Lifesaving Award in his memory.

A copy of the resolution is online here. And you can see my floor speech here.

Our district is filled with remarkable, kind, and contributing people. Thank you for all you do each day to help, support, and encourage each other.