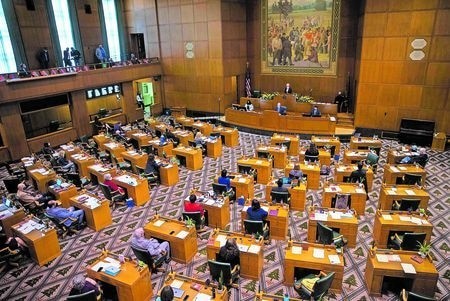 With temperatures spiking to over 110 in Salem Saturday, the 2021 Legislature concluded its business and gaveled adjournment.

The Oregon State Capitol at sunset.

It was a difficult, roller-coaster of a session, limited by the pandemic and confronted with the challenges of addressing both economic recovery and natural disasters. But from the beginning, it was also a session where it was clear there would be new federal dollars to invest in one-time projects across the state, and I was determined our part of the state would benefit. Using my legislative seniority, my knowledge of needs across the district, and my strategic role as vice-chair of Ways and Means, I worked to fund our water and sewer systems, ports, and community centers.

A colleague from the Valley once recounted to me that there was more highway work being done in my district than his. “That’s because more of your constituents drive on my roads than my constituents drive on yours,” I replied. We both laughed. But the truth is, and this past weekend heat wave is a clear example, that people from across Oregon come here and when they do, they drink our water and flush our toilets. We need infrastructure here that far exceeds our year-round population or the ability of small communities to pay for.

The final bills of the session allocated funds from lottery bonds and Oregon’s $2.6 billion share of the latest round of stimulus money from Washington D.C. Because it is traditionally packed with local project funding, this measure is somewhat euphemistically called the “Christmas Tree Bill.”

In the most simple terms, let me say that this year our district won big! Very BIG!

Throughout the coast and coast range, we are suffering the aging of critical water and sewer systems, public buildings, and ports. When the Capital Construction subcommittee organized public hearings for proposals in May, I organized a dozen advocates and community leaders to testify and worked with them on strategy. Witnesses were limited to two minutes during the two hour hearing. That means one-in-five of the presenters was from our district. Watch the hearing and you will see the presiding chair smile as person-after-person reported they were “working with Rep. Gomberg on this proposal.”

While spending commitments across the state have increased, it is clear our district did particularly well. This is a measure that will save lives, create jobs, and improve livability. We succeeded because we were well organized and made the need clear.

So what projects and investments are we talking about? Let’s take a look at the list:

The Port of Toledo Sanitary Sewer Extension project will connect the Port to City sewer services. The system requires 4,700 feet of main line, 3 pump stations, 3 solid tanks, and will cross the railroad twice, cross the county road, and a bridge.

Greater Toledo Pool Recreation District (GTPRD): $3 million. The original swimming pool in Toledo was built in the 1940s, and the building covering it in the 1960s. Extensive renovations are necessary. To prevent closure, citizens in Toledo and rural East Lincoln County created a special district and approved a property tax for permanent operation and maintenance. The pool serves community members of all ages and recorded over 13,000 annual visits prior to COVID 19.

Waldport Water Tank Project, City of Waldport: $2.2 million. Waldport must replace their failing water tank and make rehabilitation and seismic upgrades of tank infrastructure to safeguard the town’s water supply and ensure adequate water for fire season. This includes a water storage tank seismic retrofit and recoating, and construction of a new 300,000 gallon bolted steel tank as identified under the deficiencies in the Waldport Water Master Plan (2020).

Restoration of Pilings and Docks, City of Depoe Bay: $2.9 million. The docks at the World’s Smallest Harbor are failing and the city has no tax base to replace them. Without support, the facilities may close, costing jobs in the fishing and tourism fleets and a serious setback for coastal prestige.

This project includes replacement of piles and floats in the harbor, including materials, mobilization, equipment, labor, permitting assistance and required insurance.

A new fire hall will provide an emergency response center to support Highway 20 and also serve as a distribution and communication center for potential major emergencies including wildfires or earthquakes.

A Place for the People, Siletz Tribal Arts & Heritage Society: $750 thousand. In 1954, the federal government passed the Western Oregon Termination Act declaring all 921 enrolled members of the Confederated Tribes of Siletz Indians terminated as a sovereign tribe. Twenty-one years later, federal recognition was restored, but not before a generation of cultural transmission was lost.

The Siletz Tribal Arts and Heritage Society (STAHS) has launched a $2.5 million capital campaign to build Ghii Dee-Ne Dvn – place for their people to remember, to heal, to celebrate, to teach and to learn for generations to come. This will be a physical place to preserve the past, practice cultural heritage, and carry on Siletz traditions.

STAHS sought $750,000 that will be matched 3:1 by the Confederated Tribes of Siletz Indians for a total of $2,250,000. They hope to break ground on this project in the spring of 2022. This facility is expected to generate some 290 jobs, and contribute significantly towards the restoration of the cultures of the Siletz Tribes and the healing of the Siletz people.

Big Creek Dams Remediation, City of Newport: $14 million. Funding for this project was approved in 2019 but later cut due to loss of lottery revenue related to COVID-19. Newport resubmitted the funding application for necessary remediation of the Big Creek Dams, and at my suggestion, increased that request from $4M to $14 M.

The dams supply the City’s main source of drinking water, but it was recently discovered that they could spontaneously fail during an earthquake of 3.0 magnitude or higher due to seepage issues and the instability of their earthen foundations. Failure of the dams would threaten the health and safety of the City’s residents, destroy sections of Highway 101, and have devastating, long-term economic effects. Due to the risk posed by potential failure, both dams have recently been considered “unsatisfactory,” and the upper dam will soon be reclassified as “unsafe.”

Support from the State of Oregon is necessary and timely to help advance the design for successful remediation of the dams. Overall the project is expected to cost $80 million.

Capital Improvements, Oregon Coast Aquarium: $5.1 million. More than a tourist destination, the Aquarium is a vital STEM education resource, a wildlife rehabilitation center, and a key driver in Oregon’s $12 billion tourism industry. Prior to COVID-19, the Aquarium had raised nearly $14M in conditional commitments toward an $18M capital campaign to enhance education programs and make capital improvements in three phases:

The Aquarium has raised enough funds to resume and complete Phase I projects in 2021, and again requested a $5M State appropriation for Phase II.

D River Welcome Center, Lincoln City: $2.547 million. D River Park is the most popular beach wayside in the state. It is also the first place that the 20 million people who drive through Lincoln City annually get a look at the ocean. Over one million visitors to pull in each year to watch the surf or enjoy the beach.

Lincoln City is finalizing the transfer of the Wayside from the State to the City. The plan is to transform the Park with a state-of-the-art welcome center, upgraded restrooms, landscaping and improved beach access. With the planned upgrades, D-River Wayside will become the most valuable tourism asset in Lincoln City.

Lincoln City Cultural Center: $1.8 million. The nonprofit Lincoln City Cultural Center has spent 13 years and $1.5 million to turn the historic Delake School (circa 1929) into a well-equipped center for arts, culture and community programs, hosting 350 events with an attendance of 45,000 in 2019. From the outside, however, the center still looks like an abandoned school surrounded by broken sidewalks, old fences, poor lighting and potholes.

The Lincoln City Cultural Plaza would transform these grounds with accessible pathways, gathering places, well-designed and expanded parking, public art and vendor amenities, and an artistic welcome mat to the 8.8 million cars that pass by on Hwy. 101 each year.

The State approved a $1.5M appropriation in the 2019-21 Budget. However, the appropriation was rescinded when Lottery Bond sales were cancelled due to COVID.

This is an important opportunity to better prepare students for local jobs. The CTE project will focus on economic and community revitalization that will benefit a remote and rural region of the West Willamette Valley.

This project will replace and repair sewer, water, and stormwater systems destroyed or compromised during the Labor Day wildfires in Otis.

The District lost approximately 100 of its 300 residential users during the Echo Mountain Fire. The District’s 50,000 gallon redwood reservoir was also damaged during the fire. The proposed project is to construct two storage tanks with a combined volume of 500,000 gallons to replace the redwood tank. The storage tanks will be located to provide pressures and fire-fighting capabilities throughout the District and will be constructed to appropriate seismic standards. 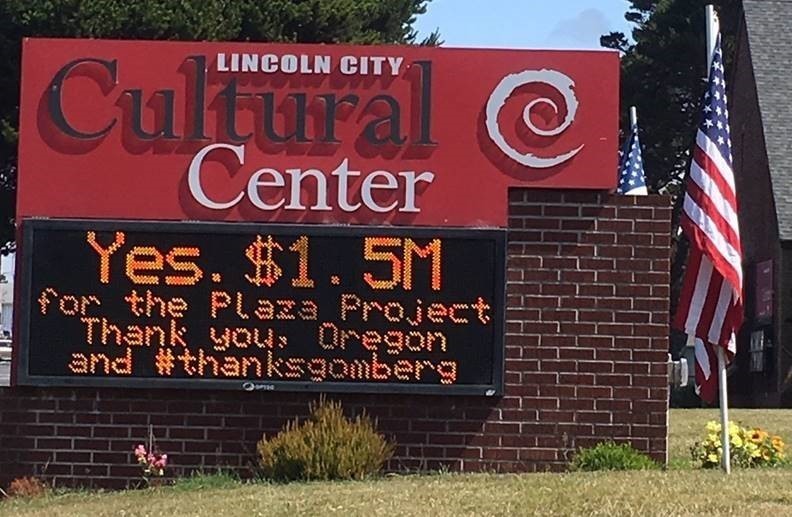 The scope and effect of these investments is breathtaking. I have never seen this kind of commitment to infrastructure and I doubt we will again soon.

Senator Anderson and I worked together on initial funding for Waldport, Depoe Bay and the Cultural Center in Lincoln City. I then negotiated with the Capital Construction committee to add more dollars and complete the funding. Senator Betsy Johnson was a key partner supporting coastal projects. And I partnered with Representative Suzanne Weber on the Tillamook water line which spans both our districts.

I’ve been working to fund many of these programs since the first day of session and it was good to see them pass on the very last day.

As I said earlier, this has been a difficult session. But for our district, it has been a successful one. I wanted to begin my session review with this report on funding allocations. Next week I’ll report on policy measures I sponsored that particularly affect us.

It has been an honor to serve for another session in the House of Representatives. I am humbled by the input I have received from our community this session in the pursuit of a better Oregon. Thank you for being engaged in the process and showing me what matters most to you and how I can best serve you.

Stay cool – with both the temperature and all the heat-wave-refugees visiting us this week. And thanks as always for reading.