June brings us closer to the end of the legislative session. The constitution requires we complete the budget and all pending business by mid-night, June 27. Bills that have not passed both chambers when we adjourn will die.

Back in January, nearly 4,000 measures were introduced. I expect when we finish, fewer than 600 will become law. That is not an unusual number. All of those proposals were a good idea to someone. But that doesn’t mean most of them are a good idea for Oregon. Fewer than a third even received a public hearing.

I also want to tell you that about 80% of the bills we have passed had unanimous support. Roughly 90% had bi-partisan support which is to say that members of both parties voted for them. Less than 10% of the time did a decision break down along partisan lines. That’s a bit of news you seldom hear.

About 150 of the bills we are hearing concern the state budget.

As one of the vice-chairs of the full Ways and Means Committee, and as co-chair of the Ways and Means Sub-Committee on Transportation and Economic Development, this is the time in the session when our work really ramps up. We have been crafting budgets for months, and we are now finalizing decisions and presenting them for votes in committees and on the floor. Agencies that my committee is responsible for include the Department of Transportation (ODOT), Employment Division, Business Oregon (OBDD), the Bureau of Labor and Industries (BOLI), Veterans Affairs, Real Estate Agency, Housing and Community Services, Consumer and Business Services (DCBS), and the and the Liquor and Cannabis Commission (OLCC).

We’re also working on investments in local infrastructure. This includes disbursal of funds received from the Federal government as part of the America Rescue Plan Act (ARPA) and also dollars from lottery bond sales. Two years ago, we received approval for the Newport Dams, Lincoln City Cultural Center, and Oregon Coast Aquarium. But when lottery ticket sales declined, the bond sale was cancelled for the first time in our lottery’s history. That was a disappointing setback. I’m determined to see those projects funded again along with a myriad of regional water, sewer, port, school building, broadband, and safety programs.

Nothing is certain until it is final. Capital Construction projects will be listed on the very last bill we approve before adjournment.

On Thursday I presided over the afternoon House session as we passed nearly 20 bills.

On Thursday, I voted to pass Senate Bill 5514 A, which sets the two-year budget for our state schools at a record $9.3 billion. This is the largest K-12 budget in Oregon history. Those funds will be combined with almost $4.6 billion in property taxes and other local revenues for distribution through the school revenue formula.

This record level of investment will give students across the state the tools and resources they need to succeed.

The historic $9.3 billion K-12 budget, in addition to several other sources of funding including an influx of federal funding from the CARES Act and the American Rescue Plan Act, will help ensure we’re meeting the needs of our children.

The Oregon Constitution requires that our budget be balanced. We cannot spend more than we bring in. That requires careful balancing of needs and priorities. This school budget will stabilize education and also ensure we can fund health care, wildfire response, transportation, small business support, and other urgent concerns as we recover from one of the hardest economic recessions in our lifetimes and a global pandemic.

On the COVID front, we are now on track to fully reopen Oregon on June 21. The Governor gave a COVID update in her press briefing on Friday.  One major theme of the briefing was that Oregon is now experiencing two radically different pandemics: one for the vaccinated (an overall positive story) and one for the unvaccinated (a tale of ongoing risk).

A stark example was presented by a pulmonologist from Bend, where of the 98 COVID deaths they’ve experienced, all but one were unvaccinated. You can watch the briefing here (starts at 33’32”), find the slides here and read the press conference talking points here.

Here are some highlights:

If you are fully vaccinated, you can begin to put the pandemic behind you. You won’t have to quarantine yourself even if you come in contact with someone with COVID. At the bottom of this weekly report, I’ve provided some graphics on our progress.

For the next few weeks, I’ll continue to work long days in Salem.

Over the weekend, I recorded a radio interview that will broadcast on the Yaquina Network Tuesday morning. Saturday Susie and I stopped by the Newport Farmer’s Market, drove down to a business in Waldport, enjoyed Saturday afternoon at Art, Oysters and Brews in Toledo, and finished the day dining with good friends. I took some time Sunday to compose the commencement speech I will deliver for the Tillamook Bay Community College graduation.

It felt good to get out in the sunshine and to see people smiling. I hope your weekend was equally productive.

Thanks as always for reading.

Tillamook County is currently at about 63%, and the state is at about 68% – moving closer to 70%, and fully reopening. 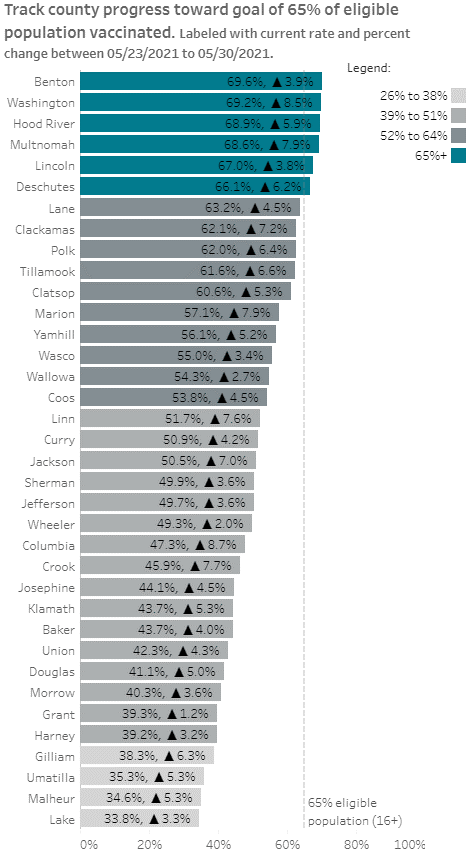 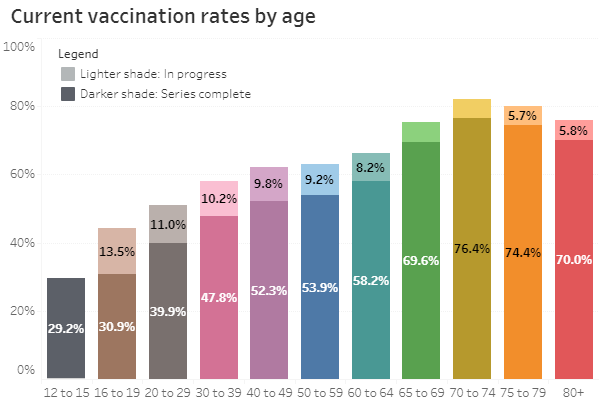