By the Summer of 2020, our district was hurting. COVID had all but shut down the hospitality industry. We were suffering the highest unemployment in the state. And the state agency tasked with helping people was failing them.

Workers and employers pay into a system intended to provide transition benefits when people are out of work. But in the Summer of 2020, those workers filed forms and never heard anything back. They called the agency only to be left on hold for hours and then disconnected. And in too many cases, the promised checks never arrived. Families already living on the financial edge were left to wait months for benefits they had paid for and were entitled to.

Many called my office and with only one staff person, we worked feverously to help. But we all faced a problem I described as a record number of claims, a record number of new rules, and a record number of new agency employees – most of whom were working from home with only remote supervision. The Employment Division (OED) was unprepared and overwhelmed. They suffered an inflexible thirty-year-old computer system. The Director was replaced and a new Director struggled to make changes and get the money moving.

Now, two years later, an audit from the Secretary of State details what went wrong.

The 32-page report reiterates the findings of two prior audits, in 2012 and 2015, that the employment department suffered from frequent turnover in its executive ranks and an obsolete and inflexible computer system that dates to the 1990s. Those failings became acute during the pandemic, blocking aid for tens of thousands of people during the sharpest economic downturn in Oregon history. 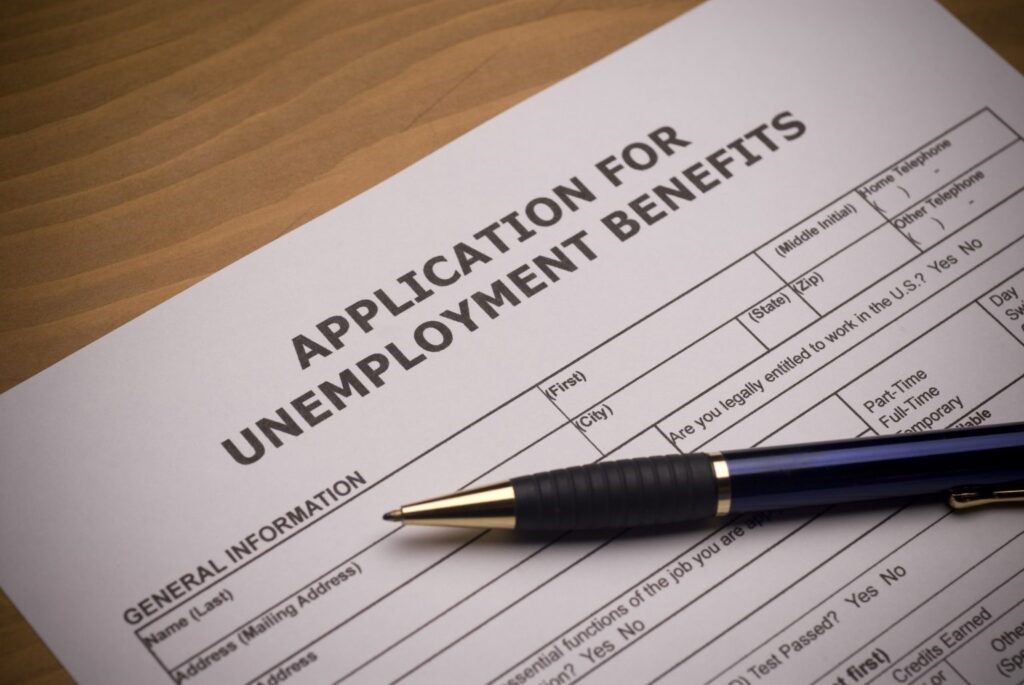 Oregon went from around 4,000 new claims for unemployment benefits a week to more than 62,000 during the first week of April, 2020. New pandemic-related federal programs that increased and expanded unemployment benefits created more work for the already-stressed department.  OED reported receiving more than 20 million phone calls in April 2020 alone, the audit states. Tens of thousands of applicants had to wait weeks and even months for their money, the analysis shows.

Among their suggestions, auditors said that the Employment Department might follow other Oregon agencies and unemployment offices in other states by adding an independent advocate to help people understand their rights, responsibilities, and how to file claims. Without that in-house advocate, across the state, legislative offices like mine filled that role.

Auditors proposed seven recommendations, which the Employment Department agreed to. They include:

David Gerstenfeld, now into his third year as the employment department’s acting director, said he agrees with all the auditors’ findings and that fixes are well underway. “We needed to operate differently. Nothing that was in there was a surprise,” Gerstenfeld said in an interview. The department has plans in place to implement each of the auditors’ recommendations.

Still, the auditors found that in some respects Oregon didn’t perform much worse than other states. And they cite federal data indicating the state lost less to fraud than many of its peers.

The report notes that Oregon paid out far less in fraudulent claims than some other states — roughly $24 million in 2020 or just 0.32% of claims paid that year. Washington, by contrast, paid out hundreds of millions of dollars in fraudulent claims in 2020. Oregon’s success, the audit says, is partly due to fraud prevention practices and learning from the experiences of other states. And, they said, fraudsters targeted states with better computer systems that paid out claims faster.

It is HOT in Oregon. But here at the beach it was a cool and misty 60. Five miles inland, in Otis or Toledo, it was 70. Grand Ronde or Blodgett were in the 80’s. And Salem suffered the 90’s with Portland a blistering 100. That means dangerous heat for many workers and retirees living without air conditioning. And it also means our roadways here are bumper-to-bumper with heat refugees from the Valley.

If you are out driving the district, be cautious and patient. Slow for a few seconds to let traffic in or turn. You will catch up to the flow in mere seconds and feel good for making the kind gesture. And if you need to go inland, please be careful and prepared. High temperatures can often result in exhaustion or dangerous heat stroke. 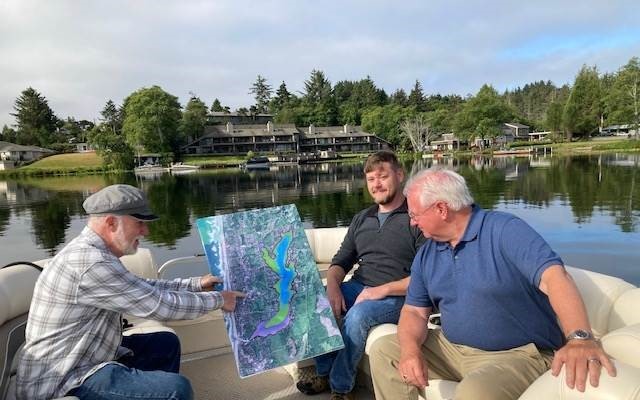 Friday I toured Devils Lake to see firsthand what I already knew. The lake is clogged with invasive weeds.

All of our coastal lakes are facing challenges from algae, weeds, and warming. At our lake in Lincoln City, the problem has become particularly acute and Friday, we had to stop frequently to clear the boat’s propellor. I helped the Lake District secure over $300 thousand dollars last session for weed abatement. But the harvester now in use is expensive and can only work in shallow water. We have concerns about long term use of herbicides. And there have been some bureaucratic challenges to stocking sterile grass carp to the lake.

In the 1980s, about 30,000 carp were introduced to the lake. They ate weeds like crazy. By 1994, the lake was virtually free of submerged aquatic macrophytes and remained so until 2020 when the sterile carp began to die off. The weeds came back.

Mechanical harvesting and chemicals have consequences and high ongoing expenses. I’m working now with the Oregon Department of Fish & Wildlife (ODFW) to answer their carp questions. The Commission will meet next Friday and I’m planning to join them if a solution is not found in the next few days.

Meanwhile Friday, Susie joined lake volunteers who were raking, spreading, and drying weeds that had been pulled from the lake.

Our guide was startled for a moment. “You know their names?? Have you volunteered here?” she asked.

Saturday night, the Aquarium celebrated their 30th anniversary and the first stage of a series of improvements totaling roughly $25 million. In 2019, I worked to bring $5 million of state funding to the effort. But when COVID forced the delay of lottery bond sales, the funding was lost. So we came back in 2021 and secured the money a second time!

Why is this important?

The Aquarium is a key driver in Oregon’s $12 billion tourism industry. Aquarium visitors bring an estimated economic value of $100 million each year to the central coast, boosting employment and financial security in this rural community.

The Aquarium is also one of three wildlife rehabilitation facilities in the Pacific Northwest, and the only one in Oregon, authorized by the U.S. Fish and Wildlife Service, to provide specialized care to endangered marine life.

And finally, let me add that the Aquarium draws and fascinates hundreds of thousands of children each year. Their programs inspire children to learn and discover more about their world outside the classroom, and emphasize the ripple effect of humans on the ecosystem in which they live. Future scientists are born in middle school. 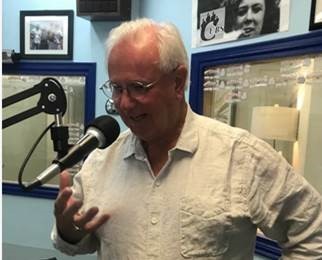 Tuesday I was the guest for an hour-long radio interview on Hotline with Cheri Brubaker.

We enjoyed a wide ranging conversation about wildfire readiness and recovery, investments in local ports, parks, sewer, and water systems, and even talked about the election season. We did not discuss specific campaigns. But Cheri did ask if it was hard to be on the ballot every two years.

Of course it is hard, I said. It requires effort, it costs money, and it takes time away from your family and ongoing legislative  responsibilities. But that’s ok. It is supposed to be hard. Voters deserve that commitment and the opportunity to learn more about the people who ask to represent them in the legislature, on city councils, or on local school boards.

If you are interested, you can listen to the entire program here.

Monday I’ll be doing another radio interview on KTIL. You can listen to the podcast here. Later in the day I will meet with representatives from the Oregon State Police and then travel to Carlton to discuss roadways to the Coast.

Tuesday I’ll be at a Chamber meeting in Pacific City and then enjoy National Night Out, jumping between Siletz, Toledo, and Newport to promote law enforcement-community partnerships and neighborhood camaraderie.  Wednesday I have meetings with the new Oregon Department of Emergency Management and then the Secretary of State Audit Division.

Thursday I talk with Lincoln City Audubon and then the Department of Justice about future bias crime legislation and the issues we have faced here on the Coast. Coastal Caucus will meet that evening.

Friday, Oregon Business and Industry is organizing a bus tour of rural manufacturing that includes stops in Toledo to examine recycling programs at the plant, and then up to Tillamook to see the Creamery. Saturday I’ll enjoy Art, Oysters, and Brew in Toledo. And Sunday I’ll picnic with the Lincoln County Democrats and then drive to the valley for a fundraiser with a group trying to reduce pets kept in un-fenced yards on chains called Fences for Fido.

Sorry for the long report but as you already know, there is a lot going on. Make the most of this wonderful summer!