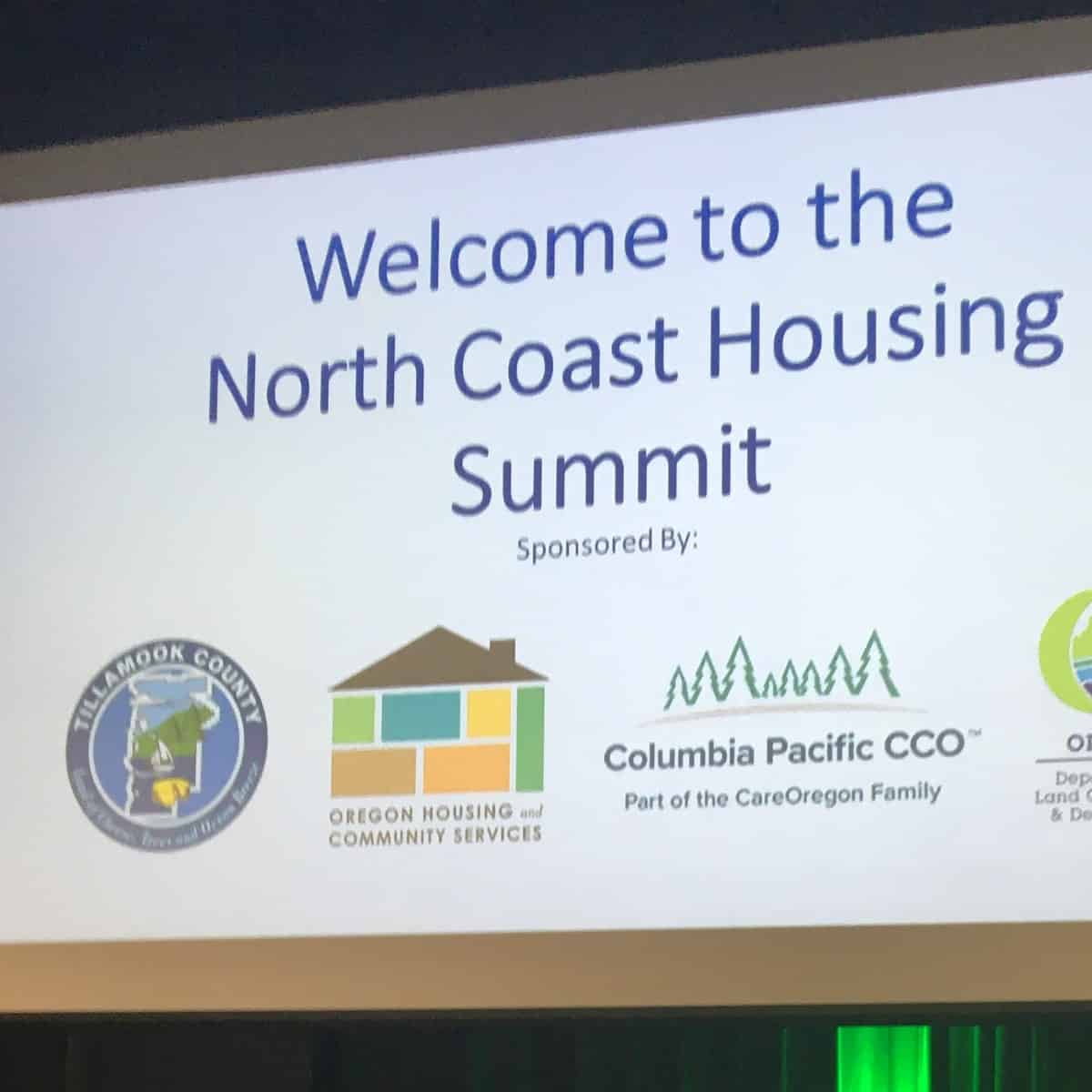 By Barbara McLaughlin for the Tillamook County Pioneer

On Tuesday, Dec 6, 2022, the first North Coast Housing Summit was held at the Convention Center in Seaside.  Attended by over 150 people representing a wide variety of organizations and at least 4 counties, it included presentations by two state agencies, local government representatives, nonprofits and developers.

The Summit was the vision of Tillamook County Commissioner, Erin Skaar and consultant, John Southgate.  In her opening remarks, Commissioner Skaar remarked that this was a “forward looking, solution oriented agenda”, with the goal of helping one another find ways to alleviate the housing crisis that exists here on the north coast.

Skaar also identified several keys needed to be successful in this work.  They  include: having champions passionately pitching the need for housing to all and sundry; the political will of governing bodies; an engaged and committed community; and data to inform decisions and actions.  She also talked about the magic that comes out of synergy: when one of those passionate conversations provides a contact with someone that holds a piece of the puzzle, and who knows others that could help, and that ultimately turns into a network of people working on the same goal of providing housing.  Since there is no single solution to the housing crisis, knowledge and action from different angles is hugely important to address the full spectrum of housing needs. 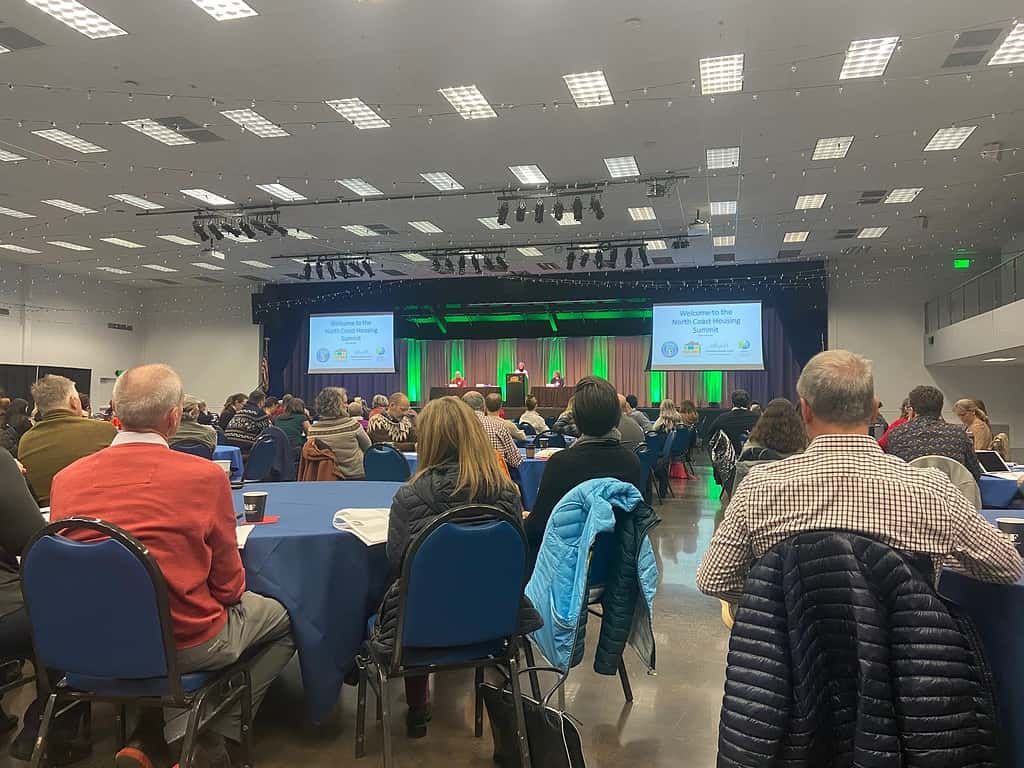 From the smorgasbord of presenters, the attendees were apprised of some of the different tactics and ideas being used to create more housing.

One of the themes that emerged is the importance of partnerships.  Solving this crisis needs to involve effort from all entities: state government, local jurisdictions, nonprofit organizations, developers, investors and concerned citizens.  Commissioner Skaar is hopeful and said “There is more funding and people on housing than ever before and it absolutely will happen.” Ethan Stuckmeyer from the Department of Land Conservation and Development (DLCD) said “Now is the time for the State and others to help.” (DLCD is a state agency that partners with local governments, and state and federal agencies, to address the land use needs of the public, communities, regions, and the state.)

And the State is stepping up. Stuckmeyer reported that the Oregon Housing Needs Analysis (OHNA) goes to the Legislature for approval in January. This report, produced in conjunction with Oregon Housing and Community Services (OHCS), found that Oregon has been deeply under producing housing for many years.  Part of this was due to the traditional way of determining if cities and jurisdictions had enough land to support growth. Determining the need for housing was basically a math problem and looked into the future and not what was happening on the ground.  It did not take into consideration regional issues, choice, accessibility, or how housing needs change for people over time. The three recommendations in the OHNA instead focus on things that actually get housing built:  plan for what’s needed, build what’s needed where it’s needed; and commit to working together with urgency.  link to the OHNA:

In addition, Kim Travis of OHCS indicated that state funding to rural areas of Oregon has increased dramatically in recent years, in part thanks to the persistent pressure from rural counties, including leaders from Tillamook.

Cities and counties are also stepping up.

Ordinances to allow accessory dwelling units (ADUs) are a low impact, relatively easy solution to increase housing. Cannon Beach allows ADUs in all zones.  Tillamook County’s proposed ADU ordinance had its first hearing at the Tillamook County Planning Commission on Dec 8th and goes before the Tillamook County Commissioners on January 30th.  And recent state laws are increasing the possibility of ADU’s both in urban growth boundaries and rural residential zones.

The Tillamook County Housing Commission provides one model for working on housing issues.  It has produced a Housing Needs Analysis to provide the data Commissioner Skaar talked about, has hired a dynamic Housing Coordinator and has several committees to focus on specific topics.  Beside the Development committee there is a Legislative Committee that researches Oregon State Legislature activity on bills related to housing and makes recommendations to the Housing Commission accordingly; a Public Education and Outreach Committee that develops strategic communications about the work of the Housing Commission, housing issues, and shares solutions; and a Finance Committee that seeks grant opportunities to support housing programs and reviews funding requests for housing development.  All committees meet monthly and are comprised of Housing Commission members and members of the public.  More information at https://www.co.tillamook.or.us/bc-hc

Other diverse solutions covered by the Government Solutions panel include prioritizing infrastructure funding; identifying opportunities for cities to acquire property; providing rentals for staff, allowing tiny home developments; studying practices of other areas experiencing lack of housing, especially in tourist based locales; and encouraging citizens to join state committees, speak out and support legislators and councilors who are working to solve this crisis.

And places for people to live are being built.

The State, through Oregon Housing and Community Services (OHCS), which provides resources for Oregonians to reduce poverty and increase access to stable housing, is providing funding for developers of affordable housing that serves people with incomes up to 80% of Area Median Income (AMI).  Travis of OHCS reported that their funding has helped create at least 241 housing units in Astoria, Tillamook, Lincoln City and Nehalem, either completed or in the works.

She also gave a halfway progress report on Oregon’s Statewide Housing Plan (July 2019-July 2024) which include statistics for homelessness, permanent supportive housing (an intervention that combines affordable housing assistance with support services to address the needs of chronically homeless people), affordable rental housing, homeownership and rural communities. All of these have either already met the goal of the Housing plan, are on track to do so, or are in progress.  Find the full plan here: https://www.oregon.gov/ohcs/Pages/oregon-state-wide-housing-plan.aspx

In Pacific City/Woods a 23 unit workforce development, called Kingfisher Apartments, is being built that has taken three years including a one year appeal process by the state Land Use Board of Appeals (LUBA) that ended in their favor.  Strong partnerships and the determination to proceed despite setbacks provided impetus for their success.

A 60 unit project in the city of Tillamook, Holden Creek, was successful in part due to the county tax abatement program and reimbursement from the city of Tillamook for an extended sewer line.  It was one of the projects that received funds from Oregon Housing and Community Services.

In Lincoln City Innovative Housing Inc is building 107 units with significant help from the city government and funding from OHCS.  One crucial piece for the success of this project was the acquisition of an important adjacent parcel they were able to purchase from an individual.  One of the city employees was able to establish a rapport with the owner that led to the sale. Proud Ground, a Community Land Trust in Portland is also working with Lincoln City on a separate project.

Astoria, through the nonprofit Clatsop Behavior Health, is working on permanent supportive housing for the homeless folks living on the street who can only think about day to day survival.

The Iron Tribe Network provides interim housing for families of people being released from jail in Columbia County and Gearhart among other locations.  It is unique in allowing men, women and children in one place.  One of its goals is to help families stay together by providing life skills and parenting programs.

And in three counties in eastern Oregon there are cottage home developments specifically for veterans with wrap around services.  Because these homes are small, around 500 square feet and of a simple design, they can utilize less skilled workers to help with construction.

The Summit showed that there is now a critical mass of community partners and stakeholders understanding the level of urgency around taking on the housing crisis.  Though there were specific audiences for some of the showcased developments, all housing being built helps everyone needing housing.  The more housing stock, the more choice people have and the more movement there is from one type of housing to another.  We need housing choices for all Oregonians and the efforts of everyone to get there.