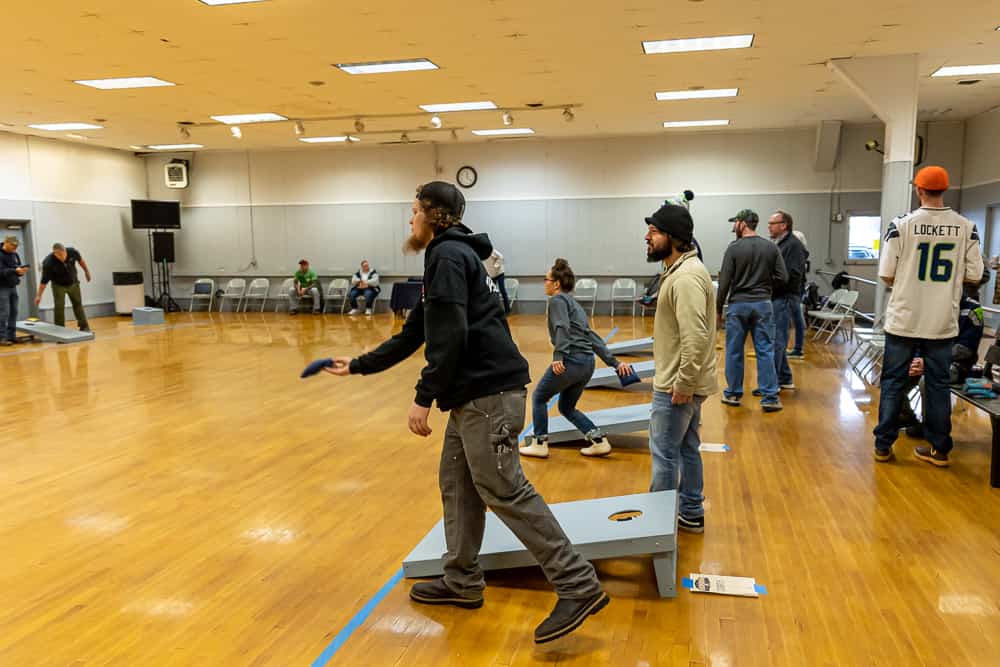 On Saturday, January 14th, 2023, the skating rink at the Tillamook County Fairgrounds was filled with laughter and smiles in the North Coast Throwdown Cornhole Tournament. Participants laughed and groaned with smiles as they tossed corn-hole bags across the skating rink floor. Some bags landed on the platforms. Others landed on the floor. More than one struck the ceiling.

Heidi Luquette, Vice President of Administration and College Relations, volunteered at the team registration table. “We had planned to put this on in March 2020,” she said, “But we had to cancel it.” After waiting for nearly three years, the event was finally on. “This is exciting,” she said. “We (the Tillamook Bay Community College Foundation) are raising money for the Career to Career scholarship.”

The TBCC website lists the following information: “The TBCC Foundation is a nonprofit committed to helping students gain a college education by awarding scholarships and building the capacity of Tillamook Bay Community College to provide vital educational opportunities for our community.”

It also provides additional information: “The Career-to-Career scholarship is a tuition scholarship available to qualified Tillamook County individuals. Students must have at least five years of work experience. As long as the student maintains his or her eligibility, Tillamook Bay Community College will award a tuition scholarship for the student to earn their first degree. This is an excellent opportunity for those returning to their education to complete a degree.”

Luquette explained that they had participants that really ran the gamut. “We have beginners and experienced players. We have a lot of players from the Elks. There are even people who drove in from Washington.” The foundation intentionally chose to keep it low key so it would be fun and more attractive for locals and less attractive for tournament players from out of the area. She explained that, “We really wanted this to be a fun community event. One of the goals was to connect with the community, to show that TBCC is accessible.”

Brita Lawrence, event organizer and Executive Director of the Foundation, moved throughout the room with a microphone, busily making announcements and coordinating the event. She took a few moments to comment before moving on. “I’m thankful that people came out to support us,” she said, speaking about the turnout and how great it was to meet so many people who were clearly having fun. 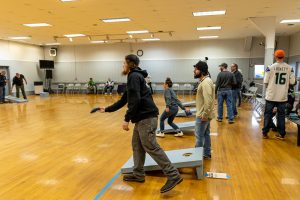 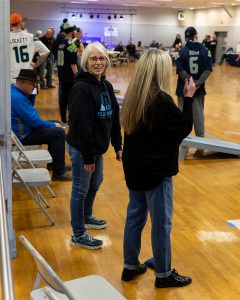 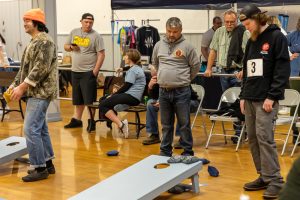 “This is a really cool fundraiser,” Albert Willheite, who was watching the event while waiting for his second match, explained. He added that it was fun and participants were enjoying it.

“I’ve never done it before” Kathy Gervasi said with a laugh. “We’re raising money for the college.”

“Even for someone without cornhole experience it was great!” JoAnn Critelli, who was playing for the first time, said. “I practiced the night before throwing a pair of socks filled with pellet stove pellets into a laundry basket! By the end of the tournament I was scoring!”

Luquette thanked their sponsors for the event, and pointed out that the Rendezvous restaurant was providing food and drink in the kitchen.

Judging from the positive comments overheard throughout the room, and the smiles, the event was a success for everyone.
Congratulations to the winners of the North Coast Throwdown Cornhole Tournament! It was a battle for the ages, but these three teams came out on top. Thank you all for supporting the Tillamook Bay Community College Foundation and the Career-to-Career scholarship program.