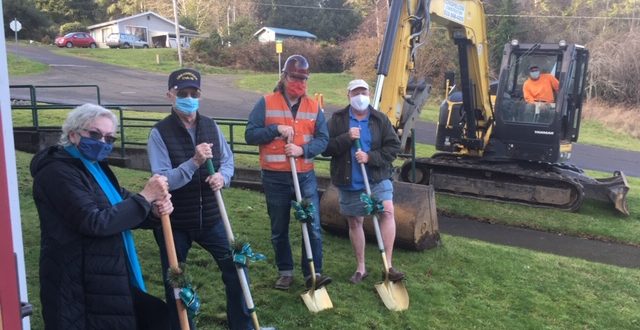 North County Recreation District (NCRD) in Nehalem held a groundbreaking ceremony adjacent to its Performing Arts Center (PAC) on December 9th. The occasion was a celebration of the start of construction of its new addition for the PAC, a lobby with ADA restrooms. This project was started several years ago because the first phase of remodeling for the Performing Arts Center, completed in 2016, did not have a large enough budget to add the lobby and restrooms. Since that time, patrons have been required to use facilities located in a separate building requiring a trip up a long tunnel which connects the two buildings. In addition, the lobby will provide a space for gathering prior to performances and during intermissions. The PAC has hosted concerts by a number of Grammy award winning, or nominated, artists; national and even internationally known musicians; the Newport Symphony Orchestra; plays by Riverbend Players and Rising Tide Productions, the Missoula Children’s Theater; local talent showcases; the Trashion Show; fundraising events; organizational meetings; an Oregon Public Broadcasting radio show; and even a wedding.

The lobby project is being funded by a Tillamook County TLT (Transient Lodging Tax) grant, a Ford Family Foundation grant, the Friends of NCRD, and NCRD. The general contractor is Cove Built LLC from Arch Cape with excavation sub-contractor Longfellow Excavation of Nehalem, foreman Dave Cram of Nehalem, and Inland Electric from Seaside. The architect is Jim Fanjoy, Nehalem, with Brittell Architecture. The vast majority of NCRD funds are expended in our local community. Construction is expected to be completed by June, 2021.