“Now hear this!”
The Tillamook community lost a true pioneer and one of the county’s great pillars of leadership in his generation.
Roy Peterson was born in Pendleton, Oregon and passed away peacefully at his home in Tillamook, January 21, 2022 – just four days shy of his 99th birthday.
Roy spent time in his youth during the Great Depression in the Portland area and as a teenager was a farmhand for the Tharp family where he helped milk cows, tend horses, and pumped water day and night because there was no plumbing on the farm.
In his late teens, Roy got a job fishing in Astoria, driving a team of horses to do so. The horses stayed in a floating barn on the Columbia River and at the end of the summer job, Roy left with $300 – pretty good by 1939 standards.
Roy graduated from Battleground High School in 1941 and enrolled at Washington State College in Pullman, Wash. after receiving an agricultural scholarship from Sears-Roebuck. During his senior year in high school, he worked in a poultry plant in Battleground and initially studied Poultry Husbandry at Washington State.

While on the train to Pullman, it stopped about 20 miles out of town and a few men got onboard looking for anybody headed to Washington State. Most were continuing to Moscow over the border at the University of Idaho. When they learned Roy was bound for Pullman, they revealed themselves as members of Phi Sigma Kappa, inviting new students to stay at their fraternity house for free meals and a place to stay for a couple days as Roy got acclimated – and undoubtedly would have loved him to pledge afterward.
One of the members of the fraternity was a man named Dean Lindley and became a fast friend of Roy’s. He invited Roy to a dance at the Kappa House, where he planned to introduce Roy to his sister Claire Lindley.
After meeting Claire, the two shared their very first date over a Coke at the Cougar Cottage and began to go steady. They would see each other at church and on weekends. On Sunday, Dec. 7 in 1941, Roy and Claire left church to learn about the bombing of Pearl Harbor. Their first question was, what – and where – is that? Things changed after that. The Army offered to pay for a select group of men to change their course of study to veterinary medicine, so Roy joined his future brother-in-law Dean and two others. They joined the Army, but stayed on campus in Pullman to finish their studies.
Roy and Claire were married Dec. 31, 1944 at her parents’ home in Colfax, Wash. and spent their honeymoon night across the border in Moscow, Idaho. When the newlyweds returned to Pullman, they moved into a place together and finished their degrees at Washington State.
After graduation, an opportunity with veterinarian Dr. Andy Lloyd testing dairy cattle for brucellosis brought Roy and Claire to Tillamook. A year or so after arriving, a classmate of Roy’s offered him a partnership at his veterinary clinic in Spokane, Wash. and the Petersons chose to stay in Tillamook, and the community was better for it.
Roy and Claire became entrenched in the county and led very social and fulfilling lives. They were not born in the area, but made this place their home, raising their three children and eventually becoming friends and mentors to others who would move to Tillamook County, touching countless lives along the way. Roy was always quick to lend a hand, provide people an opportunity, or donate his time or money. His generosity was well-known.
The Petersons were host family to Annick, an American Field Service Student from France, 1966-67, and have kept in contact over the decades. They also hosted nine different young people from Japan through the YMCA’s English study tour from 1970-75 and in 1981.
Roy loved the bounty of the Oregon Coast, taking great pride in his role as not only a veterinarian, but also a dairy farmer and member-owner of the Tillamook County Creamery Association. Whenever he traveled or meet new people, he was quick to share a loaf (or several) of Tillamook cheese.
Roy served Tillamook County well as a veterinarian, focusing primarily on larger animals, but always making time for pets. For 40 years, Roy was the track vet for the Tillamook County Fair. While balancing life as a veterinarian, Roy and Claire still found time to travel. For many years, Roy was an elected officer of the American Veterinary Medical Association and he and Claire would visit many states under his jurisdiction annually. The Petersons also traveled internationally, visiting many countries around Europe – including Russia and much of Scandinavia – Roy was a proud Dane, after all. To know Roy was to also know his unlimited and unmatched charisma. During a flight to Japan with their dear friends Virgil and Orella Chadwick in 1980, Roy wanted to show off one of his favorite skills. As flight attendants and other passengers watched, Roy Peterson stood on his head somewhere over the Pacific Ocean. They were on their way to watch a football game between Oregon State University and UCLA.
After several decades of service, Roy retired in the early 90s. Retirement was a very busy time for Roy and the Petersons as he could still be found every morning at the dairy he co-owned with Claire, his son, and daughter-in-law.
Even deep into their 90s, Roy and Claire maintained a very good sense of humor. Roy loved reading the funnies with Claire and it was always a treat for a comic strip of “Pickles” to induce hysterical laughing and wheezing from him.
Some of Roy’s many civic engagements and accolades include: 2005 Pioneer of the Year, 1977 June Dairy Parade Grand Marshal, Kiwanis International Tillamook Club Vice President, Tillamook County Shrine Club President, Tillamook County General Hospital Board, Tillamook County Easter Seals Society, Tillamook County Chamber of Commerce Agriculture Chairman, Marie Mills Center Board Member, Tillamook Mounted Sheriff’s Posse Captain, Tillamook YMCA, Oregon Farm Bureau, Masonic Lodge, Al Kader Shrine, Scottish Rite, BPOE, Tillamook Antique Car Club, and Methodist Men.
He is a past president of the Oregon Veterinary Medical Association and represented Oregon for four years as the alternate delegate and four years as the delegate in the American Veterinary Medical Association House of Delegates.
Roy Peterson was larger than life and one of the greats. He will forever be loved and missed by his family, friends, and all those lucky enough to have spent time with him.
A memorial service for Roy will be held Sunday, March 13.

Here’s a video from January, 2020 of Dr. Roy and Claire Peterson:

EDITOR’S NOTE: We are including Claire Peterson’s obituary from the fall of 2021 as we did not post this, and it seems fitting to have their obituaries together as they are now rejoined together. 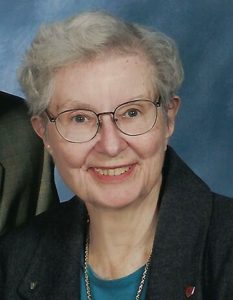 Claire Peterson died peacefully at her home in Tillamook, Ore. on Oct. 31, 2021 at the age of 97.
Emma Claire Lindley was born to Troy and Roberta Lindley in Washington state, where she grew up on the family wheat ranch. She was born the second eldest of five children and is preceded in death by her parents and siblings Dean, Marjorie, Robert, and Barbara.
She preferred, and went by, her middle name Claire, because in her words, “Emma was a name of old ladies when I was a little girl. In fact, I was named after a great aunt and so I didn’t want people to think I was an old lady.”
She attended a two-room country school and during her youth was named a Fair Farmerette. For two summers, lived on a farm cooking every meal and baking two pies every single day.
After graduating high school, Claire attended Washington State College in Pullman, Wash., where she met her future husband, Roy Peterson, on a blind date over a Coke in the Cougar Cottage as freshmen in September 1941 and were married at her parents’ home Dec. 31, 1944 in Colfax, Wash.
Claire graduated with a degree in business administration and economics from Washington State College. She and Roy relocated to Tillamook for a veterinary position and Claire worked as a secretary in a law firm. The pair made a life in Tillamook and planted deep roots.
Once the Petersons had settled into life in Tillamook, Claire became heavily involved in the community with countless organizations like AAUW, Tillamook School Board, Tillamook United Methodist Church, Shakespeare Club, chairwoman of the local Red Cross, 4-H, her group of friends called “The Hens,” and hosted Japanese exchange students through the YMCA. Claire even had a hotel partially named in her honor: the bygone Mar Clair Inn.
During retirement, Claire could always be found reading a book, laughing at the funnies in the daily Oregonian, volunteering at several organizations into her late 80s, tending her roses and other plants, visiting with friends and relatives near and far, and preparing delicious meals and her famous rhubarb pie.
She and Roy loved to travel and meet new people – once, in the 1970s, the pair bought a Mercedes straight from the factory in Stuttgart, Germany and proceeded to drive it around Europe over the course of several weeks, visiting the home of their French exchange student Annick along with many other stops around the continent, before shipping it across the ocean to use back home – while wearing her leather driving gloves.
Claire will always be remembered as an inexhaustible fountain of knowledge, the best maker of pie crust the world has ever known (she will say it is because of her cold hands) and an overall incredible woman. She is greatly missed by not only her family, but the community as well.
Claire is survived by her husband of nearly 77 years, Dr. Roy H. Peterson and their children Ann (Richard), Jean (David), and Eric (Loretta). She is also survived by 11 grandchildren and their children.

Life and Times of a Great Woman Emma Claire Lindley

(As told by Claire’s children and grandchildren)
Emma Claire Lindley was born November 29, 1923 at the Mustard Hollow Farm House of her parents Troy and Roberta Lindley. Mustard Hollow is about 4 miles from Dayton Washington. This was wheat farm country (Wheat farms in Dayton are as common as dairy farms in Tillamook). The birth was attended by Dr. Robinson (who was married to Claire’s great aunt, Adelle Robinson). Claire’s grandmother, Maggie Houtchens was also there. She worked with Dr. Robinson as his practical nurse. Emma Claire was the second born child, her brother Dean was 1 year older, Marjorie was 2 years younger, Barbara was 13 years younger and Robert or Bob was 16 years younger than Emma Claire. In 1929, when Emma Claire was 6 years old, her Father lost his wheat farm when the market crashed (the beginning of the Great Depression). Claire wrote that the Great Depression was the most important event in her childhood. What specifically she remembers is “ you never got new clothes.”