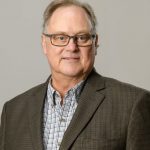 From Tillamook County Transportation District/THE WAVE: It is with heavy hearts and great sadness that we announce the passing of our fearless leader, dear friend, and General Manager Douglas Pilant. Doug has dedicated the past 10 years of his life to the Tillamook County Transportation District. He has brought so many amazing things to this community that we will forever be grateful for. We are all going to miss him dearly, but he will never be forgotten.

Doug was born on January 30, 1960 in Jerome, Idaho. He was the first of three children born to Carroll and Kathryn (Durfee) Pilant. Doug was raised on the family cattle farm near Wendell, Idaho, and graduated High School in Aberdeen Idaho in 1978.

Immediately after high school, he moved to Albany, Oregon where he managed a service station. While pumping gas, he caught the eye of an older woman, who later sent her daughter Cynthia (Cindy) to meet Doug. Cindy and Doug soon married and had two children together, twin sons; Jerrod and Justin.

Determined to provide a good life for his sons, Doug moved to Washington and began his college education. Here, he met his future wife, Charlotte Riester, at the YMCA where Charlotte looked after Doug’s sons. Soon, Doug’s third son Bryan Riester was born. However, Doug was resolute in his desire to complete his education and moved back to Idaho where he studied at the College of Southern Idaho, and finally at the University of Idaho (his childhood dream), where he earned his Bachelor’s of Science in Geography. Doug proudly graduated in the University’s 100th graduating class of 1990.

After college, Doug moved to Oregon where he began his 30-year career in Public Transportation at the Rogue Valley Transit District in Medford Oregon. It was here, that he re-connected with Charlotte and married in 1992. They had two daughters: Bailey and Hannah Pilant. Doug held various transportation jobs in Oregon and California, taking him to Salem Oregon and Ukiah California, before his final stop at the Tillamook County Transportation District on the Oregon coast. Doug was immensely proud of his career in public transit and is highly respected for his contributions to Oregon’s public transit.

Finally, Doug was an avid University of Idaho Vandals Fan! He loved following Vandal athletics and traveling back to Idaho to attend sporting events. Additionally, he was passionate about family genealogy and enjoyed playing tour guide on the Oregon coast, hosting family and friends. Above all, he most cherished spending time with his children and grandchildren.

He is preceded in death by his parents.