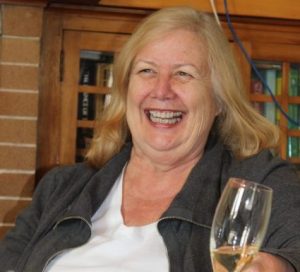 Merrianne Garrow Hoffman, aged 70, of Gig Harbor, Washington, passed away on Sunday, June 16, 2019, following a motor vehicle accident. She spent the last weeks of her life doing her favorite thing: traveling to beautiful places with her family and friends.
She was born in Fresno, California on September 14, 1948 to Francis and Elenore (Kruse) Garrow. She graduated in 1966 from Lowell High School in San Francisco, California, and married John Hoffman in 1970, whom she met in the Haight-Ashbury district during the Summer of Love. They welcomed two children in 1976 and 1978, and moved from San Francisco to Daly City, then settled in Danville, California. While working full time, she completed her bachelor’s degree in 1986 at the University of San Francisco.

Following a thirty-year career at Pacific Bell in San Francisco and San Ramon, California, Merrianne retired to Pacific City, Oregon, where she lived for twenty years. There she involved herself deeply in numerous community organizations. She was a founding member of the Nestucca Valley Community Alliance, and served as a Director for six years, during which time she worked to bring a community park to Pacific City. She served two years on the Kiawanda Community Center Board of Directors, and was especially proud to work with them as chair of the Pacific City Birding & Blues Festival. She served eight years as a Tillamook County Planning Commissioner and four years as President of the Pacific City-Nestucca Valley Chamber of Commerce; through these positions she was involved in the creation of Sitka Sedge State Natural Area. She recently realized a decades-long goal to teach in higher education, when she became an instructor at Tillamook Bay Community College, where she touched the lives of many students. She also won election to public office, joining the Tillamook County Transportation District Board of Directors. Based on her community involvement, Merrianne was named “Realtor of the Year” in 2014 by the Tillamook County Board of Realtors, and “Citizen of the Year” in 2014 by the Pacific City-Nestucca Valley Chamber of Commerce.
Merrianne adored time with her children and grandchildren, and would travel often to San Francisco and Oakland, California to visit them. She spent one year in San Francisco as “granny nanny” to her two grandsons. At home in Pacific City, she entertained countless visits from family and devoted friends. In 2006-2007, she hosted a foreign exchange student, Fon Chittavil of Thailand. She had numerous pets throughout her lifetime; her most recent dogs, Bubba, Spike, and Molly, were her constant companions.
Always curious about the world, she set a goal to travel to all fifty states before she turned fifty, and to sixty countries before she turned sixty – she achieved both. Her favorite traveling companions were her children, her cousin Sheryl Cashmore, friends throughout the decades, and her cruising and touring pals the “Cunard Table Trash.” She also attended annual gatherings of friends, called “Wild Women’s Weekend” and “Booze Bears and Broads.”
She recently moved to Gig Harbor, Washington, to live near her son and his family. She looked forward to upcoming visits with friends, and more vacations with her family. She had such hope for her future, and happiness in her heart. Her greatest wish was to live long enough to see her grandchildren grow up.
She will be missed terribly by her family and her many friends, old and new. Whether you knew her for life or only a short time, you know she was a shining light, ready to smile, laugh, and celebrate. She was intelligent, clever, funny, and generous.
Left to honor Merrianne and remember her love are her son Dan Hoffman, daughter-in-law Julie Hoffman, and granddaughter Penelope Hoffman of Gig Harbor, WA; her daughter Laura Murphy, and grandsons Declan Murphy and Rowan Murphy of Oakland, CA; her niece Jenny Garrow of Auburn, WA; her sister Noel (Garrow) Ameral of Fresno, CA; her nephew John Ameral of Fresno, CA; and her niece Angie (Ameral) Fitzsimmons of Fresno, CA. She was predeceased by her husband John Hoffman in 1990, her father Francis Garrow in 1985, her mother Elenore (Kruse) Garrow in 1991, and her brother Frank Garrow in 1990.
A memorial and celebration of life will be held at 5pm on Saturday, July 27 at the home of her daughter Laura, at 4050 Sequoyah Rd, Oakland, CA 94605, where a tree will be planted in her honor. In lieu of flowers the family suggests a memorial gift to the Nestucca Valley Community Alliance’s Community Park Fund: NVCA, P.O. Box 253, Pacific City, Oregon 97135.