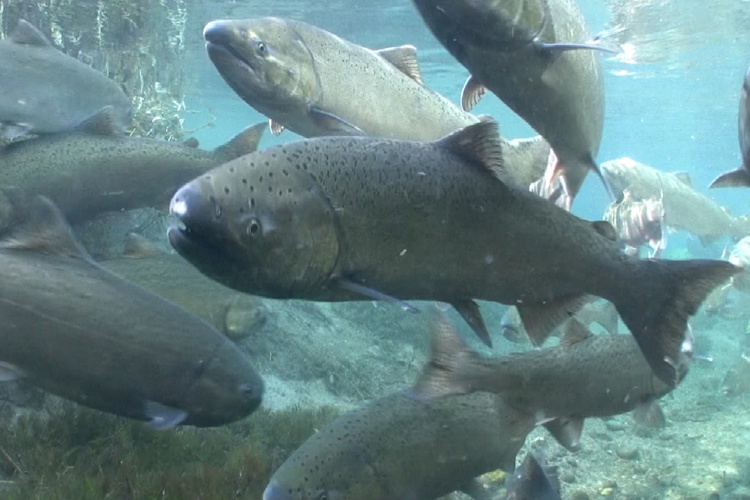 SALEM, Ore.—For the second year in a row, fishing for wild fall Chinook salmon will be restricted in coastal rivers, due to poor escapement in 2018 and poor forecasted returns this year.
Most of these temporary regulations will be in effect from Aug. 1-Dec. 31, though a few don’t start until Sept. 16 or Oct. 1.
Bag limits vary by basin, and a few rivers and creeks will be closed entirely, due to expected low water conditions (until flows increase later in the fall).

See regulation details at the links below (table marked Summer/Fall Season Rule Changes for Adult Wild Chinook Salmon):
NW Zone https://myodfw.com/recreation-report/fishing-report/northwest-zone
SW Zone https://myodfw.com/recreation-report/fishing-report/southwest-zone
“Due to poor runs last year and low forecasts for this year, we need to take steps to protect these wild populations,” said Christine Mallette, ODFW’s Ocean Salmon Technical Resources Manager. “We appreciate anglers’ understanding and their input to the proposed conservation measures that were discussed with different coastal communities during six public meetings earlier this summer.” Most anglers who attended expressed support for ODFW’s proposed conservation measures.
Poor out-migration and ocean conditions in recent years, particularly higher than normal water temperatures, are likely the reason for low Chinook salmon returns. Drought conditions while rearing in their native streams and lingering effects of the blob (large mass of warm water in the Pacific Ocean) both contributed to poor survival.
“Longtime anglers will be familiar with the ups and downs of salmon and steelhead abundance due to the cyclical nature of their runs,” said Mallette. “While we believe salmon runs will improve, we need to implement additional conservation measures now to protect Oregon’s wild fall Chinook salmon into the future.”
Note these restrictions on adult wild Chinook daily and season bag limits do not apply to fin-clipped hatchery fish, which will add additional angling opportunity to several coastal basins. In these areas, anglers may harvest adult hatchery Chinook salmon until the daily bag limit of 2 has been met. (In areas open for adult wild Chinook salmon harvest with the temporary bag limit, no more than 1 wild adult Chinook salmon may be harvested per day as part of the daily bag limit.)
The daily limit for jack Chinook salmon (hatchery or wild) remains 5 fish per day and does not count towards the adult daily limit. However, once the adult daily limit is harvested, anglers cannot continue to fish for jack salmon.
Although wild returns are expected to be poor for most of Oregon’s coast, forecasted Chinook salmon returns to the Rogue and Umpqua rivers are good this year, so permanent regulations will be in effect this fall. Low flow angling closures on the South Coast may be lifted when Chinook salmon have distributed and forecasted flows are expected to remain high enough to allow fish to migrate. These improved conditions are expected for early to mid-November and are based on historical river flows.
Hatchery coho salmon fishing in the ocean has also been excellent this year, which is mainly driven by abundant Columbia River stocks. However, ODFW has not proposed any coastal in-river fisheries for wild coho salmon this year, due to low forecasted returns.