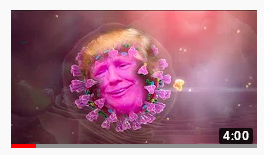 By John Rogan
In 2020 the world is facing two crises, global warming with long term consequences and the Covid-19 pandemic with short term consequences. Sadly for the world, we have a man in the White House who is incompetent to handle either. At some point he has labeled both of them as hoaxes. Consider his response to just the latter crisis.

Previous presidents, the Bush’s, Clinton, Obama, all put structures in place to deal with a pandemic should one ever occur. Trump either eliminated or gutted most of these. For example, he disbanded the White House Pandemic Response Unit. He did not deny doing so but simply said, “I take no responsibility for that.” (March 20th.)
Some of his other pronouncements are listed below.

January 22nd. We have it totally under control. It’s one person coming in from China. It’s going to be just fine.
February 10th. Looks like by April, you know, in theory, when it gets a little warmer, it miraculously goes away.
February 24th. The Corona virus is very much under control in the USA.
February 26th. The 15 (cases in the US) within a couple of days is going to be down to close to zero.
February 27th. One day it’s like a miracle, it will disappear. It will be gone by Easter.
February 28th. This (Covid-19) is their new hoax.
March 6th. I think we’re doing a really good job in this country at keeping it down… a tremendous job at keeping it down.
March 11th. No, I’m not concerned at all. No, I’m not. No, we’ve done a great job.
March 13th – It will go away. It’s really working out.

At this point Trump has been persuaded that he needed to take the pandemic seriously, and he insists that he has done so all along, and has been totally focused on dealing with the situation. History now has to be rewritten.
March 17th. I felt it was a pandemic long before it was called a pandemic.
April 17th. Trump calls on supporters to liberate states where restrictions to prevent the spread of the virus have been imposed.
April 20th. I haven’t left the White House in months except for a brief moment to give a wonderful ship, the Comfort. (Fact check: He took golf trips on February 1 and 15 and March 7 and 8. He held rallies on February 10, 19, 20, and 28.)
April 23rd. Trump suggests injecting bleach as a cure for people with the Corona virus should be researched.
May 8th. Coronavirus will go away without a vaccine.
July 2nd. I think that at some point that’s going to sort of just disappear, I hope.

And now the USA leads the world in the number of daily cases and deaths. So much incompetence. Such an abysmal failure of leadership. And yet in the long run, Trump’s response to the global warming crisis is likely to be even more destructive than his response to the pandemic.

EDITOR’S NOTE: Here’s a YouTube Coronavirus video parody of The Kinks “Lola” that we shared on our Facebook page.