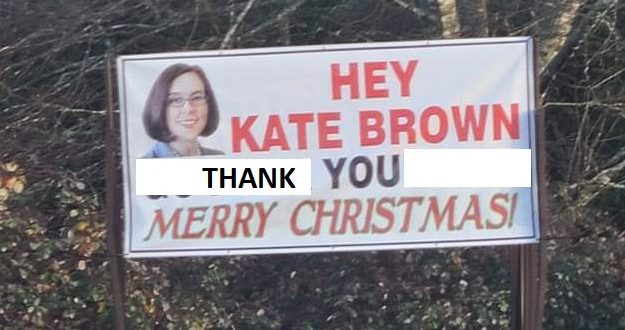 By Fred Bassett, Chair, Tillamook County Democrats
This past week I was driving with my grandsons through Pleasant Valley but had this rather unpleasant experience. In plain sight along Hwy. 101 was a large sign with big bold letters that read “XXXX you. Governor Kate Brown. Merry Christmas.” I may not have listed this quote in the right order, but you know which expletive I’m referring to and you get the drift.
My grandsons were a little confused and asked me what the sign meant.
Egad! What do I say?
Do I tell them that I have a hard time understanding why its author would want to attack the Oregon governor in this way?

I have been watching Governor Kate Brown since she took office in 2015, and, personally, I think she has done a great job, particularly considering the disastrous impacts of the Covid 19 pandemic. Can I explain to my grandsons that Gov. Brown has the safety and welfare of all Or-egonians in her heart as she deals with daily changes in infection numbers, deaths, and an ever-increasing base of knowledge about the disease.
Shall I explain that this is called the “novel” corona virus for a reason? Everything about it is new, and therefore, from its first appearance in our world about a year ago, we’ve had to learn how to deal with its effects and how to keep ourselves as safe as we can. My grandsons, of course, wear masks, and, until last week, were getting all their classes on line. They know the pandemic is serious.
But, how can I help them understand what it’s like to make the tough decisions required of our governor? I could share some basic statistical information that shows how important Kate Brown’s leadership has been. I could show numbers in a report from Johns Hopkins University that prove that Oregon, with the 26th largest population among our Untied States is only 41st in infection rates. In fact, I learned that among the four states closest in population to Oregon – Louisiana, Oklahoma, Kentucky, and Connecticut – Oregon has done by far the best job of controlling the virus, with the states mentioned ranking 22nd, 25th, 28th, and 34th in infections respectively.
I could then go into great detail explaining that prior to the pandemic, opposition to Gov. Brown’s attempt to deal with the Climate Crisis, the most crucial issue facing the human race today, had precipitated several recall attempts. While I’m on that soapbox, I could tell my grand-sons that Gov. Brown’s staunch defense against attacks by President Trump of Oregon’s rights to control its destiny in matters of policing, immigration, education, the environment, etc., had also created opposition.
But, I’d want them to know that opposition is what makes this country work, and that Gov. Brown knew that before she accepted the job. It’s makes her job tough. But, when she is able to reach agreements with constituents on both sides of an issue, which she has done often, her job is also very rewarding.
However, I’d still have a hard time explaining to my grandsons why this opposition would be exhibited so profanely along Hwy. 101. I have a hard time understanding it myself.
So what do I say? I know.
I’ll tell them that whoever wrote that sign and put it in their yard simply misspelled the word “Thank.”
Yeah! The sign should read, “Thank You Governor Kate Brown, Merry Christmas.”