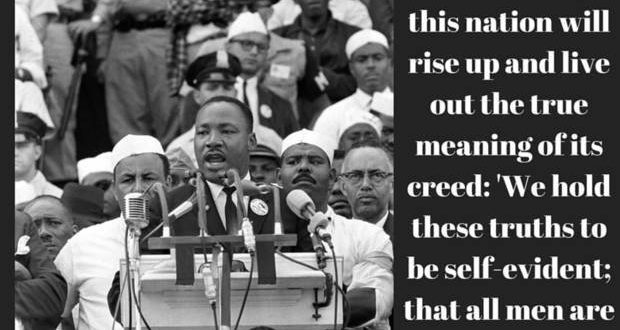 By Stevie Stephens Burden
As this chaotic time in history continues, I am reminded of the man whose legacy we celebrate tomorrow, Martin Luther King Jr.  Reverend King was an American patriot and hero.  He boldly asked our country to respect our own diversity.  To recognize that the differences in our colors was negated by the make-up of our hearts.  We are the country where equal rights are guaranteed to all of us by the very nature of our foundations.  We are a country committed by declaration and action to be governed by the rule of law.  Reverend King understood that.  He also understood that in our right to free speech, we were not given the right to disobey the laws or Constitution of our country.  The great man revered those tenants and obeyed them.  When he brought the cause of equal rights to the attention of the world, he did it without the need for violence, or threats, or disrespect.  His beliefs did not allow him the latitude to meet his opposition with arms but rather he met them with the passion of his belief in truth and equality.

He said, “…I have a dream that one day this nation will rise up and live out the true meaning of its creed.  …We hold these truths to be self-evident that all men are created equal…”

He said, “…I have a dream that my four little children will one day live in a nation where they will not be judged by the color of their skin but by the content of their character…”

It is our character as a nation, and as individuals, that is being fought for now.  This month in history will go down as the best and the worst of that dream.  We saw our creed and Constitution trampled by those who chose to resort to lawlessness and insurrection because they were unhappy that they didn’t get their way and they believed that violence was an acceptable way to bring their grievances forward.  They brought them forward by declaring war on their own government.  They brought them forward with death threats, battering rams, looting, and the degradation of the heart of our Republic.
But the good in us met those threats and that violence not with arms and voices raised in hate but in the quiet actions of our Congress doing their job and providing governance by the rule of law, despite the violence.
The inflammatory atmosphere right now in this country makes it difficult to remember that fundamentally we are all Americans.  As Americans, we have the privilege of a government that has given us a means by which to bring our grievances to our representatives.  And it is not through hate speech or violence.
As we strive to move forward as a country, I believe what I learned from Martin Luther King Jr and that is to be lawful, to be respectful, to be compassionate, and to be civil.  So out of respect for the great man that we celebrate today, I am signing this pledge of civility (from CivilityFirst.org).  It is my commitment that as we move forward in these difficult times, I will meet those whose beliefs are different than mine with civility and respect.  I invite our elected officials and all of you to do the same.

In order to create a community, state, and country where we are each treated with civility and respect, I affirm that I will:

1. Value honesty and good will while striving to solve problems.
2. Attempt genuinely to understand the point of view of others.
3. Model civil behavior and tone, online as well as in public, by: