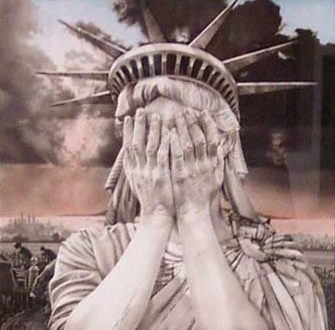 By Fred Bassett, Chair, Tillamook County Democrats
It is with great sorrow, immense concern and no small amount of fear and confusion that I watch the situation unfold in our national capitol. Because, as I listen at this moment, we are being told that there is no clear view or way to predict what may come from the mouth or thumbs of the current resident of the White House, it is impossible to determine what will unfold during the next few hours (or days.)

However, I firmly believe that Democracy in the United States will prevail. As I am watching, members of Congress are returning to their respective chambers and, despite those who will still object to the proceedings of verifying states’ Electoral College votes, the elections of Joe Biden and Kamala Harris will be confirmed.

In this moment, I just heard that the woman who was shot in the acts of terrorism that have befallen our Capital has died. This is so terribly sad.

My fear and confusion created by today’s events are based in concerns about where do we go from here. As I have stated before, I have a sincere belief that here in Tillamook County we can work to bridge the gaps that divide us to solve our very serious problems. This won’t be easy, but we have too many things in common and too many positive things we can do together, to let personal disagreements on how we get there interfere.

However, we are not in a Tillamook County bubble, or even an Oregon bubble. We are part of these United States and our very form of government is and has been under attack. Our U.S. Senators and Representatives were forced out of their offices, out of the ability to complete the job we elected them to do, by a lawless mob of terrorists who were incited to their illegal and murderous insurrection by the President of the United States.

Regardless of how we voted, what we believe socially, politically, morally, personally, we must reach an agreement that these acts of deadly terrorism are labelled exactly as that and that those responsible, including the President of the United States, are held responsible.

I, like all of you, will be watching for what is next and hoping for the best. I wish you all good health. Please stay safe.