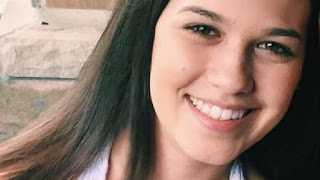 By Romy Carver
Today is my birthday. It’s supposed to be “my day,” but I’d like to share it with someone special.
I recently learned that I had a birthday twin. Her name was Jaime Guttenberg. If that name sounds familiar, it’s because she was in the news a few years ago.
Jaime was only 14 years old the day she died, the same age as my granddaughter. She died on a typical day doing typical kid things. She was in school. Her school may sound familiar too: Marjory Stoneman Douglas High School in Parkland, Florida. It was Valentine’s Day of 2018 when a former student walked into the school with an AR-15, and Jaime was one of 17 people whose stories ended that day.

I try to think of what I was doing at the age of 14, and the idea that someone would walk into my school and murder me for no apparent reason was the last thing on my mind. It’s unthinkable. I was probably laughing with friends, maybe complaining about a class, getting ready to play in the band at a basketball game. Not thinking I was going to die that day. Jaime wasn’t either. It was Valentine’s Day, so she was probably planning a special day. Maybe she had a crush who she was thinking about, or maybe she was looking forward to parties and fun later that day.
Jaime’s dream was to be a mother and a pediatric physical therapist. She was described as sensitive and compassionate, someone who looked out for underdogs. Her smile and her presence lit up a room. She was a beloved young woman with a bright future, who her loved ones speculate had probably been kind to the person who took her life, because that’s who she was. Jaime was a ballet dancer. She loved animals and volunteered with the Humane Society.
The young woman who her family called, “the energy in the room” was ripped brutally from her life, her family, her future, simply for going about her daily life. She will never turn 16, graduate, become that physical therapist, or have children.

Today, as I think about all the living I have done since the age of 14, over four decades of living, I grieve for Jaime. Today, she would be 18, finally an adult! She would have just graduated from from high school. Like me, she would have turned 18 the month after graduation. Her whole life would be ahead of her. She would probably be excited over being accepted to a college she wanted to attend in the fall, and maybe she’d have a sweetheart. This would have been a busy summer for her as a young adult, but I clearly remember the summer after my high school graduation as a delirious time. The world felt big but I felt ready and I had just conquered 12 years of school. I wanted to launch!
Jaime is frozen at 14. Her dreams are gone, and her devastated brother and parents are left to survive without her. They are now activists, who logically want assault weapons out of the hands of murderers. Not much to ask. Those who survived the shooting are changed forever, from young hopeful children to outspoken advocates who are harangued and harassed by “gun rights” people who think it’s okay to torment kids who have been shot. These kids didn’t sign up for this gig, it was handed to them by a mass murderer.
Jaime deserved this day. She deserved a whole lifetime. Today was her birthday.

Every person deserves to live their life without having to worry about being murdered. It’s ludicrous to even be writing these painfully obvious words, but some seem to believe their “right” to stockpile guns should override the safety and well-being of others.
It’s incredibly sad that the United States’ gun worship has created people who are so terrified of their fellow humans that they must carry deadly weapons for such simple things as going to the grocery store. That’s no kind of life.
As we all know, gun deaths continue to climb. Not just murders, but accidental and completely preventable deaths are a daily occurrence in a country that has become heavy on pride and light on common sense. We’re continually only a few steps from disaster due to the gun worship, yet the deaths continue. Shootings that once dominated new cycles for weeks are now barely a blip because they are a daily occurrence.

While I appreciate birthday wishes, please take a moment out of your day to think of Jaime, for her family who are enduring this important day without her. I would like to dedicate my birthday to Jaime this year, to a girl who never got to be a woman. For Jaime, for all the murdered children at Marjory Stoneman, at Thurston High, at Sandy Hook, and at all the other schools, we can do better.
Jaime’s father, Fred Guttenberg, has created a GoFundMe in honor of Jaime’s birthday today, to raise money to continue what has become his life’s work. Orange Ribbons for Jaime has a scholarship program and works to stop gun violence. They also raise funds for programs that help animals and children. They are wonderful people.

Here is a link to their website, which also features the current GoFundMe. Since Jaime is no longer here, her family honors her by helping others: Orange Ribbons for Jaime. If you’d like to honor Jaime, please visit the site and learn how they have continued her legacy of service.

You can read more of Romy’s “Peace Out Loud”s blog at www.romycarver.com