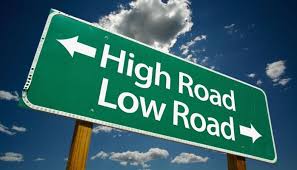 By John Rogan
Hitler is perceived as the major villain of the 20th century. However what is frequently overlooked is that none of his atrocities could have been accomplished had not millions of ordinary Germans willingly abandoned their long-held principles and values in order to give Hitler a blank check. It is also instructive to examine how the descent into darkness unfolded. The German people were first made to accept what was to come in abstract terms before concrete actions were undertaken. Hitler got them to accept that Jews should be persecuted before it actually started to take place.

There are similarities between Germany in the early 1930s and our country today. Trump’s boast that he could murder someone in broad daylight and not lose support need not be taken literally. No one believes that he will ever make good on this boast. Rather it should be seen as a clear directive to his followers. If you wish to become a member of his base you have to abandon any principles or values you may once have had, and grant Trump your acceptance should he decide to commit a crime, whether serious, like murder, or trivial. It also means that you have to abandon the long held view that the character of our leaders matter, and that now lying, immoral behavior, cheating, and demeaning taunts, all contrary to biblical teaching, must be regarded as acceptable. ‘Results, not character’, is the new mantra!

The process of making crimes acceptable has already been underway for some time. Trump suggests periodically that political opponents should be locked up, as is routinely done in dictatorships around the world. His followers, time and time again, express delight at this notion, and call on him to act. If and when Trump ever decided to take action in this regard there is not doubt that his followers would voice their full support. He has voiced his intent to reinstate torture, to the delight of those at his rally. There is little doubt that were Trump, at one of his rallies, to announce that all American Muslims should be sent to concentration camps, or that all undesirables should be sterilized, that his followers would endorse such actions with great enthusiasm and acclaim. The next step could be to go ahead and carry them out with the backing of his followers. The ground work has already been laid.

So the stage is set, as it was in Germany around 1932. Trump is confidant, with reason, that his base would condone murder or any other crime he might wish to commit. Should he actually go ahead and commit crimes such as those mentioned above, it appears that a good percentage of his base would voice its approval. We are at a tipping point. Will we choose to revert to those enduring values such as honesty, integrity, compassion, respect, decency, fairness and equality? Will we choose the high road or continue on the low road?