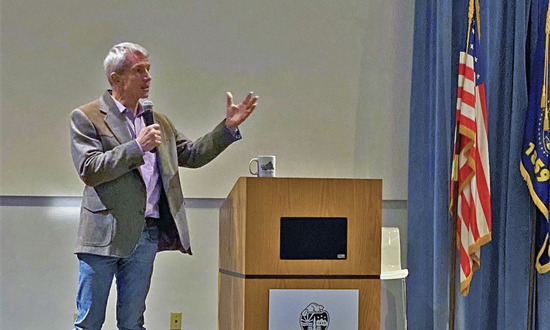 In what has been labeled an “unprecedented” move, the Chairpersons of five of the seven Democratic Central Committees in Congressional District 5 this week sent a letter to Congressman Kurt Schrader sharing their concerns, disappointment and sense of betrayal caused by Schrader being one of only two Democrats to vote against H.R. 1319, the American Rescue Plan of 2021. I was among those who signed the letter.
The five Central Committee chairs met in the days immediately following Schrader’s nay vote, at which time no word had been issued by the Congressman, or his staff, regarding his vote. The letter, which is included in its entirety at the end of this column, spelled out many of most critical benefits of H.R. 1319, and, in particular, those that would be of greatest impact to the residents and constituents in Schrader’s district.
I am proud that my fellow Democratic leaders took this critical moment in our nation’s efforts to help those in most need of assistance to overcome the physical, emotional, and economic impacts of the Covid 19 pandemic to assert our concerns and strongly urge Mr. Schrader to meet with us to explain his vote.

Since signing and sending our letter to the Congressman, several interviews have been conducted with Mr. Schrader and his responses have been that the bill, as it was presented in Congress was too “un-targeted,” that it included a $15-per-hour minimum wage package, which he claimed was untimely during the pandemic, and that it was presented as a take-it-or-leave-it, all-inclusive package, and that he and his fellow legislators weren’t given enough time to study it.
Of course, we all know that H.R. 1319 passed despite his vote and then went to the Senate where it passed, with amendments, along party lines. On Wednesday morning, March 10, the revised bill with the Senate’s amendments went back to the House where it passed, with Schrader voting yes. I saw one interview in which Rep. Schrader said that the changes made by the Senate made the bill more palatable for him.
In this whole process, Democrats, particularly those whose leanings are most progressive, have called for the Congressman’s head. Unfortunately for Mr. Schrader, his nay vote on H.R. 1319 came shortly after he, in an “unprecedented” (there’s that word again) case of foot-in-mouth disease compared the impeachment hearings of D.J. Trump to lynchings, a statement for which he has abjectly apologized.
However, no apology has come for his nay vote, or even an explanation as to what the Senate did to the bill that made it more palatable – less “un-targeted,” less all inclusive. Maybe it was simply that the time following the House’s first passage of H.R. 1319 and the Senate’s relatively quick passage was enough for Schrader to understand that this bill is really good for the people in his district.
So, yes, Democrats from urban Clackamas and Marion Counties, and in the rural parts of those counties as well as in Polk, Lincoln and Tillamook Counties are upset.
But, before we throw the baby out with the bath water, let’s consider our alternatives. Schrader’s District 5 seat is one we Democrats have hung on to for 23 years. Not because it is a hotbed of progressive liberals, but because the two Democratic candidates that have held this seat for all these years – Kurt Schrader and Darlene Hooley – recognized that to continue to win elections in what Schrader rightly calls a “Purple” district, the candidate must do what American democracy demands – compromise. Makes me wonder how much this was on the Congressman’s mind when he voted “no” instead of his list of issues with the bill.
Although Kurt Schrader has more times than I can count caused me to slap myself in the forehead and say, “Yikes, doesn’t he know he’s a Democrat,” he has managed to reach across the aisle and work to pass bills that have benefitted his constituents. Not just his Democratic constituents, but all of his constituents in Congressional District 5.
While he was dancing to the tune of his unfortunate nay vote on H.R. 1319 this week, his opponent in the 2020 election – Amy Courser – was dancing in the streets of Orlando, FL celebrating the fact that D.J. Trump was going to speak at the Conservative Political Action Conference C.P.A.C. she was attending. If we think we’re going to get anything close to constituent representation from Curser, who is already campaigning for 2022 and who lost to Schrader in 2020 by less than 7 percentage points, we’d better think again.

Here’s a link to the letter the five county Democrat organizations sent to Rep. Schrader – https://www.tillamookcountypioneer.net/five-county-democratic-party-chairs-say-schrader-betrayed-constituents-with-opposition-to-american-rescue-plan-urge-him-support-bill-now-before-the-house/