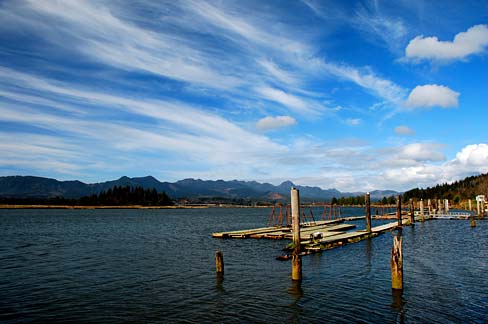 By Stevie Stephens Burden, former Wheeler Mayor
This is a plea for anyone reading this who lives in north Tillamook County to take action to address a critical issue before it is too late.

I am writing because I wanted let all of you who live, work, or vote in Wheeler and those of you who have struggled to find housing, that the Wheeler City Council is holding a meeting on Tuesday November 16th to discuss and hopefully make the right decision concerning the development along our waterfront.

Over the years we have prepared for the eventual development of this land and have tried many things to insure that what happens there is the best thing for the city and community. We created a vision and comprehensive plan that put what our community wants into policy. We tried multiple times for grants and funding to create a park but we’re denied every time. We are not big enough to justify the costs. We’ve worked on zoning and with the developer. This has gone on for years.

Wheeler is now in the position of deciding between a fish processing facilities (and all the smell, noise, and commercial traffic that comes with them) or a well planned housing development that our area needs.

During my tenure as Mayor (16 years all told) we worked with the county, state, and other cities to address the severe lack of housing in our county, which we have known for years is abysmal.

The problem is that there is a small group of people who have been very vocal in their opposition to a housing development because they don’t want their views impacted and as a result their property values. Or so their stories go. 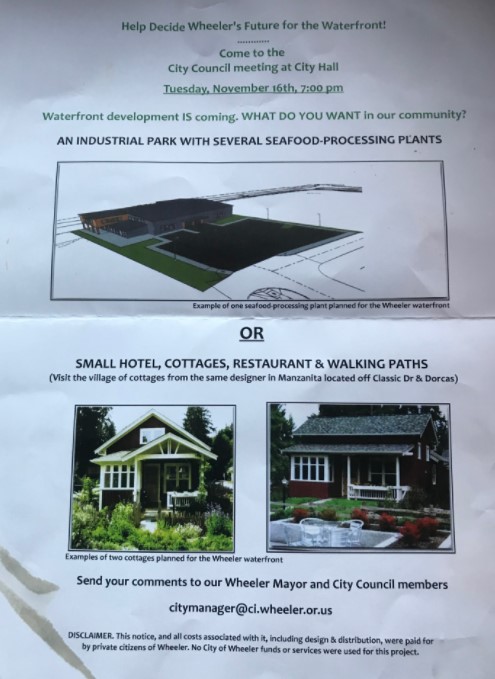 A couple of things to keep in mind. The building of a fish processing plant is an outright approved use of the waterfront land, so in the end the city can not stop this piece of PRIVATE property from being used to process fish. The owner must only meet the criteria of the land use laws and can only be denied based on those laws and not personal preferences.

The development of the housing and commercial area is a legal conditional use of the property. That means it may be used for those purposes if the conditions outlined in the law are met.

There is no third choice of no development at all. And if our current City Council continues to try and enforce the nonexistent third choice we the citizens of Wheeler will be the ones who pay the price as it will result in legal action sooner or later. I do not believe that the city has the legal grounds to win in a court of law when the Council is not following due process. That will mean that we the citizens will foot the bill of both the court proceedings and the costs of losing a law suit.

Wheeler as a community and city needs to think about it’s future. Do we want an unsightly fish processing center that will be accompanied by commercial and industrial traffic not to mention the smell. While such an endeavor would bring some financial benefit to the city there are many consequences most of which are negative in nature.

A modest housing and commercial development however can bring solutions to very real and serious problems in our city. For every house built the city receives a connection fee that goes to our community so in addition to the increase in tax revenues this development would also increase commercial and retail finances. It would result in thousands and thousands of dollars that would be used for the improvement and maintenance of our community infrastructure. We would likely see increased funding for streets, sewers, staffing, and city hall improvements.

I have studied this issue in depth for years and I believe our community is shooting itself in the foot if we don’t support this development.