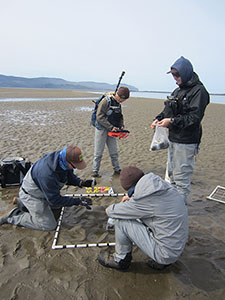 Residents and visitors to Tillamook Bay will see ODFW biologists on the sand and in the bay through October conducting new surveys of bay clams and estuary habitat.

The biologists are with ODFW’s SEACOR (Shellfish and Estuarine Assessment of Coastal Oregon) program. SEACOR periodically surveys bay clam populations and estuary habitat in all of Oregon’s major coastal bays. This year, the new work is focused on Tillamook Bay.

Surveys gather information on where recreationally important species (butter, cockle, gaper, and littleneck clams) are located, abundance, and preferred habitat type for each species. Surveys also describe other shellfish in the estuaries, including purple varnish clams and juvenile Dungeness crabs.

This data is used to produce detailed maps of productive clamming areas that are highly useful to recreational clammers. Maps provide information on the location and abundance of recreationally targeted species so clammers can maximize efficiency on the tide flats.

Surveys also document changes to species and their habitats, adding to a growing database of information on the health of Oregon’s bay clams and estuaries.


SEACOR biologists are particularly busy during low tides. They follow GPS coordinates to specific sites on the tide flats, lay out quadrats, record habitat information, identify the presence of gaper or butter clams by their siphon shows on the tide flat surface, and rake the sand or mud to a depth of six inches looking for cockle or littleneck clams. Some sites are surveyed in greater detail by hand digging or “megacoring” which pumps out sediment, collecting clams buried deeper below the surface. SEACOR biologists megacore sites in shallow areas of the bay and work with contracted divers to conduct megacoring surveys in the subtidal zone.

Bay clammers can get detailed maps for Alsea, Coos, Netarts, Siletz, Tillamook and Yaquina bays on myodfw.com or check the SEACOR page for more information on the project.