On Tuesday August 9th, the Tillamook County Pioneer received information about a Netarts Bay sewage spill that had occurred on August 5th and expected to receive a press release about the spill and closures. It was a full week since the incident and no press release or details had been released  only rumors and brief information from Friends of Netarts Bay WEBS about the cancellation of their clamming excursion had been received. Yesterday, August 12th the Pioneer sent a series of questions to the agencies involved. Below are answers to our questions and the following brief press release was issued by the Oregon Department of Fish and Wildlife:

(August 12, 2022) NEWPORT, Ore – ODFW is advising recreational crabbers and clammers of a raw sewage spill in Netarts Bay that occurred Aug. 5 near the Netarts boat launch. The Oregon Department of Agriculture closed the bay to commercial oyster harvesting on Aug. 6. Expected reopening is Aug. 26. Recreational clammers and crabbers are advised the water may be contaminated until that date. 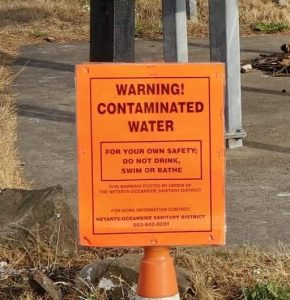 The Netarts Oceanside Sanitary District had posted these signs (at left) warning of contaminated water. Signage posted earlier in the week by ODFW read “CLOSED TO CLAMMING” 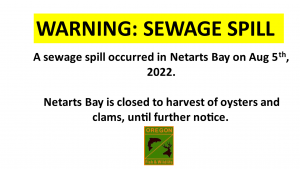 When our Pioneer photographer Don Backman took these photos of the signage on Thursday August 11th, he noted that there were clammers out. Low tides this weekend found hundreds of clammers on Netarts Bay not heeding the signage and warnings.

How did this happen? And from historical information that I’ve heard, it’s happened before. Can you relate past incidents?
•DEQ: A pipe fitting broke at the Netarts Oceanside Sanitary District’s (NOSD) pump station on August 5, 2022 at 1 am, activating their emergency response plan. An alarm went off and within 30 minutes, the District stopped the spill and proceeded to work to clean up what they could and post signs near the pump station. This facility has not had a spill since 2016. In that case no waterways were affected.

•NOSD: The NOSD Superintendent is not available; statement from NOSD board chair – NOSD will start collecting and compiling requested information to have early next week.

Why did it take 5+ days to notify the public of the closure/raw sewage spill? And why has there not been any communication or transparency about the situation?
•ODA: The Oregon Department of Agriculture (ODA) notified commercial licenses on August 6, 2022, of an immediate twenty-one (21) day closure in Netarts Bay as authorized under ORS 622.180. The twenty-one (21) day closure is in compliance with the National Shellfish Sanitation Program (NSSP) 2019 Revisions adopted in the Model Ordinance subject to 21 CFR part 113 or 114.
•ODFW: ODFW was notified late Wednesday August 10th of the spill. Out of an abundance of caution, particularly with weekend low tides and the Tillamook County Fair expected to bring more shellfishers, we decided to close the recreational clamming in Netarts Bay on Wednesday night and the recreational crabbing Thursday night. We prepared a news release on that today, however, with no official Shellfish Public Health Advisory issued by ODA, we are replacing the closure signs with advisory signs and issued an alert regarding the spill to recreational shellfishers.
•All: The public was not notified of the spill in a timely manner. We are working together to understand where gaps in notification and coordination occurred internally to ensure this does not happen again.

Amount of spill?
•DEQ: The initial report to the Oregon Emergency Response System was 5,000 gallons, but the District may have revised numbers on this.

Is the bay being tested daily? By what agency or agencies? Water contact/recreation?
•DEQ: The amount spilled that actually reached the water is quite small relative to the body of water and is unlikely to present a risk to the environment.

•OHA: OHA would consider issuing a recreational use advisory for water contact, similar to those it issues for water contact at Oregon beaches due to fecal bacteria and at inland water bodies due to cyanobacteria (harmful algae) blooms. However, OHA would need to review data from water samples, collected by our state natural resource agency partners, showing laboratory-confirmed contamination of the water that is above recreational guideline values before deciding whether to issue such an advisory.

Closed to clamming/oyster farming – What about crab? Fish? Other impacts?
•ODA: ODA’s authorities under ORS 622.180 pertains to molluscan shellfish.
•ODFW: We have not seen direct impacts (mortality) to fish or crabs.
EDITOR’S NOTE: The bay is not closed to clamming or crabbing – ODFW issued an advisory about the raw sewage spill, and with the absence of any water testing that shows elevated parts-per-million of fecal matter or other contaminants the Oregon Health Authority does not issue a closure. The bay is closed to oyster farming according to the the Nationals Shellfish Sanitation Program requirements.

What is NOSD doing to ensure that this doesn’t happen again?
•DEQ: DEQ’s National Pollution Elimination Discharge permit requires NOSD to create and follow their Emergency Response Plan. As a part of DEQ’s sanitary sewer overflow review process, DEQ will provide a thorough assessment of what happened and provide NOSD feedback for any potential improvements needed. After this preliminary review, it appears that NOSD followed their Emergency Response Plan. The pipe fitting that failed has since been removed and sufficiently repaired.
•NOSD: NOSD Superintendent not available; statement from board chair – NOSD will start collecting and compiling requested information early next week.

Could you provide information about system capacity, upgrades? Does the system become “overloaded” during the peak summer season?
•DEQ:  DEQ did not see an indication that this spill was related to a capacity problem.
•NOSD: NOSD Superintendent not available; statement from board chair – I think I can say right now with some assurance, that the system has sufficient capacity and the system has not and will not become “overloaded” during the peak summer season.