From Kate J. Skinner, ODF Tillamook District Forester
Now that the smoke is clearing from Pike Road Fire, the Oregon Department of Forestry would like to thank the community for their support to the firefighting efforts. The fire began late Monday, September 7th. After the initial attack efforts and knowing there would be an extended attack at Pike Road, our office reached out for assistance for meals, heavy equipment and logistics and the community responded on all fronts immediately.
Over 150 firefighters had to be fed for day and night shifts and 10 restaurants and stores provided meals that met calorie requirements, prepackaged, and ready to go to the line. Many of those vendors donated the meals which we know was a huge sacrifice in the current economic environment.
When our office called on fire crews, fallers, loggers and road builders for equipment to assist, our phone rang off the hook. At one point there was over 30 pieces of equipment working on the fire from 13 companies building line and cutting trees for fire breaks. Due to the extreme weather conditions, the woods were closed to operations which allowed equipment operators to work on fires.
We are now committed to getting everyone back to work as soon weather allows for safe work in the forest. “We are meeting this morning on closures and getting the weather forecast. We’ll definitely have information back out today,” added Tillamook District Forester Kate Skinner.

It is less known that while Pike Road Fire was growing, there were two other fires ODF responded to behind the Blimp Base and MP 7 on Highway 6. The same operators and crews moved to assist ODF firefighters and South Fork Inmate crews on those responses. Both fires had potential for growth and they were controlled quickly and put into patrol and monitoring status. 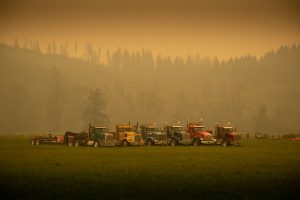 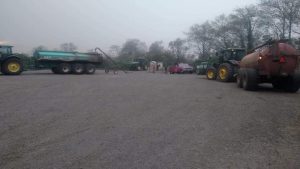 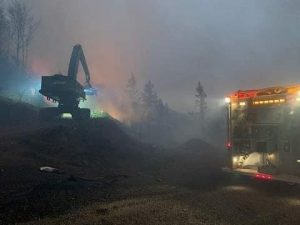 There is still work to do to extinguish the Pike Road Fire but an even larger effort is needed across Oregon.
ODF has established a dedicated phone line and email address for members of the public that are reaching out to offer resources and assistance with Oregon’s wildland fire fighting efforts statewide.
ODF will monitor and respond to incoming calls and messages at regular intervals on a daily basis.
Phone: 503-945-7207
Email: ODF_DL_2020Resourcehelpline@oregon.gov
We ask that callers and emails leave the following information so they can be reached for response by ODF.
 Name
 Type of Resource/Assistance
 Contact Phone Number
 Contact Email
You can call or email to let them know availability and equipment to provide. ODF again wants to thank you for the support from citizens of Tillamook County.