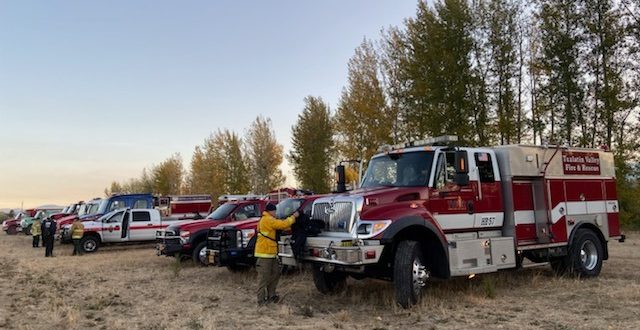 Nine strike teams, represented by Assistant Chief Les Hallman of Tualatin Valley Fire & Rescue, are responding to the Kincade Fire in Sonoma County. As of this morning, the 66,231-acre fire had forced the evacuation of approximately 180,000 persons. Crews have been assigned this morning to support efforts to mitigate structure threats and construct control lines.
“It’s very humbling to be a part of a large scale mobilization of resources and see how quickly Oregon can respond in a time of need,” said State Fire Marshal Jim Walker. “To assemble 75 fire engines and 271 firefighters in a matter of hours to respond to our neighbors in need is extraordinary. I appreciate the more than 60 fire agencies that answered the call, the work of our OSFM staff and Office of Emergency Management in assembling the response, and Chief Hallman of Tualatin Valley Fire & Rescue and Chief Ruiz-Temple of OSFM in providing support for our firefighters while deployed to California. I truly appreciate all that you do.”
The deployment of the Oregon resources could last as long as 16 days.