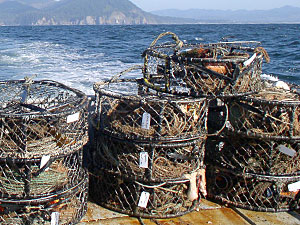 NEWPORT, Ore.—Two men caught setting stolen crab traps in Cape Falcon Marine Reserve of the North Oregon coast await trial following a joint effort of citizen reporting and solid detective work.
Bob Browning has fished Oregon waters all his life. He started fishing off the Garibaldi dock with his family when he was five years old. When he saw a strange object bobbing on the ocean surface, he pointed it out to his client, Dr. Sarah Henkel. Henkel, a researcher with the Oregon State University Marine Program, was collecting data for her latest project: The feeding ecology of Dungeness crab in a reef area. She had hired Browning and The Lady Lee on April 3, 2019 to take her out to the Cape Falcon Marine Reserve for the research project.
Henkel squinted to get a better look. It wasn’t a bird. Even through binoculars, neither the researcher nor the boat captain could identify the small black thing bobbing on the water’s surface.  It definitely didn’t look like the bright orange and white surface buoys that marked her research beacons. Browning steered The Lady Lee in for a closer look.

Browning reached down and pulled at the object. It was a black bait bag, about the size of his fist. Inside were two pieces of foam to keep it afloat. But when he tried to pick it up, there was resistance. And a long cord. Browning threaded the rope through his hydraulic lift and started the motor. When a crab pot broke the surface of the water, they knew there was trouble. The line continued. Another crab pot rose from the depths. They reached for their phones to report it.

The Investigation
Oregon State Police Fish and Wildlife Sergeant Todd Thompson was on shift that day and took the call. He instructed them to pull the string of crab pots and bring them to the dock. The nearly invisible float marked a string of 19 pots, all with crabs in them. Even in areas where crabbing is legal, each pot must have a surface marker. But these were secretly placed in the center of the 12-square mile marine reserve, where commercial fishing is strictly prohibited.

Trooper Jim O’Connor was surprised when he saw the string of crab pots on the dock that afternoon. And for good reason. Commercial crabbers generally paint all their pots the same color. These pots were a variety of colors.

“It looked like a rainbow of crab pots sitting on the dock,” he said, “They were all different colors.”

Not only were the pots different colors, but they were set with a variety of bait styles—another deviation from commercial crabbers, who set all their traps the same way. Trooper O’Connor concluded that the pots were stolen property and began investigating recent reports of stolen crab pots. One by one commercial crabbers stopped by the OSP office to identify and claim their gear.

“All in all we had seven different commercial crabbers between Astoria and Newport who’s stolen pots showed up in this string,” he said, “We found eight pots that had been stolen from the same person.”

Everyone thought that would be the end of it. The poacher and thief would surely never claim the pots, and likely not set gear in that area again. Still, Trooper O’Connor started tracking boats traveling in and near the marine reserve. He took notes and paid attention. Then he began an official investigation.

Oregon has five marine reserves devoted to conservation and research, where no fishing or crabbing is allowed. Click to enlarge

Marine reserves protect habitat from human influence and create a place for marine life to grow and mature, according to ODFW Marine Reserves Program Leader Cristen Don. With little fishing pressure, ecosystems have an opportunity to regenerate.

A Break in the Case
In May of 2019, Browning received a call from a buddy on another boat.

“You won’t believe what just happened,” he said to Browning, “I’m going through the marine reserve, and I ran over a line attached to two strings of crab pots!” Browning asked for the location. It matched where he and Dr. Henkel had been the month before.

Browning reacted quickly. “Don’t say another word,” he told his friend. “I’ll be right there. Don’t go anywhere and don’t tell anyone.”

Browning immediately called the Turn In Poachers (TIP) Line. He reported what his friend found, then started his boat and headed out to the reserve. Senior Trooper Dave Herman, Trooper O’Connor and a member of the Coast Guard were close behind him aboard an OSP small boat.

When they arrived, O’Connor pulled up several crab pots. He removed a few legal-sized crabs from each, discreetly marked them, then placed them back in the pots. They lowered the traps back into the water, then headed back to shore. The trooper knew he was going to have a long night at the fish processing plant, waiting for the marked crabs to show up. If they showed up.

Several hours later, his patience paid off. The marked crabs came through the processing line, and they knew which boat had dropped them off. It was one of several O’Connor had been tracking around the marine reserve area.

Troopers served several search warrants on the suspect over the following months, which solidified the case. Eventually they tracked him back to the marine reserve.

ODFW Director, Curt Melcher, describes the operation as a success in preserving fish and marine habitat.

“We and our partners at OSP rely on information from non-enforcement personnel and this incident shows the important role that citizens play in our efforts to protect the resource,” he said. “Moreover, illegal fishing activity negatively impacts participants who are following the rules.”

O’Connor credits the OSU researcher and boat captain with solving this crime.

“We would never have found those crab pots. This is a perfect example of the public working with law enforcement to identify and report a crime,” he said.

Browning is quick to credit the state trooper.

The Stop Poaching Campaign educates the public on how to recognize and report poaching. This campaign is a collaboration among hunters, conservationists, land owners and recreationists. Our goal is to increase reporting of wildlife crimes through the TIP Line, increase detection by increasing the number of OSP Fish and Wildlife Troopers and increase prosecution. This campaign helps to protect and enhance Oregon’s fish and wildlife and their habitat for the enjoyment of present and future generations. Contact campaign coordinator Yvonne Shaw for more information. Yvonne.l.Shaw@state.or.us.