Over time, populations across Oregon change. Some communities grow with more year-round residents while others lose population. And so, to ensure that everyone is equally represented in our Oregon legislature and in Congressional districts, every ten years, we go through a process of reviewing and adjusting boundaries. Having proper information for this task is the primary reason for our once-a-decade census.

Redistricting is inherently political. Individual legislators are of course concerned about how changes may affect their personal future. Political parties vie to maintain or increase their advantage. Cities and counties seek more representation and with it, more influence.

But redistricting is about more than partisan politics. It is about how people in our diverse communities are best represented.

We presently have four districts in the Oregon House that stretch primarily along our coast. But imagine for a moment if Florence were paired with Eugene, Newport and Toledo with Corvallis, Lincoln City with Salem and Tillamook with McMinnville. We’d essentially have more Valley dominated districts and coastal voices would be diminished. To some degree that is the case now with Sheridan, Grand Ronde, and Falls City which were added to our House District ten years ago. I visit them and advocate for them as much as I can. But it is an hour from the coast to Falls City in Polk County and I have to drive out of the district through Dallas to get there. They are frustrated. They don’t feel they belong in a “coastal” district and I understand that.

So redistricting is important. Let’s talk about how the process works, how decisions are made, and how you can watch or be involved. 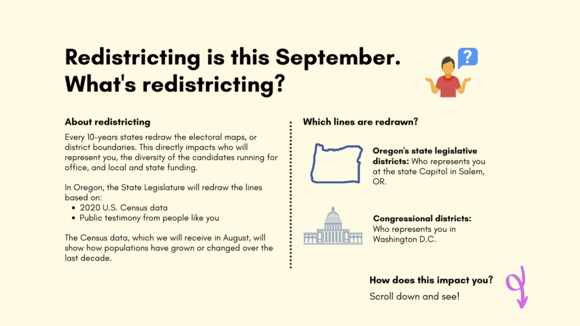 Like so many things in 2020-2021, redistricting is not working normally. The census is behind schedule and numbers we should have received in January will not be available until later in August.

Oregon has 60 House and 30 Senate districts. Each Senate district contains two House districts with House members serving two year terms and Senators four years. Oregon also has five congressional representatives in Washington DC.  But Oregon has grown. We now understand that increasing population will earn us a sixth congressional seat and redistricting will determine where that will be. The number of seats in Salem will remain unchanged. But the population in each House district will increase to roughly 70,000.

If the census confirms that population growth is centered in our larger urban cities, that means districts there will grow smaller and rural seats with less population density will grow geographically larger. And of course, it also means the number of representatives in our cities will increase with fewer for the rest of Oregon.

Redistricting for the Oregon legislature is governed by the Oregon Constitution (Article IV, Section 6) and by statute (ORS 188.010).

Essentially, the law says redistricting is managed by the legislature. If they fail to complete the task, or if the Governor vetoes the legislative plan, the job of drawing legislative boundaries goes to the Secretary of State and congressional maps to the Courts. Legislative redistricting plans produced either by lawmakers or the Secretary of State are also subject to legal challenge in the Oregon Supreme Court.

In a normal year, this process would have been completed during the 2021 legislative session that just concluded. But without census data, the Oregon Supreme Court granted lawmakers the ability to extend normal deadlines, giving the Legislature until September 27 to approve its own set of legislative and congressional maps. If we fail to find agreement, the Secretary of State will have until October 18 to build her own plan for state House and Senate districts.

While lawmakers have the best, detailed information about the people and characteristics of the districts they represent, allowing legislators to draw legislative lines leaves them open to conflict of interest charges – that they are able to choose their voters instead of vice-versa.

Ten years ago, the legislature successfully completed redistricting. And of note, ten years ago, there were an equal number of Democrats and Republicans in the Oregon House which prevented one party or the other from dominating the process. The primary work of redistricting is done by Redistricting Committees. Because we have more democrats in the legislature, most committees have a democratic majority. The Senate Redistricting Committee has more democrats, but the House committee is evenly split with a Republican and a Democratic co-chair.

Only twice in the past 100 years has the legislative plan been adopted. Historically the job ends up with the Secretary of State. In anticipation of that possibility, Secretary Fagan has announced she will form a “People’s Commission” to offer thoughts on what maps should look like. You can learn more or apply here.

Washington, California, and Idaho have all adopted a commission model for redistricting, but a campaign last year that would have asked Oregon voters to approve such a system failed to gather enough signatures.

Once redistricting is complete, the new districts will be in effect for the 2022 elections.

Partisanship, real or perceived, is inherent in redistricting when it is under the control of a partisan legislature. But the process does operate under specific rules and restrictions.

Oregon’s specific criteria are spelled out in ORS 188.010, passed in 1979. There are four provisions:

If we begin with our own House District 10, and a presumption that we need to grow geographically larger, the question becomes, do we stretch further north, south, or east? Asked another way, what cities constitute a more appropriate “community of interest”? Among Tillamook, Newport, Florence, Sheridan, and Dallas, who has more in common culturally or economically? Who has shared service delivery, media, and common interest? 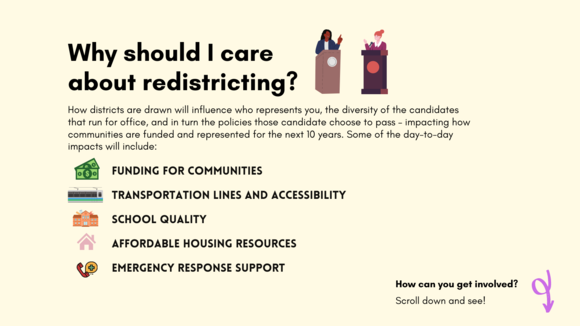 Legislative Redistricting Committees held a series of public hearings in March and April for each of our current congressional districts. I appeared and argued in favor of “coastal integrity” – not dividing up coastal communities or diluting them into valley districts. You can hear my comments at the ten minute mark.

Once census data is available, there will be another opportunity for you to testify. Hearings are scheduled around the state but you can appear at any, in person or by computer, and can submit written testimony.

For more information and details on how to testify, check the Legislative Redistricting webpages.

Following the hearings, Committees will make final recommendations which are scheduled to be voted on by the legislature in a Special Session tentatively scheduled for September 20.

The Oregon system is, I believe, better and fairer than most. We have not seen the kind of blatant gerrymandering sometimes evident in other states. But there is certainly room for improvement.

For an interesting overview of the process and suggestions for reform, you might want to review a 2012 report by the City Club of Portland. In it they cite Oregon advantages and disadvantages. 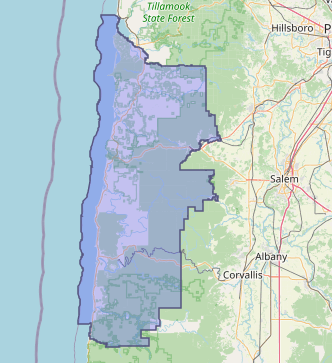 Our district currently ranges from the South Jetty of Tillamook Bay, and east along the southern Tillamook city limits, to Sheridan in Yamhill County, Falls City in Polk County, and includes all of Lincoln County except Yachats.

That’s probably more than you ever wanted to know about redistricting. But this is important stuff. It not only determines how you are represented, but also affects school quality, transportation, housing resources, and emergency support. I trust you found this detailed overview useful and may consider sending the committees a letter or signing up to testify.

Thanks so much for your interest.