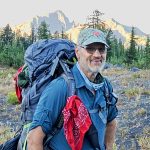 By Don Backman
Sitka Sedge State Natural Area is a relatively new State day-use area located between Sandlake and Whalen Island to the north, and Tierra Del Mar, Cape Kiwanda, and Pacific City to the south. For some reason, I have never hiked it. So, on Wednesday, January 20, 2021, I set out to take care of that omission.
The parking area only had a half dozen cars, so there was plenty of parking available. The website lists 26 parking sites. This fact should limit crowding. The trip was to be more of a photo expedition, so I was taking my tripod and heavier camera gear. There was no reason to carry the daypack and things normally needed when hiking up in the hills.

The Oregon State Parks webpage lists 3.5 miles of trail. That must be outdated because Travel Oregon and Grant McOmie report 4.5 miles, and Grant McOmie’s videos are great. The Beltz Dike trail connects the parking area to the two loops and the beach. The Estuary View Trail and Footbridge trail are on the north side and are closed due to storm damage, although the section following the beach is still open. The Kinickinick Woods Loop and Elk Knoll side trails are to the south. 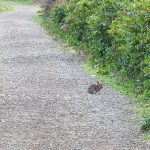 The sun was out at the start, and while there was a wintertime chill, a light jacket was all that was needed to keep warm enough. There was very little wind. It was perfect conditions for a late January hike on the beach. There were several people back in the parking area but no one on the trail. The gravel crunched loudly underfoot. The only other sounds were the quiet murmuring of ducks, the rumbling surf, and the distant excited voices of a few kids. Add to that the passing cars on the highway, but the sound of the surf and the thick trees soon covered the road noises.
The trail immediately follows the Beltz Dike which runs west between the wetland area and the estuary. Both sides held many ducks and other water birds. Several Blue Herons were hanging out looking for a seafood snack. Other than the birds, I had this section entirely to myself. There are some estuary views along here and the still water caught the reflections of clouds. This might be a nice place for an early morning or evening sky reflection photo. 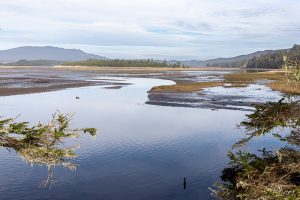 The trail made a sharp turn to the right and continued to the junction with the Estuary View Trail. Unfortunately, the Estuary View trail was blocked off due to storm damage. The gravel section ended here, and the real hiking trail began. The trail quickly led to another junction. This was where I met the first hikers, a slightly older couple who were returning to the parking area from their hike. We put masks on and kept our distance, exchanging a few words about it being a great day to get out on a trail. Someone had lost a shoe that had been set on top of a sign. Trail etiquette is to put lost items on signs or in places next to the trail where they are easily visible. I once lost a glove on the Kilchis Reserve trail, and someone put it on the sign where I found it the next day.
Here’s a video of Don’s Sitka Sedge hike:

Beach pines closed in around the trail which was dry and easy to walk on, with only slight hills. Eventually, the trail reached another junction. This one had a piece of wood lying on the ground next to it, with blue letters spelling “beach” and an arrow pointing to a narrow side trail. I chose to continue on the main trail. Just a few feet later the main trail forked again. The one heading toward the beach was blocked by a large pond. I took the other fork and continued north. At this point, the trail transitioned into some dune walking which made for a little harder going for a short way. This trail eventually reached a junction.
The trail continuing farther north was blocked with a trail closed sign, and a yellow triangular sign indicated that the area was also closed due to bird nesting in the spring. Just around the corner of the other fork, the remaining trail was closed to storm damage. This meant backtracking to the junction where the trail was blocked by the pond.
The narrow side trail with the beach sign led up on a short dune between two large ponds where you can look down on a trail sign sticking up out of the water. That way was out. Fortunately, it was easy to follow the side trail, although it was tight with limbs from the trees. After skirting the southern pond I met the second group of people. They were trying to find a way around the pond so I showed them the trail and assured them it wasn’t very far.
Ever since leaving the Beltz Dike, the trail had been a brown and green tunnel and this continued. The side trail rejoined the main trail leading south but my goal was the beach. It took a little backtracking to find the trail people had been going through, and that one eventually reached the beach.


The sky was beginning to cloud up but it was still a pretty nice day. A long, wide expanse of empty sand greeted me and there were no people to be seen. Several crab boats were working crab pots out on the ocean. One boat was closer than the others and looked like it was going to come in close, which would make a nice photo. However, the first goal was to reach the beach itself. The recent king tides and high surf had washed away some of the dunes and left a drop off all along the edge which looked to make getting down difficult. Luckily, after finding and negotiating a short dropoff, I made it down. Getting back up looked like it would be a bit harder, though.
This was a new section of beach to me. A few tire tracks indicated a couple of vehicles had driven by. There were also a few footprints but not many. After quickly finding landmarks for the way back, I decided to hike up northward toward Sand Lake.
The crab boat had continued in closer so I swapped lenses and waited for the right waves. The midday light wasn’t great for landscape style photos, but after getting a few shots that looked OK, it was time to head to the northern tip of the beach. The walking was easy as the sand was somewhat firm. It’s a great walk. The only caution is that the undercut dunes created a line of vertical sand walls that would have been unclimbable in many areas so one would want to be careful along there during a storm or high waves.
An SUV met me on its way back down the beach. The occupants were the only humans I had seen on the way up the spit. At the tip, I took the time to create a 55 shot panorama ranging from Cape Lookout back to the estuary. It is included in the video.
The hike back down the beach was relatively uneventful, except for a sneaker wave. There had been several but this one was the largest. It came ashore quietly and ran up and over the SUV’s tracks and forced a cautionary detour higher up the beach.
Finally, three other people appeared down the beach, a woman with two younger children. They were the only other people walking on the beach the entire time. The kids were enjoying themselves. One ran up on the dunes so I knew there was an easier way back up off the beach.
From that point, the main trail led south where there was another beach assess trail. The trees on the southern portion of the trail were taller and the trail more open. The main trail then curved left and eventually started northward again.
The Elk Knoll side trail leads out to a raised knoll viewing area about one-half of the way back up northward. This is a raised mound on the east side of the loop with a bench to sit on at the top that offers a good view of the wetland area. There were no elk, just the sound of ducks and a croak of a heron which took off and flew to another hunting spot.
There is a schoolmarm tree not far from where the Elk Knoll trail joins the main trail. A schoolmarm is a tree with a damaged or missing top that has multiple limbs which have taken its place, sometimes resembling the arms of an octopus. This one is much smaller than the original octopus tree, which was crafted by native Americans into a ceremonial site, but young kids might enjoy seeing a baby octopus tree. The rest of the trail was uneventful and was highlighted by three small rabbits hanging out on the trail. They let me walk up close before going off into the brush.

The entire hike was 5.2 miles and was nearly flat. The trails were in great shape and easily passable. The only areas of note were the closed trails and the pond that caused a detour. All in all, it was an excellent outing. The beach is well worth the hike over to it.
I highly recommend Sitka Sedge for those wanting to get out for some exercise. While the trail is under the green tunnel and doesn’t have the kind of expansive views that attract tourists, it is still a great place for a hike. Having a park host across the road should help maintain vehicle security. Plus, the limited parking should keep crowding to a minimum.
Sitka Sedge was a success. However, it took so long that I was unable to hike Whalen Island as intended. That is little loss as now I get to hike it another day!