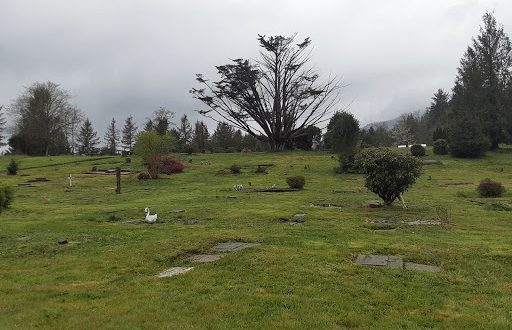 By Romy Carver
The Bay City Oddfellows Cemetery is a very special place to me. As a kid, when things got rocky at home, I’d walk to the cemetery to sort my thoughts. I spent hours there alone. To some people this might seem odd, but for me it was a great thinking place. One day some grazing deer were just a few feet from me and I sat quietly as we watched each other.
My parents are now both buried in that cemetery, along with my half brother. I also know some local history about that cemetery, and it’s a very sacred place to me. I still sometimes go there to think, but these days, it’s mostly stopping for a couple minutes on my way home in my car for a quick sanity break and mental reset.

When I heard through a racial and social equity group that there was a cemetery clean up happening there today, I knew I had to go. I haven’t made it down there in a while and I’m sure the weeds have been having a heyday. When I got up this morning, I had second thoughts. I had quite a few reasons I no longer felt like it. I have a wrenched neck that is giving me trouble. The kids had changed their minds about going. It was raining. I was feeling lazy and wanted some down time. And I didn’t really have time to make coffee.
However, I’d said I’d be there and I hate being a flake, so I grabbed some bottled tea, took ibuprofen, found my raincoat and some gardening tools, and off I went.
The event went from 9am-1pm, and it was almost 11:30 by the time I got there. My heart sank when I pulled up and saw only one other car. But a promise is a promise, and I put on my leather gloves, grabbed my gear and headed over to an older couple that was attacking a bunch of brambles with a shovel and rake.

I asked them where I was supposed to be and they said to go down the hill to register. I headed over the rise and suddenly saw over a dozen cars! The hill was swarming with volunteers. There was a big truck and trailer pulled up that was being filled with branches, weeds, and debris.
I momentarily forgot about the rain as tears filled my eyes. As I always do when I walk down that hill, I glanced to the left at the graves of my parents and brother, and there were four people hunched over, pulling weeds and tenderly caring for their graves. I was trying to wipe away the tears that were now spilling down my cheeks as a woman walked up the path to greet me. Her name is Lisa Sears, and I learned that the group at my family’s graves had driven all the way from Corvallis to help with this clean up. I went to thank them. I wanted to ask if I could take their picture, but they looked busy and I was feeling uncharacteristically shy.

Lisa organized this event through SOLVE and she has created a group called Tillamook County Cemetery Conservation. She told me about a substance called D2, which is approved by Oregon State University, to clean and restore headstones. Lisa’s group will be fundraising to get more D2 for their ongoing efforts. Lisa can be reached at 503-801-3101 or via email at tccemeterygroup@gmail.com. I learned today about “perpetual” gravesites. Apparently, the newer flat area of the cemetery is perpetual, which means that the cemetery cares for and maintains the graves. But most of the cemetery is not perpetual, which means that the families are responsible to care for the graves. Most people don’t know this and many people don’t take care of them.

As I created a modest pile of weeds from a nearby plot, my mind went over so many memories of growing up. On sunny days, my friends and I would cut through the cemetery to the corner grocery with pockets full of coins, returning with pixie sticks and jolly ranchers. We’d stop to take a drink at the little spigot halfway up the gravel path. I thought back to those days, walking down the road popping tar bubbles with our sandals. I remember as a kid being excited to discover the grave of the granddaughter of Chief Kilchis, which I believe fueled my early interest in local history. I was struck by just how entwined that little cemetery is in so many of my childhood memories.
I remembered standing there as my dad’s ashes were buried, and the letter to him that I slipped into his ashes. I remember my first attempts at caring for the graves. I had put several jars of my dad’s tumbled rocks on his grave, not realizing that without landscape fabric the rocks would gradually sink into the ground. Years later, I spent hours with a trowel, digging them back out. I remember back in the late 90’s tending my dad’s grave as my mom sat there and we talked; then in 2000, watching her ashes be placed alongside him. And more recently, I have taken my grandkids through that cemetery and told them the stories, about the big tree, and about the various people who are buried there, because I don’t want any of it to be forgotten. I still like to walk to the cemetery.
As I worked, I forgot completely about the rain. I became focused on watching a headstone emerge from the weeds and in wiping off the lichens. I felt immersed in history and honored to be there. I couldn’t be more glad that I went today. I will be connecting with Lisa next week and will be promoting her efforts to restore our local cemeteries and I hope others will too. It’s been many years since that cemetery looked as nice as it now does. 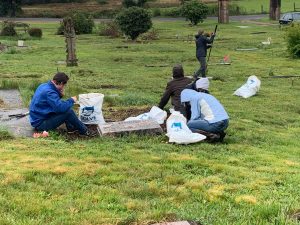 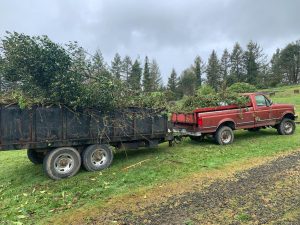 As we were wrapping up, volunteers gathered plastic SOLVE bags full of debris, the truck and trailer were overflowing with weeds and branches, and folks headed to their cars. A hearse pulled in and a canopy was being set up for a graveside service. I couldn’t help but to feel proud of how nice it would look for that service.