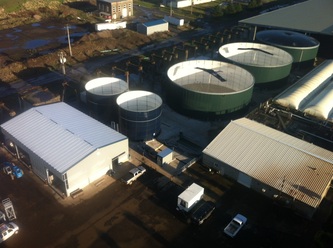 By Laura Swanson
It was early Monday morning, July 22nd when Port of Tillamook employees discovered that the digester, leased from the Port by Tillamook BioGas, a part of BioGas Corp., and Regenis is the third-party operator, was leaking liquid byproduct. The POTB employees worked quickly to set up barriers and contain the spilled liquid. The amount of liquid released is undetermined at this time, and there have been no closures or restrictions, awaiting test results. The Port of Tillamook Bay is six miles from Tillamook Bay. The POTB’s stormwater drainage system, into which some of this liquid did enter, has containment and then releases into the headwaters of Anderson Creek, which does flow into Tillamook Bay. “This was not raw manure; it’s some of the liquid byproduct of the digester’s process,” said Michele Bradley, Port of Tillamook Bay manager. “The employees notified me of the spill and I immediately notified DEQ and other authorities as directed by our permit.”

The lease for BioGas to operate the digester was finalized earlier this year, and the operator, Regenis, did not have the digester fully operational. The manure is held in the digester tank, which breaks down, creating biogas that generates electricity; the fiber and liquid byproducts are used for fertilizer and bedding. The process creates a waste with fewer pathogens. “That makes it less harmful than raw manure,” according the Port Manager Michele Bradley.
The Department of Environmental Quality and Department of Agriculture are analyzing water samples from the bay, from around the spill site, including Anderson Creek, a tributary of the Tillamook River. Test results were expected today Wednesday July 24th.
“The spill occurred sometime between Sunday evening and Monday morning,” said Bradley. “And we are looking at the cause, to determine exactly how it happened.”
Regenis is preparing a statement/press release that will be available as soon as test results are available; and DEQ is expecting to release a statement as well. The Pioneer will update this story as more details become available.