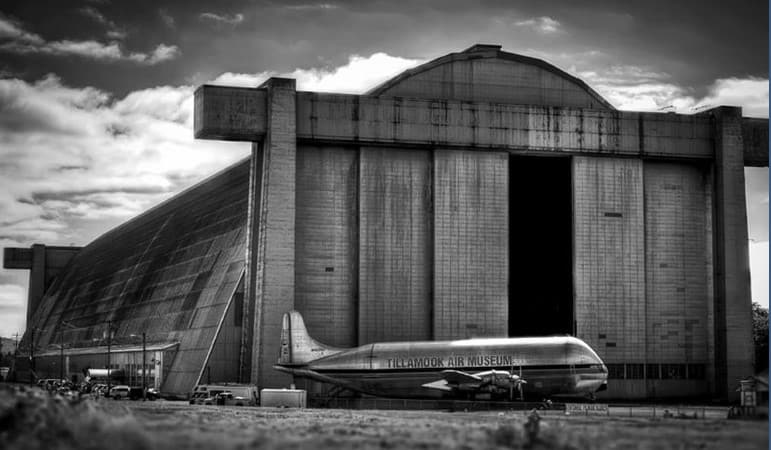 The Port of Tillamook Bay has signed a contract with Wood Research and Development LLC to do a thorough analysis of the vitality of Hangar B.

The last time an assessment of the building was completed was in 2011 as part of the FEMA projects being contemplated after the loss of the railroad in 2007. At that time, the study determined that the building needed a new roof among other structural improvements.

“We found out it was in a lot better shape than we thought it was going to be,” said Michele Bradley, General Manager at the Port of Tillamook Bay. “But at that time the Port Board was not willing to use almost half of the FEMA money to put into a building that didn’t bring us much revenue at all.

“Instead, what they did choose to do was address infrastructure – roads, water, wastewater, and buildings that brought revenue – and created spaces for manufacturing, offices, and warehousing to invest in future growth within the industrial park.”

Fast forward ten years and the POTB Commissioners agreed unanimously it was time to re-assess the building for safety and determine a path forward for either salvaging the Hangar or deconstructing it.

“The Port Board felt like because it is our building, it’s our tenants in there, it’s our museum in there, that it’s our responsibility to do this assessment,” Bradley said. “It feels like there is more of an urgency now just because we haven’t had any forward progress on it in several years.”

The Port has contracted with Wood Research and Development, LLC (WRD) that specializes in timber structures of various sizes and shapes all over the world. Their engineers are extensively trained and have a wealth of experience in innovative and creative ways to economically extend the life of timber structures, particularly those that others might discount as worthless or beyond reasonable repair.

“They analyze section by section and see where phased, laser-focused repairs can be made to the structure, so it may not entail full reconstruction,” said Bradley.

Following an extensive site inspection where several samples are taken from various points of the Hangar, WRD will prepare a report with their test results and provide recommendations for any repairs and further inspections, and present a logical path forward for management of the Hangar. The target areas selected for inspection will include areas that exhibit the most severe decay and the areas with the most severe leakage, as well as areas that appear to be in moderate to good condition. WRD will also be providing cost estimates for any structural repairs other than the roof.

The study is scheduled to be completed by the end of the year.

From there, Bradley said the Port Commissioners would look to work with the Friends of Tillamook Air Museum (FOTAM), a non-profit organization whose mission is to preserve and maintain Hangar B from Naval Air Station Tillamook. Bradley said depending on what they learn from the assessment, the Port doesn’t have the funds available to restore the building and would rely heavily on FOTAM to create and implement a strategic plan to save Hangar B, which would include investigating different funding options available.

Hangar B houses the Tillamook Air Museum and several other tenants including Stimson Lumber, Fat Head BBQ, Tilly Tots preschool, Jennifer Trost Pottery, and others. It is one of the last remaining WWII blimp hangars in existence, and the last one open to the public.

“The thing we always have to remember is that it was constructed 80 years ago in a wartime effort,” Bradley said. “It was built for a purpose and it served its purpose, but everything has a lifespan. None of us want to see it come down, but we have to be realistic in what we can and can’t do. A wooden structure living on the Oregon Coast has challenges, especially after this many decades of use.”

Bradley added that FOTAM was created by the Port of Tillamook Bay board in 2017 to help create a plan for the building and take some capacity off the Port.

“[Once the assessment is completed] we will collaborate to figure out the best way to come up with that large amount of funding,” Bradley said. “That process forward would all be defined based on the steps recommended by this consultant.”

For more information on the Friends of the Tillamook Air Museum, visit their website friendsoftillamookairmuseum.org.

The Port of Tillamook Bay serves as the core of the Tillamook region’s industrial economy. The port covers approximately 1,600 acres, including the Tillamook Municipal Airport, the Tillamook Air Museum and a 200-acre industrial park home to some of the largest enterprises in the county and an array of small businesses. www.potb.org