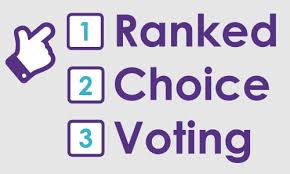 Ranked choice voting (RCV) is the new popular trend in American politics these days.  In August, Washington State primary voters will choose their candidates in their primary using this method.  It is also now the method used statewide in Alaska and Maine.  In November, Portland voters will decide if they want RCV to choose their city commissioners and mayor.

RCV eliminates the need for runoff elections, and also sometimes allows two candidates from the same party to move ahead to the general election. The process is based on the idea that the top candidates of all the voters should prevail.

As they mark their ballots, voters literally cast several votes for an office, marking their first and second choices, and sometimes up to five “rankings”.

This process is already in place or will be in the next year in ten states, in some federal, state, and local elections. This idea, and its many variations, are being widely discussed.

In Oregon, Benton County has adopted this for elections involving at least three candidates for county officers. (The Sheriff is exempt from this, per state law.) One of your choices can be a write-in candidate. The voters adopted this idea and amended the county home rule charter.  Tillamook County is a “statutory” county and not a home rule county, and it is unclear whether the voters here could adopt such a system without the blessing of the Legislature.

In New York City, you can have five choices, in rank order.

In Alaska, this reform has eliminated partisan primary elections, and voters can choose among all the candidates.  That state used the new system a few months ago for a special Congressional election with over fifty candidates, and election officials handled the new process with apparent ease. At least three states use this for presidential candidates.

RCV is also used by a number of universities and organizations for their election processes.

The arguments in favor include:

And the arguments against it include: