Much of the original forested floodplain along the Oregon side of the lower Columbia River has long since been logged off and diked for pasture. Blind Slough Swamp Preserve is an exception. This large Sitka spruce swamp represents a habitat type that was once common from Tillamook County to Alaska but is now globally rare. On Feb. 14 The Nature Conservancy transferred ownership of Blind Slough Swamp Preserve to North Coast Land Conservancy.

“Oregon’s land trusts play a critical role in our state’s future,” says Derek Johnson, director of protection and stewardship for The Nature Conservancy in Oregon. “After many years of partnership with North Coast Land Conservancy, we are proud to place the long-term care of Blind Slough Swamp Preserve in their capable hands.”
The Nature Conservancy’s Oregon office began conserving tracts of intact spruce swamp near Knappa, east of Astoria, in 1992, and by 2010 owned a total of 902 acres. Meanwhile TNC had begun collaborating with volunteers and staff from North Coast Land Conservancy, headquartered in Seaside, to help provide hands-on stewardship and monitoring for the property. The transfer of ownership makes it NCLC’s largest habitat reserve. 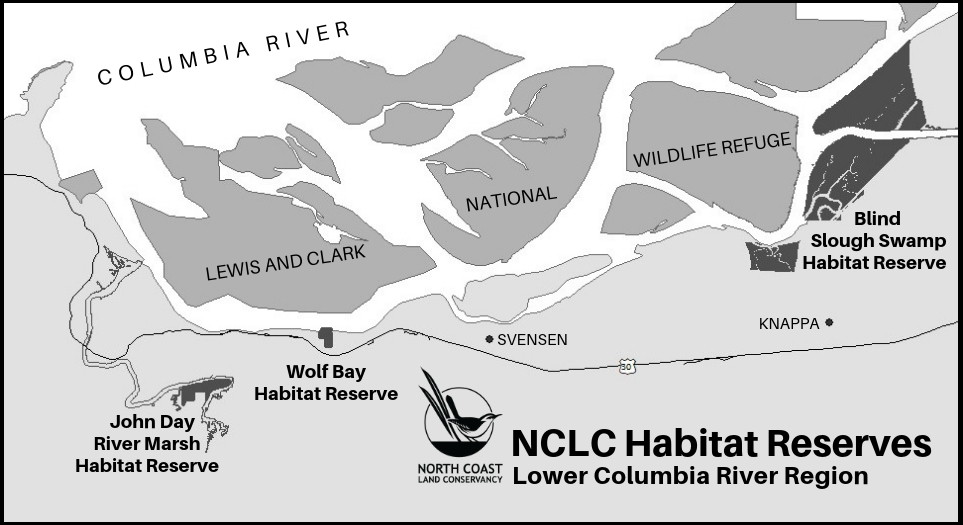 “It’s diverse, and very complex, and very special,” said NCLC Stewardship Director Melissa Reich. Reich organized work parties at Blind Slough Swamp from 2009 to 2012 as an AmeriCorps volunteer for The Nature Conservancy before joining the NCLC staff in 2013. “It’s unlike any other conserved land in this area at this scale.”
Blind Slough Swamp is considered the best remaining example in Oregon of this once-common habitat type. It is bordered on three sides by Columbia River sloughs and channels and is accessible only by boat. It is adjacent to Lewis and Clark National Wildlife Refuge, which multiplies its conservation impact.
“It’s one of the more extraordinary natural places I’ve had the pleasure of exploring,” said NCLC Executive Director Katie Voelke, who first became acquainted with Blind Slough while mapping invasive plant species there in 2005. “I’m excited that NCLC will now be its official caretaker.”
The preserve is dominated by Sitka spruce trees—some more than 400 years old—with younger western redcedar and western hemlock also present. Dense thickets of coast willow, Sitka willow, twinberry, and Nootka rose line the channels along with abundant sedges, wildflowers, and bulrushes. The preserve provides habitat for an abundance of birds, fish, and other wildlife, including bald eagles, osprey, river otter, beaver, coho salmon, nesting yellow warblers, olive-sided flycatchers, and rufous hummingbirds. Blind Slough Swamp will be managed by NCLC as part of its Columbia Quiet Waters Conservation Initiative, along with the Conservancy’s other properties on the Columbia and John Day rivers and a dozen preserves on the Warrenton peninsula.

North Coast Land Conservancy is a nationally accredited private, nonprofit land conservancy that has been working since 1986 to conserve and connect the landscape of the Oregon Coast from the Columbia River to northern Lincoln County by acquiring or otherwise managing lands for their habitat value. Transfer of Blind Slough Swamp to NCLC brings the sum of coastal lands it owns or manages to nearly 5,000 acres. NCLC has completed more fee-title acquisitions in Oregon than any other local land conservancy, ranking it alongside The Nature Conservancy and The Trust for Public Land for statewide conservation impact.