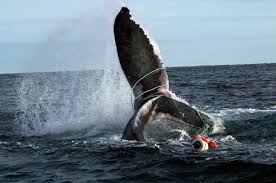 EDITOR’S NOTE:  This issue has recently come up on social media in Tillamook County after an encounter near Three Arches Rock in the ocean off of Netarts.  A video was shared on several community pages and reports were made to various local entities, including the City of Garibaldi.  Here is their response:  Per the recent community concern regarding the whale off of the Tillamook Coast, Garibaldi City Management contacted NOAA and received the following official statement. Please continue to heed the instructions from NOAA, and if there are any sightings of the whale please report them at the number provided.
The West Coast Entanglement Response Network overseen by NOAA Fisheries responded to a whale in distress that was thought to be entangled and anchored on September 20, 2020 off Netarts, OR.
The buoys associated with the original report were no longer present when the U.S. Coast Guard arrived on scene and the whale appeared to be free swimming and no longer anchored in place. When a team from our Entanglement Response Network subsequently located and approached the animal for better documentation and assessment, the whale continued to be free swimming and had moved several miles from the original location. Underwater footage collected did not show gear entangling the whale, but the water visibility was poor so this has not been confirmed. The animal did appear to be in poor body condition and a white mark on the peduncle was noted that is indicative of an entanglement or recent entanglement.
There was a secondary sighting of the whale on September 21st but NOAA Fisheries has not received any additional reports of this whale. People are encouraged to report entangled whales immediately to NOAA Fisheries’ hotline at 1-877-767-9425
Due to the dangerous nature of responding to entangled large whales, responders in the Network go through extensive training and many years of apprenticeship to learn the proper techniques and protocols to ensure their safety and that of the animals. Whales are wild animals that have unpredictable behaviors and should not be closely approached. NOAA Fisheries recommends keeping a minimum distance of 100 yards, and under no circumstances should anyone ever enter the water near a large whale.
To learn more about the West Coast Large Whale Entanglement Response Program please visit: https://www.fisheries.noaa.gov/west-coast/marine-mammal-protection/west-coast-large-whale-entanglement-response-program

At these meetings, ODFW will describe the newly adopted regulations to address whale entanglement
that will be in place for the upcoming commercial crab season starting Dec. 1. The Oregon Fish and Wildlife Commission adopted these rules at their Sept. 11 meeting in addition to rules which better align ODFW’s crab biotoxin rules with those of the Oregon Department of Agriculture.

Whale entanglements have increased since a marine heatwave began in 2014 and are particularly evident in federally listed humpback whales which forage in Oregon waters during the warmer months (April – November). Oregon gear has been confirmed on entangled whales observed as far south as Mexico and as far north as Washington. While reports of whale entanglements are likely rising in part due to public awareness, research is demonstrating the biggest factor may be changing ocean conditions which altered where and when whales migrate and feed.

ODFW’s Dr. Caren Braby is leading the agency’s effort to find creative ways to support the fishery and address critical conservation issues over the long-term.

“It’s important to balance our stewardship responsibilities for both the recovering humpback whale populations and Oregon’s iconic Dungeness crab fishery,” Braby said. “Our goal is for the two to co-exist and thrive.”

The Working Group meetings led to the beginning of a research project to fill the critical information gap on where and when whales are feeding in Oregon waters. Oregon State University’s Dr. Leigh Torres leads the project funded by the Oregon Dungeness Crab Commission and NOAA (National Oceanic and Atmospheric Administration). Oregon Sea Grant, ODFW and the U.S. Coast Guard partner in this important project.

The adaptive management approach of the conservation plan will be the focus of the Oct. 8 and Oct. 22 meetings which run 1-4 pm. For agenda items, visit the commercial Dungeness crab industry notice.