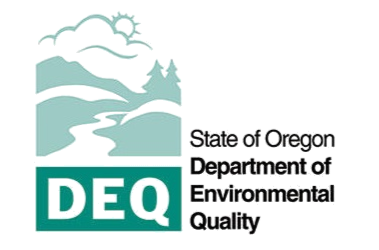 UPDATE: (Friday July 26, 2019)
A second round of sampling from Tillamook Bay was conducted yesterday morning (7/25), testing for fecal coliform. Results indicate that Tillamook Bay has been unaffected.
Also on Thursday, the Port pumped out water and material from below the stormwater outfall to ensure that any remaining treated liquid manure, or digestate, that had not traveled downstream would not have the opportunity to do so. DEQ issued the Port an emergency land application permit, which allowed the Port to apply the 35,000 gallons they removed from the pond across several hundred acres of grass at the Tillamook Airport.
As of Friday, July 26, it is estimated that cleanup efforts led to the reclamation of 260,000 gallons of digestate, or 87% of what had been released.

(July 25, 2019)
Tillamook, OR—Around 9 a.m. on Monday, July 22, 2019, the Port of Tillamook Bay informed the Oregon Department of Environmental Quality and other agencies, through the Oregon Emergency Response System, of a release of treated waste from the manure and waste digester located at the Port (6018 Hangar A Road in Tillamook). The Port owns the facility and works with Tillamook Biogas LLC and their contractor, Regenis, to operate the digester. The digester, which processes cow manure into usable fertilizer and biogas, operates under a solid waste permit and industrial stormwater permit issued by DEQ to the Port.

The release happened sometime after facility staff left Sunday evening. The release appears to have originated from some underground piping between a tank and a separator unit. The waste was digested, which means the amount of bacteria and pathogens was significantly reduced. Approximately 300,000 gallons of the treated waste, also known as digestate, was released on site. A portion of the digestate traveled through the stormwater system around the facility and through piping and ditches that ultimately lead to Anderson Creek, approximately 2,400 feet southwest of the digester. The source was contained on Monday and digestate is no longer leaving the site.

Anderson Creek flows about two and a half miles before entering the Tillamook River, which flows another five miles before entering Tillamook Bay, a shellfish harvest area for recreational and commercial users. The pollutants of concern with this digestate are bacteria and the potential for the wastes to use up the dissolved oxygen in the water. Dissolved oxygen is essential for fish and other aquatic life that breathe in the water.
Since the release was reported, the Port and contractors have been containing the release, putting the recovered digestate into structurally sound containers on site and cleaning out the stormwater conveyance system to prevent any digestate still in the system to move downstream.
DEQ, the Oregon Department of Agriculture, and the Oregon Department of Fish and Wildlife had staff at the facility quickly and began sampling Anderson Creek, the Tillamook River, and Tillamook Bay. The results as of today are as follows:

• Results from testing in Anderson Creek at Highway 101, approximately one mile from the outfall, and in Tillamook River met the standard DEQ uses to protect human health during contact recreation.

• Results show that Tillamook Bay water quality is well within the normal range and thus no closure of shellfish harvesting was needed.

• The Oregon Health Authority has no restrictions or advisories on coastal beaches at this time.

In a pool below the outfall at Anderson Creek, e. coli was found to be higher than DEQ’s standard and ODFW found dissolved oxygen was very low. Low dissolved oxygen caused approximately 100 minnow-sized three-spined stickleback fish in this pool to die after the initial release. No dead fish were found further downstream. As of this morning, approximately 50 live three-spined stickleback fish were found in the pool. This location will be pumped out by the Port to keep the digestate from flowing out of the area.

DEQ and other agencies will continue to coordinate their efforts, review sampling results and monitor Tillamook Bay.