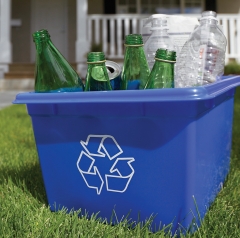 This is in response to: tillamookcountypioneer.net/call-to-action-curbside-recycling-in-north-county/

Your attention to recycling is commendable. Unfortunately, not all recycling is equal. Commingled is recycling in name only: once different plastics are combined they are difficult and very expensive to separate, and the incidence of contamination by nonrecyclable materials and those that have a little triangle but no market is very high. Consequently, less than 10% of plastics were recycled even before China stopped accepting our waste. Commingled is a feel-good measure with a dark secret, one that encourages people to make lazy purchasing choices and think of recycling, like garbage, as someone else’s responsibility.

CARTM was very responsible and honest: they did not accept anything for recycling that they could not put into the recycling or reuse process. That is the feedback loop missing from commingled: it all just goes “away” – just like garbage. https://www.oregon.gov/deq/FilterDocs/plasticRecovery.pdf
Canceling the CARTM contract does not change the conditions of the global recycling market, it just hastens the date when the Coffin Butte landfill will be full without putting one bit of effort into planning for that eventuality. http://www.corvallisadvocate.com/2013/0131-corvallis-landfill-filling-up
(Note: the estimate of 40 years’ capacity was made in 2013, when the quantity of plastics discarded by Americans was far lower; more plastic was manufactured between 2004 and 2017 than in the previous 50 years, and that rate is increasing.) https://www.theatlantic.com/science/archive/2017/07/plastic-age/533955/
Commingled must be sorted. While there are some partially automated facilities like Recology’s state-of-the-art Shoreline facility in San Carlos, California, a great deal of human labor is still involved, and the amount sent to the landfill is still considerable – just concealed from consumers. Oregon’s commingled plastics (metals are easily separated mechanically, and deposits encourage people to use the container return process) were, until recently, being sent to China for separation and processing. Not only is this a colossal waste of fuel and other resources, much of the material ended up in landfills there, so we were really just exporting our pollution problem. That is academic now, as China is no longer accepting plastics.
Sorting is a dirty, dangerous job with low pay and no security. The ease of curbside commingled encourages people to put just about anything in the blue bin, often without rinsing, so sorters must handle moldy containers, broken and jagged items, medical sharps and other dangerous items at speed, leading to workplace injuries and infections. Even the Shoreline plant with its optical scanners and air jets requires humans to spend all day bending over speeding conveyors, grabbing inappropriate materials and quickly redirecting them, in a noisy, smelly, unsanitary environment; the overwhelming majority of separation is done without these aids. While I very much admire the
effort and engineering Recology put into Shoreline, it is unlikely that Oregon is going to want to pay the millions of dollars it would take to build a duplicate.
Your dedication to recycling is admirable, but I would urge you to direct that energy toward pressuring the County Commissioners to take another look at the contract with CARTM: it will be more expensive for the County to run the transfer station themselves, which is more of your tax dollars, and they will be putting more in the landfill.
Once CARTM is back in Manzanita, get involved in learning exactly what is recyclable and what is not, and adjust your consumer choices accordingly – recycling is better than the landfill, but better still is not generating the waste in the first place. When yogurt tubs were no longer marketable, my family chose to learn to make our own in Mason jars from local Bennett Farms milk, which comes in deposit-return glass bottles. It is super easy, has no additives like store-bought and is delicious! Now we wouldn’t go back even if we could recycle the containers.
>Miel Macassey, Rockaway Beach